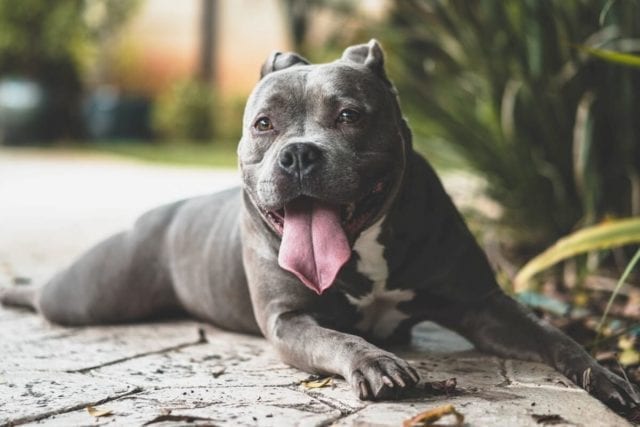 The Pitbull is a dog whose character is often controversial, It sports a body with strong musculature. The Pitbull is actually an almost perfect dog for families with children, only if it’s adopted at a very early age.

With a good education, its aggressiveness will be erased and it will then present qualities of gentleness, calm, and loyalty. It does not present any disease and is rather easy to maintain. A very good choice even if each outing in public must be accompanied by a muzzle and a leash.

The American Pitbull terrier would be born from a cross between bulldogs and terriers at the beginning of the 19th century in England in particular. At that time, this breed of dog had to face bulls or bears in arenas.

In the United States, the pitbull terrier has also been widely used for dogfighting. It wasn’t until these dogfights were banned that the American pitbull terrier became a domesticated dog and popular as a companion dog.

In view of its history, the pitbull remains a dog with a strong and marked character. They are not mean or dangerous dogs, but they are dynamic and self-confident dogs. Its education and socialization must therefore be adapted and rigorous. In addition, the American pitbull terrier will require a responsible and experienced master.

It’s an easy breed of dog to train if the owner is aware and responsible for his/her dog. It will be necessary to find the right balance between rigor and gentleness. You should never be violent or brutal, however, a certain consistency will be essential to its good balance.

Finally, it is a very energetic and dynamic dog, it will therefore be necessary to respond correctly to its needs, otherwise, its education will not be possible.

The Pitbull is not a “killer”, but a dog that overflows with energy and needs to exercise. It can’t stand being in confined spaces for too long. A country garden or a large courtyard would allow It to stretch Its legs.

Otherwise, one or more daily walks are necessary. In the countryside or in the city, the Pitbull must be muzzled and kept on a leash during each outing in public.

The Pitbull has very good health. it rarely gets sick. It has no genetic pathology. However, due to a very short coat, it is particularly sensitive to heat and the cold. It will therefore be necessary to not to take it out during winter and to avoid the sun rays in summer. The Pitbull can be prone to various illnesses such as  allergies and dermatitis

The life expectancy of a Pitbull is, on average, between 11 years and 13 years.

The Pitbull does not require any special attention compared to its congeners. It requires little grooming. Check their skin regularly for any skin conditions. Weekly brushing is more than enough for this dog who loses little hair.

Occasionally, a rubber brush will suffice to remove dead hair. it is advisable to check the condition of the Pitbull’s eyes as well as its teeth. Do not hesitate to brush it off if tartar settles on it.

The Pitbull can eat a bit of anything. Whether it is high-quality croquettes available in specialty stores or human food based on meat, starches, and fresh vegetables. Do not hesitate to add a little olive oil for example, which adds vitamins and minerals essential to its development.