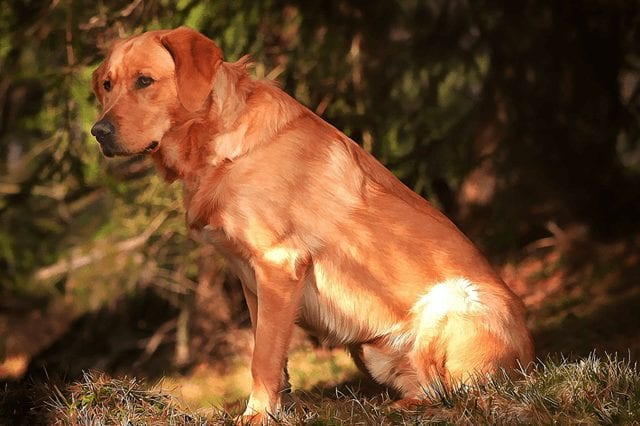 The red fox labrador is a color that does not render as much in the photo as it does in life: seen up close it looks so wonderful that it is difficult to take your eyes off it.

The red fox color does not represent a different color of the yellow labrador, but it is simply a darker shade: it is the ancient coloring of yellow, as it was at the beginning of its history when this type of coat was much more present, then it developed to lighter shades through the selection of breeders.

The Red Fox is nothing more than a darker variant in the shade of the yellow Labrador .

The American Kennel Club (US Registry of Purebred Dogs) clearly states that yellow Labradors can range in color from fox-red to lighter cream to white.

It follows that the term “red fox” to indicate the color of this Labrador is improper since it is always a yellow Labrador, although the comparison with other variants of yellow subjects may suggest that it is not.

From the very beginning of the Labrador’s history, most of the red fox subjects were selected from birth.

Through this selection of the darker color, in a fairly short time (in the first decades of their history), the fox red and dark yellow labrador retrievers were among the most popular.

In the past, however, fox red labradors were less common than black labradors: these dogs were used for work mainly in hunting: for this use, they tended to prefer black labradors over others.

The curious thing is that in the past fox red labradors were more common than light yellow ones: the first officially registered labrador in 1899 ( Ben of Hyde ) had a dark golden color, tending to fox red, a coat that was maintained at least until the 40s.

From the mid-1900s on, things changed: lighter yellow and cream-colored Labradors became more common than fox red ones by choice of breeders.

In 1944, experiments conducted by Oswald Avery and colleagues identified  DNA  (deoxyribonucleic acid) as the material in the cell responsible for carrying genetic information. Later, DNA was rightly called “the thread of life”.

The sequences of nucleotides, small molecules linked together that form two complementary chains to compose the native double helix shape of the DNA molecule, are responsible for coding specific proteins required for many cellular functions. These proteins are essential for the proper functioning of the organs which, in turn, are necessary for the normal function and duration of the whole organism.

In canine somatic cells (cells responsible for the composition of the body), DNA is packed into 78  chromosomes.

Germ cells differ from somatic cells in that they divide through a process known as meiosis. As a result of meiosis, each germ cell receives one of the partner chromosomes so that it has one chromosome of each type.

Meiosis, therefore, provides the means by which offspring can inherit genetic information from each parent while maintaining the same number of chromosomes in its somatic cells as found in the somatic cells of each parent and in other individuals within its species.

When germ cells fuse during fertilization they produce a single somatic cell from which offspring will develop. This somatic cell will divide to produce more cells through the mitosis process.

During mitosis, before a somatic cell divides, each chromosome will be duplicated so that a canine cell just before dividing will have 156 chromosomes (or 78 chromosome pairs).

The composition of each of the chromosomes, the DNA to encode specific proteins that are responsible for producing individual genetic traits, or characteristics, are called genes.

However, although the location of a gene locus is identical for each partner chromosome, the nucleotide sequence of the gene can be different on each of the two paired chromosomes.

When this happens and the DNA nucleotide sequence to encode a specific protein is altered, a condition referred to as a mutation, the resulting protein can physically and functionally differ from the normal protein.

For this reason, since more than one nucleotide sequence of a gene can be present at one gene locus on partner chromosomes, alternative sequences that control a particular trait are referred to as alleles.

When offspring are heterozygous at a particular gene locus, often the characteristic of only one of the alleles will be expressed by the offspring. In this case, the allele that results in the expression of the trait is considered dominant with respect to the other allele that is considered recessive.

Black Labradors can be homozygous for black (BB) or heterozygous (Bb). In the latter case, the subject carries an allele for chocolate coloring, but his expression is masked by the dominant allele for black.

Heterozygous Labradors can only produce chocolate-colored offspring if they are born from a Labrador heterozygous or homozygous for the recessive “b” allele (chocolate Labrador). For a Labrador to appear chocolate, he must inherit the “b” allele from both parents.

As we know, the color of the coat is given by the presence of melanin (a substance that gives color and is produced by specific cells called melanosomes).

The color of melanosomes is linked to the amount of melanin that they themselves contain, in the hair, so there can be two types of this particular element: eumelanin which determines the presence of the black or brown color, and pheomelanin which instead determines the yellow color of the mantle.

The black coloration is due to specific genetic conditions and the necessary one is the presence of the B gene; here are the genotypes needed to obtain this particular pigmentation:

From the combinations of black, red, and white the different shades of colors. The study of coat color variations is the most complex and interesting subject that can fascinate a breeder, in order to be able to better select their bloodline.

The study of coat color variations began approximately in the early years of the last century, together with genetic evolution, after the rediscovery of Mendel’s laws.

In Labrador there are two groups of genes (E, B) that control the colors of the coat: one type (E or e) controls the colors black, chocolate (dark colors) and yellow (light colors).

The second group of genes affects dark color (B or b). These genes control that the black (dominant color) and brown  (recessive) Labrador are dominant over the yellow color. The Labrador BB (dominant) or Bb will therefore be black.

Since the two pairs of genes are paired, the possible combinations are:

The genetic combination of eebb leads to a Labrador called “ Dudley “, which is a yellow Labrador with the pigmentation of chocolate Labrador.

This type of Labrador is not recognized by current official breed standards even though he is very likable!

A red labrador fox is simply a variation of yellow. The shade of yellow needed to produce the red coloration is controlled by a pigment called pheomelanin which is controlled by two other different sets of genes, A and C.

The A gene controls the production of the color red and the C gene controls whether it is fully expressed or diluted. These genes do not cancel each other out like other genes. They work together to produce a variety of different shades, from pale yellow to rich fox red. As you can see, fox red is a rare color.

As previously pointed out, red fox Labradors are present in fewer numbers today than in the past, while the lighter ones are much more common.

Why? The reasons could be the following:

Both of the events just mentioned probably played a major role in changing people’s perceptions of what a true yellow Labrador looks like.

It must also be said that although breeders have long selected mainly light yellow or cream-colored Labradors, in recent years the different shades of yellow Labradors have expanded again.

While in the past, pale yellow Labradors were seen as rarer, more exotic, and therefore more desirable, today it is the complete opposite, and “fox red” red fox Labradors are making a comeback.

Are red fox labradors purebred? Of course yes, precisely because their history dates back to the beginnings of the history of this breed.

Therefore it’s certain that they have never crossed with different breeds, unlike the Labrador Silver which is probably a genetic cross with the Weimaraner, in order to have their typical gray coat.

Traits of The Red Fox Lab

As noted above, color does not in any way affect the character of the animal.

Labradors have the following qualities :

Dogs of this breed are very attached to their owners. In their absence or with a lack of attention, the animal can bully and howl out of boredom.

You can add to the above positive qualities :

Labradors also have their downsides :

The average lifespan of a Labrador is 10-14 years. Despite its activity, this breed suffers from a variety of genetic diseases.

Obesity comes first as these dogs love to eat everything. It also exacerbates other existing illnesses.

The most common diseases in Labradors are :

The cost of a puppy consists of a number of indicators. First of all, you need to decide on the purpose of adoption.

If It’s just a friend for the family, without the prospect of participating in exhibitions, then you can take a puppy without a pedigree. They will be much cheaper.

For the rest, the price depends on the following parameters :

Specifically, red dogs fall under the breed standard, however, as mentioned above, experts may not approve of the color. Based on this, the cost of a red puppy will be noticeably lower than a black one. A red lox lab has an average price of 1200 to 1800$.

Although fox red labradors have been increasing lately, their light yellow “brothers” are still much more prevalent.

The price of a red fox labrador puppy with all the certifications and important bloodlines  can range from 2,500 to 3,000 Dollars.

How to choose a red puppy?

The optimal age for buying a puppy is 2 months or 3 months.

By this time, the breeder should have done all the necessary vaccinations and socialized the dog. The color will already be permanent.

What to look for when choosing a puppy :

Responsible breeders will always help in the future if you have any questions about the content.

The Labrador Retriever is the perfect friend dog. Whether you are an elderly person, a young family with children, or just leading an active lifestyle, this dog will suit everyone. Pay more attention to It and It will answer you with great and sincere love and devotion.

Can a Chocolate Labrador Have Blue Eyes?
The Silver Lab a Sweet Reality or a Fictional Lie
Choosing a Male Dog
Choosing a Female Dog
10 Tips for Traveling With Your Dog