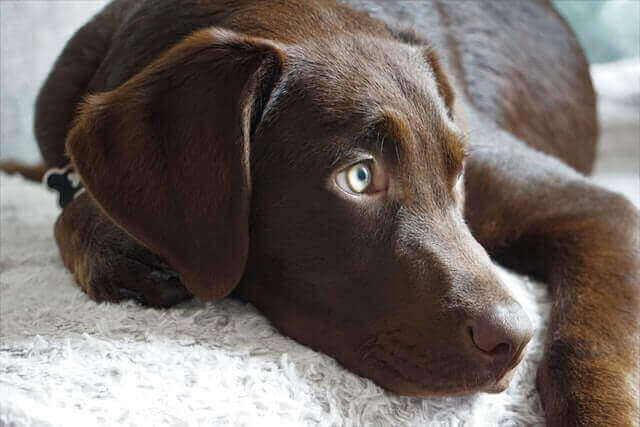 The color of a Labrador dog can be overwhelming when buying a dog.

for some people the brown Labrador is a color to favor because of its originality, for others on the contrary it is quite the opposite.

Whatever the color ..  the most important thing is to love your dog whatever Its appearance?

Especially since the brown labrador does not have any major difference in structure compared to the golden or black labradors.

The one and only difference is in the hair of Its tail. Indeed, the brown labrador has hair on its tail that curls slightly more than the labradors of different colors.

However, it appears that brown Labradors are more difficult to train for a breeder than golden-colored ones. This still remains to be proven.

History of The Chocolate Labrador

Initially, the chocolate Lab was considered a tribal marriage. Such puppies were given to some farms, awarded the title of “outcast” and not allowed to participate in breeding in order to eradicate the “brown gene”.

This has been the case for almost a hundred years.

However, gradually the brown Labrador retrieved the right to full recognition. This color began to be recognized as a “classic of the breed” along with the black and gold just a few years ago.

But perhaps this is due to the fact that a new “outcast” has appeared?

Recently, cases of the birth of Labradors with a silver coat color (coal, asphalt, and other shades of gray) are not uncommon and they are not yet treated in the best way, considering them a mixed breed, as they once considered the chocolate.

The color combinations in the brown labrador

As we have already mentioned in the article dealing with genetics on coat color, all this depends on important “genetic games”.

In Labradors, coloration is determined by two pairs of genes, one specifies expression and another specifies the color.

Without a shadow of a doubt, we can say that the brown color is still less known today  (although as we will later see from a genetic point of view, the yellow one is the most particular).

Genes are inherited either from the mother or one from the father and can be dominant and recessive.

In order for the puppy to be born with this pigmentation it will logically be necessary for this gene to be dominant (we indicate it with b) and the only two genotypes that can allow this are the bbEE indicative of a pure brown Labrador or the bbEe, also here we will have a chocolate Labrador but with a yellow recessive gene.

The brown Labrador presenting the first genotype (pure chocolate) are the most prized and sought after.

The gene that determines whether a Labrador Retriever is black or brown is tyrosinase-related protein 1, or TYRP1.

There are four known alleles in this gene in the Labrador Retriever: one is the allele for black (referred to as B) and three different alleles that result in chocolate (commonly referred to as b).

In determining whether the pups will be black or chocolate, the black coat color (B) is dominant over the chocolate (b).

Therefore, a puppy will only be brown if each parent contributes a chocolate (bb) allele.

If one or both parents (Bb or BB) contribute to the black (dominant) allele, the pup will be black (BB or Bb), although a Bb pup would carry chocolate and could therefore produce brown-colored pups.

A brown colored Labrador can have two possible combinations:

The Health of The Brown Lab

Labradors have an average life expectancy of 10-13 years.

In terms of vision, a Labrador can have problems such as cataracts and retinal detachment. Both of these problems will lead to pet loss of vision.

Dysplasia of the elbow and knee joints, osteochondrosis are new diseases that Labradors have recently begun to undergo.

Given that dogs are naturally fantastic swimmers, they need frequent contact with water. This is due to the fact that if the dog does not make marches in the water for long distances (which, in principle, can be replaced by running), Its metabolism slows down. This can lead to obesity and joint problems.

Fortunately, most diseases can be treated. Therefore, when faced with any health problem of your pet, do not delay visiting the vet

Due to the fact that labs might be prone to ears infections, caring for them should be a daily routine. Veterinarians recommend that you regularly check your lab’s ears for any possible infections, as well as cleaning them.

Labradors have a coat that is water-repellent, so they practically don’t need bathing with shampoo.

The standard four washes per year are enough. It is recommended to comb the coat at least a couple of times a week.

Despite the fact that labradors are not susceptible to digestive diseases, it is necessary to brush the dog’s teeth.

Popular Nicknames For Males and Females

Having made the decision to buy a chocolate Labrador retriever, the question arises about the name.

Considering that the breed is distinguished by its peacefulness, a complete lack of aggression and boundless love for all living things, the pet’s nickname should be soft and affectionate :

Price and How to Choose a Lab Puppy?

The price of a Labrador can indicatively go from 1,200 to 2,000 Dollars (prices are purely indicative).

In order not to become a cheated buyer, there are a few things you need to know about retriever puppies.

A puppy at two months of age should weigh 12-16 pounds. If the puppy weighs less, It might be a disease that can affect Its growth.

If the puppy weighs more, it means that he is not given the required amount of activity (perhaps they are not playing with the baby), or the puppy has metabolic problems. The moment of overfeeding also takes place, especially for novice breeders..

IMPORTANT!
The puppy should show a high level of interest in everyone that approaches it.

5 Important Things To Teach Your New Dog When It Arrives Home
Why Should You Choose a Medium Dog Breed?
10 Tips for Traveling With Your Dog
Why Should You Adopt a Small Dog Breed?
The Silver Lab a Sweet Reality or a Fictional Lie