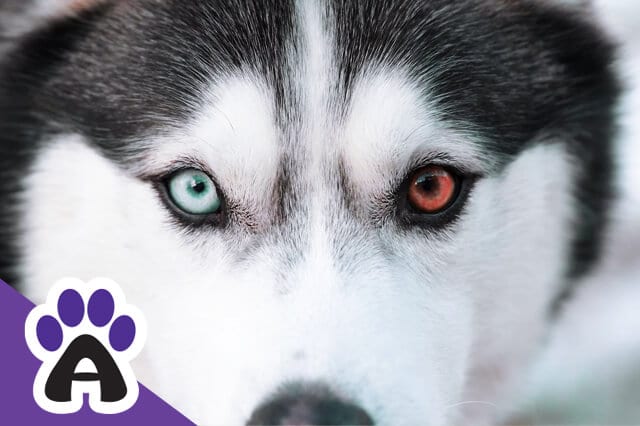 Huskies act in movies, become stars of social media, and participate in promotions. They owe this fame to their unique appearance.

The mask on the face of a purebred husky gives it charisma and expressiveness. Ice-blue, chocolate-brown or multicolored eyes keep your gaze on. But does the standard allow a different color of the iris in a husky?

What Color Are The Eyes Of A Husky?

Various shades of the listed colors are possible. Husky with green eyes does not exist, but an olive shade is possible. This color is found in brown-eyed dogs.

Other colors are not specific to the breed and indicate that the dog is not purebred.

The most popular and most common are the blue-eyed huskies. Previously, this color of the iris was considered a defect. The breeders were convinced that the blue color of the iris indicates blindness or poor vision. Blue-eyed dogs were not allowed into breeding. That is why, among other northern breeds, dogs with blue eyes are rare.

During breeding work with huskies, breeders, on the contrary, focused on breeding blue-eyed pets, which became the hallmark of the breed.

The iris has a heavenly color, it is surrounded by a dark rim. The shade is light, making the animal’s gaze seem piercing and frightening.

This breed feature is associated with a genetic abnormality that does not affect the dog’s health in any way. It occurs due to an insufficient amount of pigment in the iris. Visual acuity does not suffer from this.

All husky puppies are born with blue irises. It is possible to be sure that the eyes of the husky will remain so for life only when the animal is six months old.

This is why the breeder’s assurances regarding the puppy’s blue eyes should be treated with caution.

Dogs with brown eyes are not much less common than their blue-eyed counterparts. The shade of the iris can range from honey to black. In brown-eyed huskies, the iris is saturated with a sufficient amount of pigment, so its color is bright and dense.

Brown eyes are found in all colors of the breed. They look best in red and chocolate colors, which have brown noses.

The amber eye color looks impressive. Under certain lighting conditions, it appears golden or bright orange and sometimes has a green tint.

Husky with different eyes is a common sight for the breed. Different color of the iris among dog handlers is called “harlequin”. This genetic abnormality is not considered a marriage and is tolerated by breed standards. The odd-eyed huskies are popular among dog breeders because of their uniqueness.

Different colors of the irises are found in humans and in all animal species. This genetic anomaly is called heterochromia. In this breed, it has a hereditary character. In most cases, a dog has one blue iris and one brownish iris.

Puppies with heterochromia often appear in parents whose eyes are blue and brown, and animals with different colors of irises are able to give birth to ordinary offspring. The reason for this anomaly is a lack or excess of pigment during the formation of the pup’s iris.

Different eyes in a husky do not affect the visual acuity of the animal. This feature does not pose a health hazard, so you can safely buy a puppy with heterochromia.

However, it is not always normal for a husky to have a different eye color. Some diseases can cause color change. Acquired heterochromia is possible for the following reasons:

If a dog with a difference of eyes has vision problems, this is also abnormal.

Painful reaction to bright light is characteristic only of albinos. Clouding of the iris and pupil is a sign of illness.

If all these symptoms occur, you should immediately consult a doctor.

When Do Puppies Open Their Eyes After Birth?

Husky puppies are born blind. Their eyelids are underdeveloped. At first, the puppy is guided by hearing, and the mother takes care of him.

The crumbs begin to open their eyes 10-14 days after birth. Most often, both eyes open at once. But it happens that one is late for a couple of days – this is considered the norm.

All puppies develop differently, and therefore a slight delay is not a reason for panic.

If on the 18-20th birthday the baby is still blind, the husky’s eyes should be rinsed with clean water. Inflammation or redness signals a pet’s health problem. The kid needs to be shown to a specialist.

Important! If your puppy is 30 days old and his eyes still haven’t opened, you should see a doctor.

Does The Eye Color Change Over Time?

All newborn husky puppies are blue-eyed. As soon as the puppy has opened its eyelids, it seems that its cornea is covered with a white coating. This is normal, because it has not been fully formed. During this period, the baby sees only light.

The cornea is finally formed on the 25th day from birth. The look becomes meaningful and focused.

Over time, the color of the iris changes. When exactly the change will take place is impossible to say for sure. For some puppies, everything becomes clear already at the age of one month. By six months, all husky puppies acquire a constant eye color. If the irises are still blue by this time, they will remain that way.

Important! A change in eye color in a dog over a year old only indicates a health problem.

Huskies have an unusual appearance, which is the reason why dog ​​breeders all over the world love them. And it’s not just the color and the great similarity of sled dogs with wolves.

For a breed, an anomaly is considered normal, due to which dogs can boast of bright blue, as well as different eye colors.

To this should be added the different colors, the main characteristic of which is the unique mask.

But do not forget that despite their attractive appearance, northern dogs have a difficult character.

These are sled dogs that need long active walks. They are not easy to get along with, and in the absence of training, they become uncontrollable.