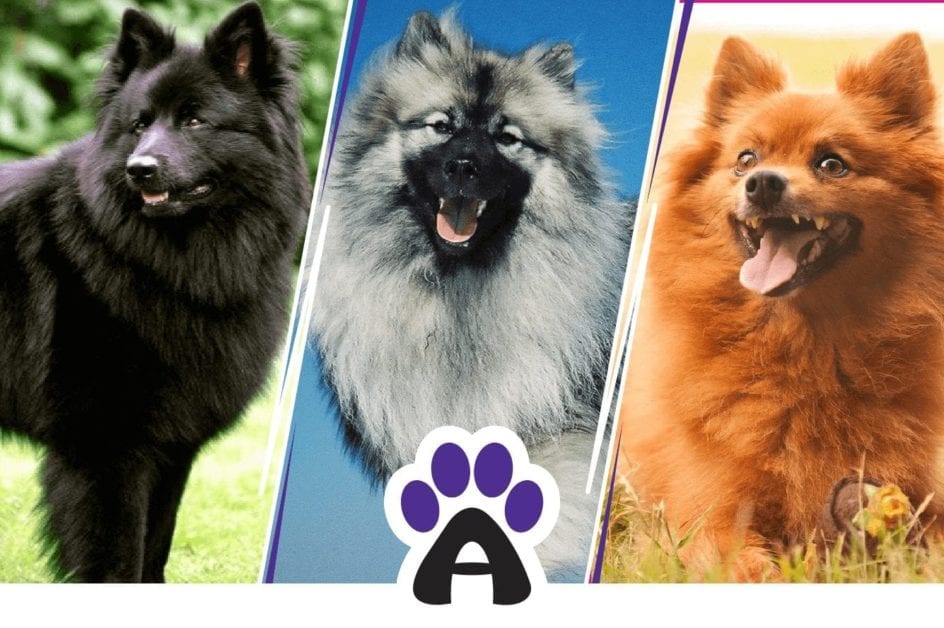 Over the years, during which selection work was carried out with the breed, a large number of various colors have been bred.

Some Spitz colors are considered quite rare. It is quite difficult to find perfectly black, brown, gray, and white colors. That is why Pomeranian puppies of these colors are not so easy to acquire, but they are more expensive than others.

Contents hide
1 Varieties and Color of Spitz
2 Grooming and Hygiene
3 How Much Does It Cost And Where To Buy?

Varieties and Color of Spitz

Spitz belong to a large group of dogs that includes many breeds. They are characterized by the following colors:

White Spitz is one of the most sought-after, but complex colors. A small snow-colored dog, fluffy, graceful will surely attract the attention of others. To win at shows, the color must be perfectly white without spots. The lips and nose are black, the eyes are dark brown.

Unfortunately, it is common to see white dogs with small spots behind the ears, or on the sides, which is a disadvantage. Breeding white oranges should be treated with caution, as the combination of this color with others leads to the appearance of spots on the coat, which is considered a disadvantage.

A white Pomeranian puppy must have white parents, otherwise, it is highly likely that after the first molt the dog will darken significantly.

The black Pomeranian has a dark undercoat and skin. No light spots on the coat. Sometimes it seems that the undercoat is dark brown, but after seasonal molting, it darkens again. A perfectly black puppy can only appear on completely black parents.

Black Spitz and tan. The dog is black, but there are red or yellow spots on the face, chest, limbs, under the tail. The tan becomes brighter with age.

The red color is the most frustrated among the representatives of the breed. Black blotches are not allowed, but lighter areas of hair on the face, pants, tail are quite possible. Shades can range from bright red to peach. These include the orange color, which is less intense than the red one.

Cream Pomeranian is a rather rare color, as cream puppies before the first molt are often confused with white and red puppies. It is finally formed by the year. It can be quite bright, beige, or very light.

Brown color is not very common. It is also called chocolate. Chocolate Spitz is characterized by a rich brown color, without spots or bleached areas. Brown lips, nose, and eyes are permitted by breed standards.

The blue color is very rare. It is a palette of gray shades. It is often also called marble or gauze. Puppies of this color are the most expensive.

The zone gray or wolf color is characterized by a black undercoat and a silvery gray guard hair, dyed black at the tips.

Color saturation can be varied

light gray or dark pomeranian. There is a mask on the face. Above the eyebrows and at the tip of the tail, the tone can be much darker. Dark horizontal stripes run from eyes to ears. The lower part of the tail and pants are of a light shade.

is characterized by a white background and black, red, or brown spots. The spots are evenly distributed throughout the body, have clear boundaries, and are saturated.

is characterized by a light color at the roots, dark at the very tips. In this case, the main color can be red, cream, gray or orange. The muzzle and ears are the same color.

Pomeranians are very fluffy, which means that their thick coat must be well looked after. Due to the structure of the coat, oranges are not prone to mats, so during normal times, the dog should be brushed once a week.

Important! The first molt in puppies begins at 2-3 months and lasts up to a year.

It’s not worth bathing an orange once again. Water treatments do not have the best effect on the quality of the coat. It is worth washing the dog only when it gets dirty or before exhibitions. The condition of the eyes, teeth, ears of the pet should be monitored regularly.

The eyes are wiped with a clean cloth moistened with drinking water. Brush your teeth with a special brush and toothpaste. Clean the ears with a regular ear stick.

To give the thick coat of Pomeranian dogs a beautiful shape, grooming is done. In this case, only the guard hair is sheared.

Important! In no case should the undercoat be sheared or shaved off, since it is not restored in Pomeranians.

How Much Does It Cost And Where To Buy?

When it comes to pricing, a big role is played by a dog belonging to a show or pet class. Representatives of the show class have colors that correspond to breed standards, are promising for participation in exhibitions. Pet dogs may have uneven color, deviations from breed standards. In doing so, they can become wonderful companions.

When buying, preference should be given to a nursery with good reviews. There are frequent cases when unscrupulous sellers give out one type of orange after another. In addition, it is not always possible to determine from a Pomeranian puppy what color it will have when it grows up.

After molting, a white Spitz puppy can darken significantly. Therefore, if there is a desire to purchase an orange of a certain color, then you need to either ask for information about the pedigree from the breeder, or buy a dog that is already a year old.

During the first molt, not only the color changes but also the quality of the orange dog’s coat. Often, breeders try to sell a puppy before the first molt, because during this period the puppies have the most attractive appearance.

After the puppy’s coat begins to change to an adult’s, the puppy will significantly change its appearance: it will seem peeled and ugly. Only by the age of four months, it will be possible to determine exactly what the dog will be. And the final color will be formed only by the year.

Interesting! To determine what color the Pomeranian puppy will be when it grows up, it is worth looking at the patch of fur behind its ear. But it is worth remembering that this method does not always give a guaranteed result.

As a result of selection work, Pomeranian Spitz of various colors were born. Now anyone can choose a dog to their liking.

However, due to such a variety of colors, there were also problems with determining the color of the puppies. That is why it is important to know all the rules of color inheritance. A good breeder is obliged to keep a pedigree of their pets, which contains information about the color of the Spitz.