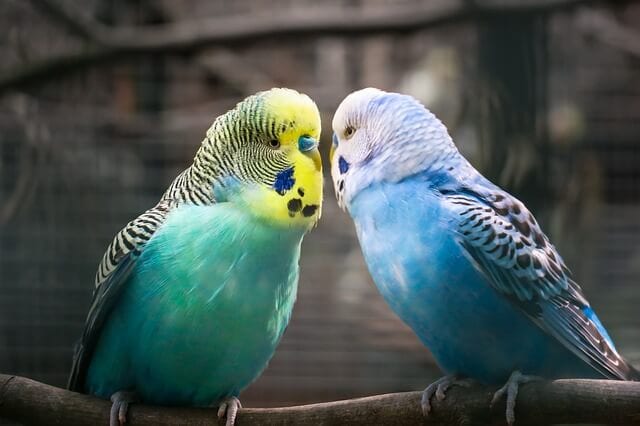 The budgies parakeet are among the most popular pet birds, almost everyone knows someone who has one! If you wish to have a bird and don’t have the time, space, or money to afford a larger parrot, the parakeet may be the right choice for you!

In this article, I’ll introduce you to 25 fun facts about parakeets to help you get to know them.

1) Budgies have a third eyelid, which is not visible, which is important for lubricating the eye and keeping it clean.

2) The parakeets, in their history, have had many names in different parts of the world: canary parrot, zebra parrot, wavy parakeet, shell parrot.

3) Budgies have a very high resting breath rate, between 65 and 85 breaths per minute.

4) The heartbeat is also very fast, it cannot be monitored by simply counting: it exceeds 300 beats per minute!

5) The original colors were yellow and green. The second color was completely yellow, bred from a genetic mutation. The first blue budgie was not seen until 1878!

6) They have a so-called monocular vision: they can move and see in each eye independently of the other.

8) Budgies grind their beaks when happy and relaxed, like cats and purrs.

9) The bones of parakeets (and all other flying birds) are hollow, filled with air sacs rather than bone marrow.

10) Budgies have more vertebrae in their necks than humans, which allows them to rotate their heads 180 degrees.

11) Budgies can afford to lose 10-12 drops of blood before they bleed to death.

12) The skeleton of female parakeets increases in density during the mating period, as it accumulates calcium to support gestation. The bird can gain up to 20% of its weight during this time!

13) The eggs of the parakeets are porous, to allow the passage of oxygen and carbon dioxide.

14) Females understand when it’s the mating season thanks to the shortening and lengthening of the days. Artificial light alters this mechanism.

15) In mammals like us humans, the lungs expand and contract to breathe, thanks to the passage of air. In the parakeets, thanks to the muscles of the chest, the rib cage itself expands and contracts, to force the air to enter and exit.

17) Plus, they poop every twenty minutes.

18) They hear frequencies between 400 and 20,000 Hz, and sequences of sounds can be remembered, and sometimes repeated.

19) Budgies have incredibly sharp eyesight: their brain can process over 150 images per second, while the human brain can only process 16!

20) Not all budgies are guaranteed to speak or sing, however, they are the most vocal species of all, and most budgies can say at least a few words! They also have a larger vocabulary and a clearer voice than other domestic birds.

21) There are two different species of parakeets, the Australian and the English ones, which are a bit wider. The former is more similar to the natural, original species, while the English ones are only bred to tame them.

22) English parakeets are about 4 inches wider than their Australian cousins and have wider heads and more feathers around the face.

23) For a long time it was thought that parakeets were a smaller species of parrot, but it is another species (that of budgies) that is the smaller version of parrots, although for many years they were not even recognized as parrots. However, the difference in size between a large budgie and a small parakeet is minimal!

24) Budgies are a type of parakeet, but since there are many types of parakeets, budgies are often not referred to as such.

25) Budgies can count up to 3, and they can make very basic sums with those three numbers! If you have three snacks in your hand in front of them, and you offer them two, they know they are being duped!