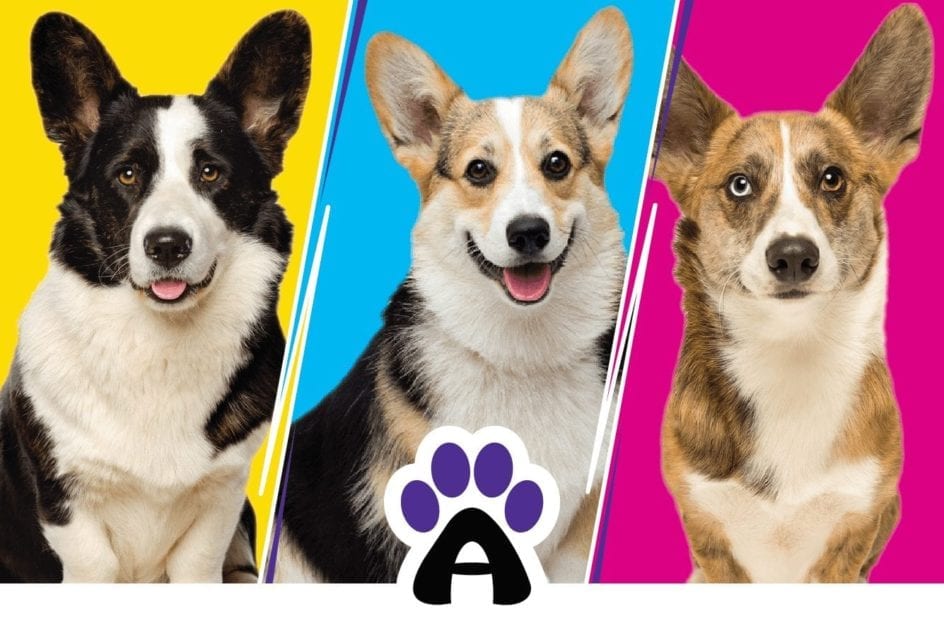 Once upon a time, the ancestors of the corgi breed helped English shepherds to look after the herds. Probably, the breed standard regarding color is connected with their pastoral past: a 2 or 3-colored dog stood out against the background of other animals.

The most common color of the corgi is red with white spots, but the coat can be of a different color.

The Difference Between Pembroke and Cardigan Corgi?

Both races are similar but different, so sometimes it is difficult to differentiate them without being a good connoisseur of the subject.

The Cardigan’s coat colors is older, has less mixing with other breeds, and spent longer as a herding dog. It is related to the Swedish Vallhund and the Pomeranian.

The Pembroke appeared later in England and has now been developed as a pet. It has genetic proximity to the Keeshond, Chow Chow, Samoyed, and Norwegian Elkhound.

One of the characteristics that distinguish them is the colors. The Pembroke is usually red, beige, and black, while the Cardigan has more variety of colors. She shares red and black but can be sable, brindle, and blue merle, as well as frequently wearing color points.

The tail is the other distinctive aspect. While in the Pembroke it is short and curly or non-existent, in the Cardigan it is long, stretched, and similar to that of the fox. In terms of size,  the Pembroke is smaller and lighter, less massive.

The Genetics behind Corgi Colors

The coat color of the Corgi breed depends, first of all, on the genetic characteristics of the pet.

Scientists have identified nine major alleles or loci that play a major role in what color a puppy will be born. Taking one allele from each parent, the animal acquires a certain color of the fur coat, often one of the genes dominates over all the others.

However, even in such cases, this locus fails to completely hide the recessive gene and new colors of the animal appear.

Varieties And Colors of The Corgi

The British breed is divided into two varieties:

The colors of the Welsh Corgi Pembroke differ from the standards allowed for cardigans.

Experts believe that the original color of the coat was black-brown. There is no monochromatic color. Most often there are red or tricolor dogs.

According to the tricolor standard, only Pembrokes are allowed. Cardigans come in two colors. A two-color puppy from three-color parents is not uncommon. The shade of the coat will change over time.

Below we will discuss each of them in more detail.

According to the standard, black should prevail in the tricolor. In this case, the dog’s coat will be charcoal and tan. If the black dog participates in exhibitions, the flaws in the exterior will be more noticeable. Therefore, in the external data of the pet you need to be 100% sure.

If the corgi is completely black, it must be discarded.

In black-backed corgi, brown shades prevail on the exterior. White spots are found on the chest, back, and legs. In a gray or red puppy, an even tone will go away over time, and a spotted black-and-back one will replace it. By this shade, you can clearly determine that the corgi is a relative of the shepherd dog.

It is a harmonious combination of red, black, and white spots, which are evenly distributed over the body of the dog, and it is difficult to distinguish the main color. Small white blotches are visible on the redhead.

By other standards, it is predominantly black on the back and sides, while the legs, chest and abdomen of the pet remain completely white with black, white, and red spots on the head. Darker spots are located near the ears.

Although the color of such corgi is dominated by red, their coat cannot be monochromatic. Small white marks on the muzzle and dark markings are a guarantee that the dog is not defective.

This very beautiful color is rare. The puppy is born gray, over time, the color of the coat changes. From about three months of age, the shade changes, starting from the head of the pet. A dog of this color has white paws, chest and stomach, on the head there are red markings.

Gray color remains on the back: the guard coat is lighter at the base, darkens towards the tip. The same coloring applies to the pet’s tail.

The Two-tone corgi looks more harmonious. Most often, such dogs have a combination of red and white shades, but brindle, marble, and black and white colors are allowed.

Black and white corgi have a black blanket, ears, tail, and most of the muzzle. White chest and paws, as well as markings on the muzzle. Color mixing such as black blotches on a white background and vice versa is not allowed.

The corgi’s body is covered with transverse stripes, and the mask on the muzzle is black. The background for the stripes is not charcoal black, but all tones of red and earth are allowed. Ideally, the background should be golden and the stripes should be light brown.

A distinctive feature of marbled dogs is blue eyes. The coat is predominantly white or gray in color, as well as a shade in between. If the Cardigan Corgi is marble, then the shade of the outer hair is uneven: the main part is light, and the tip is dark.

The corgi’s head is dominated by a red color with small white markings, black – on the back and sides. The paws are red, the belly, chest, pads on the paws are white. Black is rare, mostly on the back.

This very beautiful color is rare. The puppy is born gray, over time, the color of the coat changes. From about three months of age, the shade changes, starting from the head of the pet. A dog of this color has white paws, chest and stomach, on the head there are red markings.

Gray color remains on the back: the guard coat is lighter at the base, darkens towards the tip. The same coloring applies to the pet’s tail.

A perfectly white corgi must be discarded. The predominance of white in all variations of two-color and three-color colors is also unacceptable. A two-color black and white pet is considered a marriage if the specialist notices black hairs on a white coat, and white on a black one. The brindle color deserves special attention.

Pembroke with transverse stripes on the body is also marriage, while for cardigans this is the norm. The marble Pembroke is also not to be found among the representatives of the show- or breed-class. The tricolor welsh corgi cardigan does not fit the breed standards.

Here is a list of colors and markings available on the AKC Colors and Markings page. Choose “Cardigan Welsh Corgi” in the pull-down box.

Corgis don’t need frequent brushing, bathing, or haircutting. But if the dog walks a lot and is active on walks, then you will have to bathe it regularly. In addition, corgi molt several times a year. Particular attention should be paid to the thick and soft undercoat when bathing and brushing.

You need to accustom your puppy to hygiene procedures from 3-4 months of age.

How Much Does a Corgi Cost

The price would depend on many factors, such as the pup’s lineage, its parents, its health, and the breeder’s reputation.

Aside from the puppy’s price, it would be best to consider the expenses that would come with it. For instance, you may want to get the essential things for your puppies like grooming tools, food, and shelter.

Corgi Breeders Near You

If you’ve decided to adopt a Corgi puppy, and you’re in search of breeders near you? However, you will want to choose reputable Corgi breeders who socialize their dogs and perform a variety of health checks.!

Check out our list of the best Corgi breeders in America. This way, you can find all the breeders depending on the state where you live.

Here are some great and Best Reviewed Corgi Breeders list

What's The Most Popular Corgi Color?

The most popular color of dogs of this breed is golden red with white markings on the muzzle, belly, and paws.

Often misidentified as red and white, the rarest colored corgi is the sable. A sable corgi generally has a darker color around its head, neck, chest, and legs compared to the white color that is dominant in most.

Do Corgis Shed A Lot?

Corgis shed a lot because they have a double coat– two layers of hair: The top layer of hair consists of guard hairs that repel moisture and dirt.

If the dog does not fall under the standard of the Welsh Corgi breed, do not be upset. Both the Cardigan and the Pembroke are wonderful companion, loyal and loving family member who gets along well with other animals in the house and will always be happy to play with the kids.

Kind and empathetic corgi patiently endure children’s whims. If according to one of the parameters the dog cannot be classified as show or suitable for mating, the pet will become a representative of the pet class, since the color does not affect the character traits.