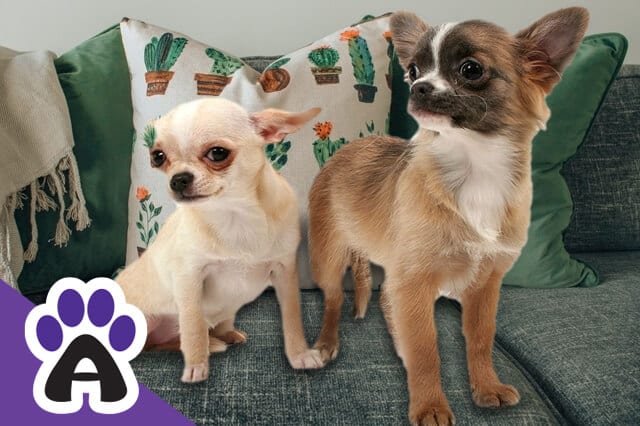 The Chihuahua is considered to be the smallest dog breed on the planet. However, even this dog is subject to certain anomalies. It happens that such dogs can give birth to tiny puppies. They are called “mini” or miniature.

Keep Reading along to discover how do dwarf chihuahuas differ from their counterparts?

History of The Breed

Experts believe that the ancestors of Chihuahuas are small dogs that lived with Indians in Central and Latin America. Their images are found in wall painting, as well as sculpture. The fragments found to belong to the culture of the Aztecs and Maya.

In addition, archaeologists find skeletons of dogs similar to modern mini Chihuahuas in the burials of leaders and nobility. It is assumed that these animals were held in special respect.

In the homeland of dogs, in Mexico, the indigenous people called them “techichi”. Europeans saw interesting animals in the Chihuahua area, which gave a more common name for the entire subspecies. Initially, the dogs were long-haired. However, after crossing with the Chinese Crested, smooth-haired individuals appeared.

Several interesting facts are associated with the charming mini Chihuahua:

Despite its ancient history, the breed was recognized only at the beginning of the 20th century. However, these little creatures quickly won universal love.

The difference from the standard is established by general indicators. However, more attention is paid to the size of the small but adult individual.

Interesting. Chihuahua mini is not recognized by the canine community as a separate species. However, the trend towards increasing popularity of such individuals suggests that this may be contested.

There are two subtypes of these miniature dogs: smooth-haired and long-haired.

The first is more common. They have a soft and smooth cover with a glossy sheen. Some lengthening of the hair can be observed in the area of ​​the face, neck, abdomen, and tail. There is usually no undercoat. But if there are still some signs, the undercoat is a dense short down. Individuals with coarse hair are not allowed for breeding.

Long-haired chihuahua also has a soft, glossy coat. It can be either straight or with small waves.

The fluffiest areas in the mini breed are:

The color of small chihuahuas is varied:

The latter, however, is quite rare. Breeding dogs with the blue tinge gene is problematic as it has a connection with breed diseases.

The Character of Dwarf Chihuahuas

Breeders often say that the character of these small dogs has something of a terrier. They are also brave, considerate, and a little cocky. However, opposite traits can awaken in an animal. This happens if you leave it alone for a long time. Fear of separation from a loved one aggravates mental problems. Therefore,  this dog is not for people who are not at home for a long time.

Another character trait of little chihuahuas: they are quite jealous. Moreover, both to people and to animals.

Dwarf Chihuahuas are not for small children. First, a child can easily injure a fragile dog. Secondly, despite their size, mini dogs have a serious disposition. They can easily bite the offender. Therefore, it is better to keep this dog in a family where children have already grown up and know the rules for communicating with animals.

But these dogs are suitable for older people. They are able to lie or sit for a long time next to their beloved owner, brightening up loneliness.

The seriousness of the little creature extends to communication with relatives. Chihuahuas are capable of engaging in battle with a much larger enemy. The outcome of such a fight is obvious. Therefore, the owners should monitor their mini pet and start training it in time.

Interesting. Dwarf Chihuahuas are distinguished as friends of other Chihuahuas. They are usually either indifferent or suspicious of representatives of other breeds.

Choosing a dwarf Chihuahua puppy is not easy even for a professional. In a multiple litter, all babies are quite tiny. Therefore, the difference is not obvious even to the experienced eye. Up to 2 months, puppies develop evenly. But after the 3rd, there is a sharp jump. Therefore, if a three-month-old puppy is inferior in size to its brothers and sisters, this is a signal that the individual belongs to the “mini” species.

There is another trick in finding a mini Chihuahua. Dwarfism is transmitted genetically. Therefore, it is worth looking for a couple who have already born abnormally tiny puppies.

If you want to have such a pet, you should immediately prepare for the high cost. For the smallest Chihuahua puppies, the price is higher than for ordinary ones (1000$). In addition, the cost depends on a beautiful face or active temperament.

More attention should be paid to the health of mini dogs. It is worth asking about the tests, looking at the veterinary passport, to clarify what problems the puppy’s parents had.

And we must not forget about the above-described feature of puppies with a bluish coat. They have a high percentage of genetic failures. Usually, breeders reject them altogether. Therefore, if the kennel is trying to persuade you to buy just such a puppy, you should seriously think about the seller’s conscientiousness.

If the decision to buy a small Chihuahua is made, you need to find a veterinarian who understands dwarf breeds in advance. The specialist must clearly know what drugs and in what dosages the Chihuahua mini is shown.

A separate issue is the purchase of a female puppy. Due to their small size, females are not able to give birth on their own. And the period of pregnancy is fraught with death for both the mother and the offspring.

Dwarf Chihuahuas often have a large head with a wide fontanel. This could be a sign of hydrocephalus. And it is impossible to make a diagnosis immediately. But a puppy with this pathology sleeps a lot, develops more slowly, and often suffers from headaches.

Only an experienced veterinarian will be able to identify the deviation when the puppy is 3-5 months old.

Caring For A Mini Chihuahua

Taking care of a miniature dog is not easy due to its size. Of course, it does not take up much space and eats little. However, the fragility of the skeleton dictates its own rules.

The pet must be carefully monitored while it plays. In addition, special nutrition should be provided.

The diet of little chihuahuas

Feeding a dwarf Chihuahua with dry food or natural products is a matter of the owner’s convenience. In the first case, it is worth choosing food for small breeds. In the second – to create a special menu.

It must necessarily contain:

Dwarf Chihuahuas should not be given:

You need to deal with any dog, regardless of its size. In the case of small chihuahuas, this has a number of serious reasons:

It is necessary to deal with dwarf Chihuahuas since puppyhood. A basic course in obedience is required.

For Chihuahua mini socialization is required. The dog must learn about the world around it. Leaving it at home alone all the time will cause mental problems.

It is noteworthy that in size Chihuahuas mini are similar to cats. It is enough to simply train them to cope with their needs in the tray.

The pet must have:

Little Chihuahuas should be vaccinated regularly. The first vaccinations are made by the breeder, which is displayed in the veterinary passport. Also, we must not forget to treat the animal on time from fleas, worms, and ticks.

Dwarf Chihuahuas are not the healthiest dogs. The smaller the size, the more health problems. They are prone to hydrocephalus and hypoglycemia. In the latter case, the dog often faints. If this happens, the animal must be urgently shown to the veterinarian. Glucose injections help relieve the attack.

And the owner should remember that the pet:

Chihuahuas are prone to obesity, and excess weight can provoke diseases of the bone apparatus. Tartar is also a common problem.

Typically, representatives of this breed are measured for a solid period: up to 15 years. The same should be expected (with proper care) from a dwarf individual if it weighs 3–5 pounds.

With dogs up to 2.5 pounds, everything is more complicated. They usually have many health problems. These mini Chihuahuas live about 5-7 years.

Pros And Cons Of The Breed

Chihuahua minis are wonderful dogs. However, it is worthwhile to prepare in advance for the fact that their content requires some effort.

This breed has a predisposition to certain diseases. Therefore, it is extremely important to choose a puppy without birth defects.

Chihuahuas minis are not suitable for busy people. This is a companion dog, which, moreover, often chooses only one family member as a favorite owner.