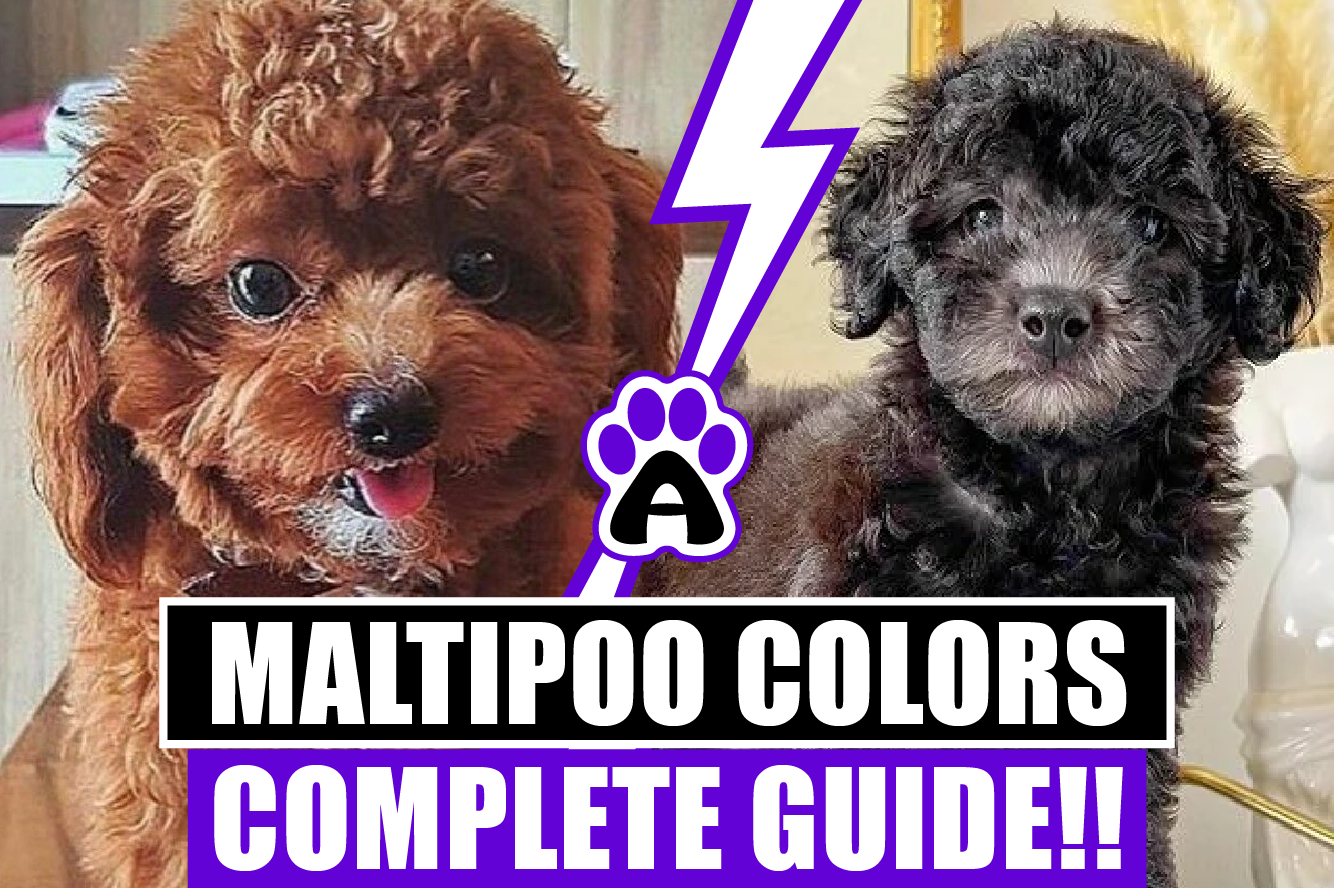 There aren’t different types of Maltipoos per se, but there are different colors of Maltipoos, and for their owners, a color also serves as a type. Before we proceed, you should be familiar with some color terms.

In dog breeder or dog enthusiast parlance, a changing of the coat is called “fading” or “clearing,” while the retention of a particular color throughout a dog’s life is called “holding.”

Although rare, this breed does exist. A black Maltipoo will have the soft and silky hair of a Maltese but the dark hair color of a poodle. The poodle parent will always influence the color because the Maltese is a solid-colored dog that only comes in white or cream.

For a black Maltipoo to be considered one, it has to remain black throughout its life and not just have black hair like a puppy coat that fades to another color as it ages.

The eyes and nose also have to be black as well. You may be able to find Maltipoos with a solid black coat yet brown eyes. As is often the case, these dogs have a coat that will fade over time. There are also Maltipoos called parti-blacks.

These are dogs with predominantly black colors, meaning their coat is 50% black, and the other colors like blue or silver have a smaller percentage.
It should be mentioned that a true black Maltipoo can also develop a red tint in its coat if it is exposed to too much sunlight.

Like in other species of dogs that fall into the blue category, this shade of blue is more like a diluted shade of black.

Some are born this way, but many blue Maltipoos are also born black but fade to blue as they age. Note that it is easy to mistake a blue Maltipoo for a black one, and vice-versa.

These Maltipoos were either born this way from birth or had their coats fade from a rich, black color as they aged.

Dogs in this category will have a color almost like a chocolate bar. Like the black Maltipoo, a true brown Maltipoo should also have all-brown eyes and nose.

It is the same with the black Maltipoo; the poodle parent influences the color.

Unlike true black Maltipoos, some brown Maltipoos may change their coat color over time, fading to a lighter color, usually beige, even without constant exposure to sunlight. This change happens because of the dog’s poodle genes.

Maltipoo breeders consider this color the most difficult to produce. However, it should be mentioned that, unlike a black or brown Maltipoo, a red Maltipoo isn’t a solid red throughout; it will be more of an apricot color with shades of a deeper color that looks like red.

Like brown Maltipoos, some red Maltipoos will have a change of color in their coat as they grow up. So, the red areas on a red Maltipoo may fade to apricot to match the rest of the coat as the dog grows up.

Maltipoos under his category are either born this way or had the red spots on their coats fade as they age.

White Maltipoos are usually the result when a Maltipoo is the offspring of a white Maltese and a pure white poodle. As mentioned, pure-bred Maltese only come in white or cream; thus, many ride on the poodle.

Breeders say the poodle has to be all-white at least five generations back before it can be bred with a white Maltese to produce white Maltipoo puppies.

It is easy to mistake a cream Maltipoo for a white one. According to dog breeders, any Maltipoo that is off-white is considered cream.

Cream Maltipoos may also have darker colors like apricot, gray, or tan in some regions of the body, particularly around the ears.

These Maltipoos will have the same shade as that famous coffee drink. The coat of this Maltipoo is described as a light and shiny tan.

It will also have a liver-colored nose and dark almond eyes.

As in most cases, these Maltipoos are born black but will fade to shiny silver as they grow older.

These Maltipoos seem to grow up beige but later develop silver hairs around the face and paws as they age.

The Bronze color is at the bottom of the list because, technically, this isn’t considered an “official color” yet when it comes to Maltipoos, but that is slowly changing with more and more bronze Maltipoos coming out.

Maltipoos with a lighter and shinier coat than the standard brown are considered bronze.

It should also be mentioned that the coat of a Maltipoo can hinge on the changing of the season. For example, some Maltipoos can have a black coat during spring and summer and a gray coat during fall and winter, then back again when the season turns.

They can have a particular color as they are born but change color at eight weeks old and then again as they reach adulthood.

Whatever the color of a Maltipoo, it will behave the same. So why do some Maltipoo owners and breeders fuss about their color?

The reason for this is that a Maltipoo that stays true to its holding color from birth to adulthood is considered a success in breeding.

That makes them more profitable to breeders and endears them more to their owners, even though they aren’t any different from “lesser” Maltipoos.

Aside from color, a Maltipoo can also have three different kinds of coats. By nature, Maltese have long, straight, silky coats, while poodles have curly coats that tend to cord if left to grow naturally.

Of course, this goes without saying the kind of coat a Maltipoo has will indicate if the poodle parent or the Maltese parent has the dominant gene.

This means the Maltese genes are dominant. Maltipoos with straight and silky coats also tend to have a lighter color.

This means the poodle genes are dominant. This coat is usually denser than the straight and silky coat.

A Maltipoo with this coat almost doesn’t feel or look like a Maltipoo at all.

Each coat has advantages and disadvantages. A long and silky coat means a Maltipoo owner can have more options when it comes to grooming the dog; it can be left long, cut short, or trimmed to something in between.

However, it can also be costly to maintain. Thick and curly hair means the dog is better insulated, and this can be a good idea when the owner and his dog live in areas where the temperature can drop.

While it is less costly to maintain than a silky coat, the owner must frequently deal with tangling and matting.

Dog breeders say the wiry and wavy coat may indicate poor breeding and warn dog buyers to stay away from Maltipoos with this kind of coat.

While this should not stop owners if they want a Maltipoo with wiry and wavy hair, they should be aware that their coat easily tangles and can be high maintenance.