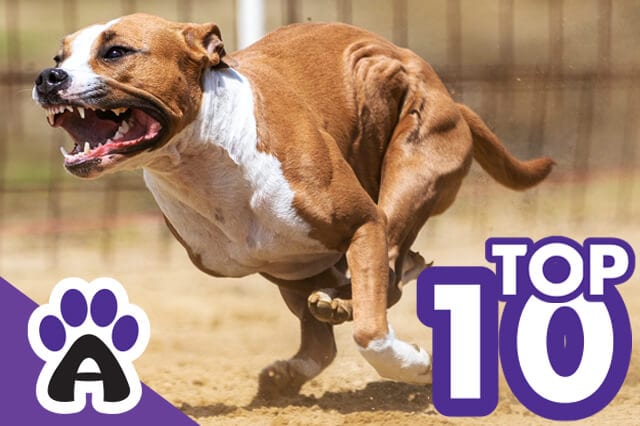 The average speed of a running dog is 6-10 Miles / h. But there are breeds that can move several times faster. Most of them were bred to chase and catch prey and still serve as irreplaceable assistants in hunting.

Let’s find out which breeds are in the top 10 fastest in the world.

What Determines The Speed Of The Dog?

How fast a dog moves depends on the breed. Each of them has its own anatomical features that have a direct impact on speed.

Fast running dogs are characterized by:

The Fastest Dog Breeds In The World

Representatives of hunting, herding, and horse-drawn breeds are ranked as good runners. All of them must move at high speed in order to catch an animal, manage numerous flocks of sheep or deliver goods.

The fast dog, better known as the Greyhound, was bred to chase prey at short distances. It’s capable of developing impressive speed, for which it’s often called a cheetah in dog form.

The English greyhound has a spectacular, aristocratic appearance and high intelligence.

The main distinguishing features of this fast dog are a narrowed head, a thin neck, a lightweight skeleton, and a stretched lean body.

The graceful, long-legged greyhound is relatively light and tall. Running at high speed allows it to easily catch up with hares and win competitions.

Interesting! Greyhound is recognized as the fastest dog in the world. In 1994, a dog named Star Title set an absolute world record, accelerating to 38 Miles / h.

This ancient breed is considered a relative of the Saluki. It was bred in Afghanistan and is used to hunt antelope, snow leopard, wolves, and rams.

The graceful and fast dog grows up to 28 inches at the withers and weighs up to 70 pounds. In structure, it is similar to other greyhounds, but unlike them, it has a long silky coat.

Elegant and fast dogs are considered the real pride of Russian cynology. Russian greyhounds are excellent runners, capable of speeds in excess of 31 Miles / h. They were bred to hunt wild boars, bears, and wolves.

Hardy and fast dogs have a stubborn character and can chase prey for several hours. Beautiful, harmoniously folded dogs grow up to 33 inches at the withers with a weight of 62-120 pounds.

Slender Russian greyhounds in build resemble the Saluki breed but have a long wavy coat. Thanks to this cover, they easily endure severe winters.

These hardy and fast dogs have been known since ancient Egypt. Saluki have long been used to hunt hares, foxes, and gazelles. They are capable of speeds up to 37-40 Miles / h and can run for a long time without slowing down.

Graceful, lean Saluki grow up to 27 inches at the withers and weigh no more than 62 pounds. Despite the outward slenderness, agile and fast dogs with a graceful body and a long muzzle have good health and considerable physical strength.

In its historical homeland, the breed, included in the list of the fastest dogs, is valued not only for its hunting qualities, but also for its beautiful exterior.

Lean dogs with developed muscles grow up to 20-24 inches and weigh in the range of 45-75 pounds.

The lean body of the Vizsla is covered with smooth brown or copper hair. The maximum speed that the Hungarian cop is capable of is 39 Miles / h.

The history of small, energetic dogs began in 1795 in Great Britain when local hunters needed a completely white dog that could not be confused with a fox.

Strong, hardy, and temperamental Jack Russell Terrier does not differ in large size. It grows up to 11-15 inches at the withers and weighs no more than 20 pounds.

Despite its diminutive size and short legs, a born hunter is able to move at a speed of 34-37 Miles / h and is considered one of the fastest dogs.

Initially, these fast dogs were used as hunting dogs. But then, due to their small size, they were retrained as rat-catchers. In the process, it turned out that the Whippets are capable of developing considerable speed, and they were introduced to dog racing.

Dogs, accelerating up to 34-39 Miles / h, are recognized as the fastest of all small-sized breeds. In these small, short-haired animals, the similarities with the Greyhounds are almost identical.

The popular spotted dogs have long been used as guards and companions. Often the Dalmatians had to run after the master’s carriages and protect them from predatory attacks. Therefore, it is not surprising that they are ranked among the fastest breeds and are capable of moving at a speed of 37 Miles / h.

These fast dogs are the smallest of the greyhound group. They weigh no more than 13 pounds and are distinguished by a fragile physique. True, the tiny size does not prevent Italian greyhounds from reaching speeds of up to 31 pounds / h.

Light, agile, and fast Italian greyhounds easily catch up with hares and squirrels.

These ancient and very fast dogs were bred to hunt deer. Deerhounds grow up to 27-31 cm at the withers and weigh between 82-150 pounds. Outwardly, the representatives of the breed resemble a greyhound covered with hard hair.

Developed muscles and long slender legs allow deerhounds to move at a speed of 27 Miles / h.

Not surprisingly, the list of the fastest dogs consists of predominantly hunting breeds. After all, in order to overtake prey, the dog has to develop a high speed and maintain it for a sufficiently long time.

12+ Recognized Colors of Corgis (2022) | What is the most common Corgi color?
5 Types Of Pit Bull Dogs | Impostor vs The Real
8 Thing You Need To Know About The American Bully Pocket
Brown Chihuahuas : Complete Guide
The Most Big White Fluffy dogs | Color Features, Popular Breeds (with pictures)