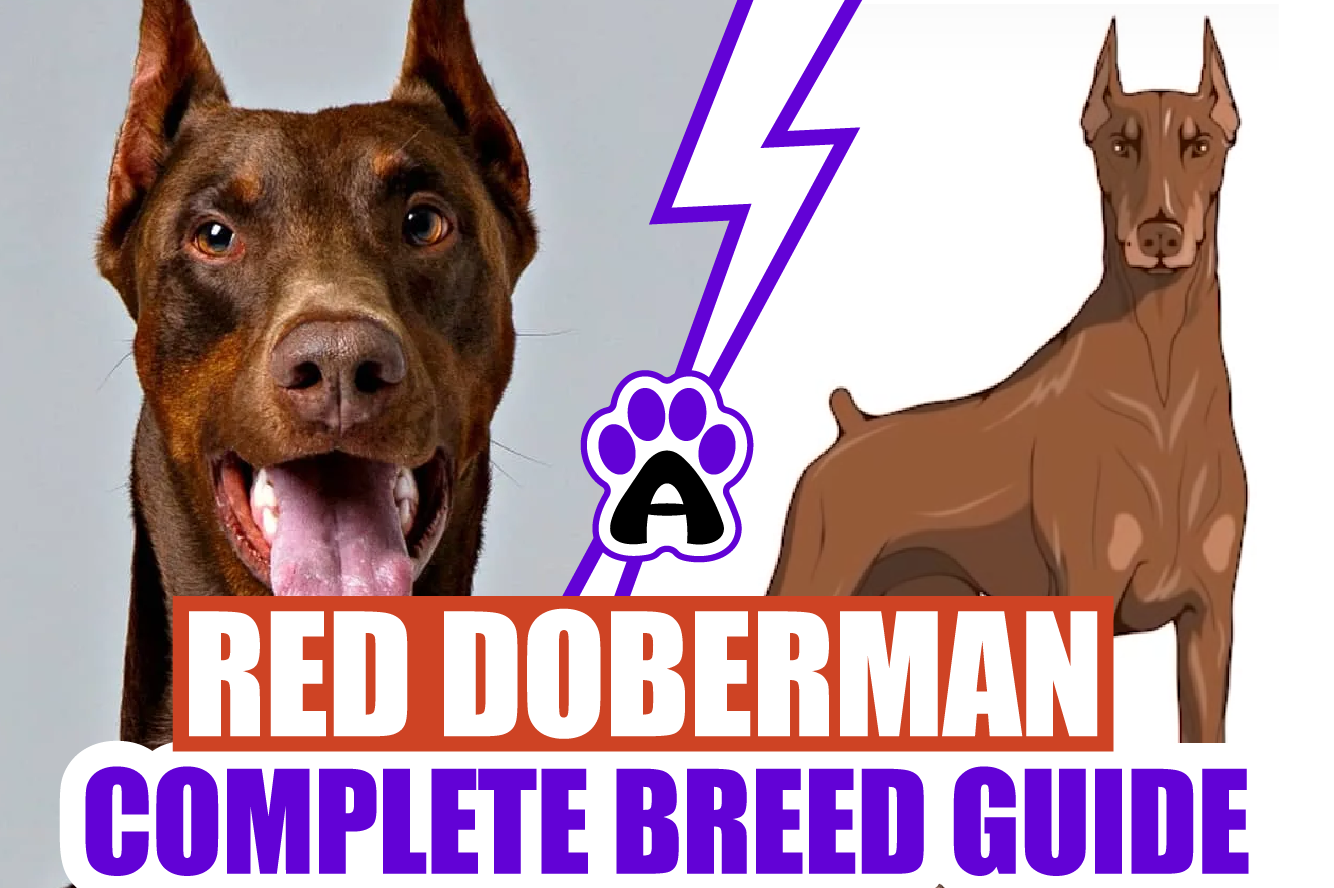 If you’re considering a Doberman as a pet, here are a few things you should know. they make excellent guard dogs and loyal protectors. they can be willful and stubborn at times, but are also intelligent and respond well to training.

with proper socialization, they can get along well with other pets and children. however, their high energy level means they need plenty of exercise.

Red Dobermans are especially striking, and their coat is one of the most distinctive features of the breed.

while all Dobermans have short, smooth coats, the red variety has a lustrous sheen that really makes them stand out. they also tend to have less body fat than other colors, which can make them appear leaner and more muscular.

While red Dobermans are not considered to be rare, they are less common than other colors of Dobermans.

This is because the gene that causes the red color is a recessive gene, so it is less likely to be passed down from parents to offspring. However, if two red Dobermans are bred together, there is a higher chance that their offspring will be red.

Yes, red Dobermans are considered to be purebred. This means that they conform to the breed standard for Dobermans set by the American Kennel Club (AKC).

According to AKC standards, this breed can have four colors: black and rust, blue and rust, fawn (Isabella) and rust, and red and rust. Other kennel clubs, such as the United Kennel Club (UKC), do recognize red as an official color.

Red Dobermans are, as the name suggests, red in color. They may have a few white markings on their chest and toes, but they are primarily red.

Red Dobermans are just as large and muscular as other colors of Dobermans, and they have the same long snouts and erect ears. They are powerful, athletic dogs that are built for speed and agility.

Despite their striking appearance, red Dobermans are actually quite rare. In fact, they make up less than 5% of the total population of Dobermans. This is due to a number of factors.

First, red is not one of the traditional colors for Dobermans. Second, many breeders believe that the red color is a result of inbreeding and therefore they try to avoid it.

The most common shade is called fawn. Fawn Dobermans can range in color from a light tan to a deep reddish-brown. Other shades of red include rust and mahogany.

Red Dobermans are often mistaken for brown Dobermans. The two colors can be very similar, but there are some key differences.

Despite their rarity, red Dobermans are just as intelligent and loyal as their more common counterparts. They make great pets and are excellent protectors. If you’re lucky enough to own a red Doberman, cherish them!

What Are the Disadvantages of Red Dobermans?

There are a few disadvantages that come along with owning a red Doberman. One is that they are not as common as other colors, so they may be more difficult to find.

Another is that they may be slightly more expensive than other colors, simply because they are less common.

Finally, some people believe that red Dobermans are not as intelligent as other colors. This is a myth and has no basis in fact. While red Dobermans may have a few disadvantages, they are still beautiful, loving dogs that make great pets.

The temperament of a red Doberman is largely determined by its training and socialization. Red Dobermans that are well-trained and socialized are typically friendly, loyal, and protective. They make great pets and are excellent protectors.

The lifespan of a red Doberman is typically 10-12 years. However, some individual dogs may live longer or shorter depending on their overall health and genetics.

Like all dog breeds, red Dobermans are prone to certain health issues. Some of the most common health problems seen in red Dobermans include hip and elbow dysplasia, heart disease, and cancer.

Red Dobermans are also susceptible to heat stroke because of their short coats. It is important to keep them cool in hot weather and make sure they have plenty of water to drink.

Overall, red Dobermans are healthy dogs with a lifespan that is average for their size.

How Much Does a Red Doberman Cost?

A red Doberman will typically cost between $500 and $2,000. This price range can vary depending on the breeder, the dog’s bloodline, and whether or not the dog has any special markings or features.

For example, a red Doberman with white chest and paw markings may be more expensive than one without these markings. Ultimately, the price of a red Doberman depends on the individual dog and its unique features.

If you’re looking for a red Doberman puppy, there are a few things you should know. For starters, red Dobermans are not as common as black and tan Dobermans, so they may be slightly more expensive.

You will want to choose reputable Doberman breeders who socialize their dogs and perform a variety of health checks.!

Look no further,  To help you find the best Breeders located near you. I’ve put my own list of important factors based on experience, reputation, quality, and client reviews.

What Is the Rarest Doberman Color?

What Eyes Color Do Red Dobermans Have?

Red Dobermans typically have brown eyes. However, there is a condition known as “albinism” which can cause red Dobermans to have blue eyes. Albino Dobermans are very rare and they are also susceptible to health problems.

Final Thoughts: is the red Doberman the right dog for you?

If you are looking for a loyal, loving, and protective companion, the red Doberman may be the right dog for you. They are intelligent and trainable but may require more patience and training than other colors of Dobermans.

They are also susceptible to health problems so it is important to do your research before getting a red.

Great Dane | Types of Colors And Hair Care Features
The Black Shih Tzu | Are black Shih Tzus rare? (With Pictures)
The Blue Fawn Pitbull: Everything you need to know
7 Things You Need To Know About The Long Haired Dalmatian
The Top 10 Smallest Dogs In The World (With Pictures)