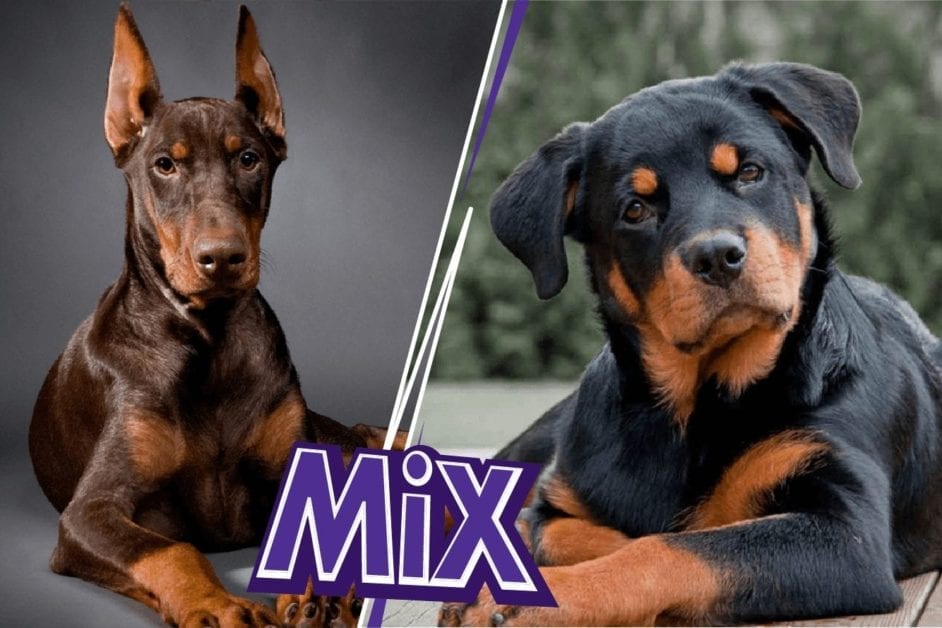 Dobermanns and Rottweilers –  are both German dog breeds that are perfect candidates for being greate watchdogs. Together they share their short black fur with red-brown markings, whereby the Doberman also has brown fur with rust-red blotch.

No matter which genes ultimately dominate – this mix is ​​looking for active people who can help them discover the world.

In order to fully understand the Rottweiler Doberman Mix puppy, it is important to know more about Its parents and their personality traits.

Dogs of the Rottweiler breed have a large, muscular physique, the chest is wide and deep. Paws are of medium length, strong, and also muscular, the neck is medium, massive, the head is large, with a powerful mouth, the ears hang down on the sides of the head on the cheekbones. The tail is usually docked, black and tan.

The Rottweiler can be both a ferocious and ruthless adversary, as well as a best friend, or, for example, a nanny for a small child. It all depends on the specific situation and environment, as well as, of course, on the people with whom it interacts. This breed is distinguished by a developed intellect, although many people underestimate this quality in them, developing exclusively guarding and fighting skills.

The Doberman dog breed has an athletic, muscular physique, lean but aesthetic. The legs are long, muscular, and the tail is usually docked. The neck is long, the head is narrow, elongated, the ears are also cropped – this is done in order to improve the dog’s hearing because if the ears are not cropped, they hang down on the sides of the head, which negatively affects the hearing qualities.

They are strongly attached to loved ones and often, by default, see themselves in the role of the main protector of each of the family members. Moreover, even without special training. Dobermans are good students, they are obedient and usually not stubborn. Many underestimate the intelligence of these animals, but in vain – this is a really smart dog, especially if the owner understands this and contributes to the development of the intelligence of their pet.

Can the appearance of the offspring in a mixed breed dog be accurately estimated? That is difficult because even within a litter the siblings are often a colorful group. Nevertheless, it is important to know which external characteristics a Rotterman has and which may be passed on to its proteges.

The Rotterman will adopt the features from both parents, in general, these dogs are similar, especially as puppies.  When the Rotterman matures it will turn into a surprisingly stately dog, with strong legs, more stocky than a purebred representative of the breed.

This mixed breed will have a classic color from both breeds – black with rusty tan. The head will be medium in size, with a well-defined occipital protuberance, the ears are set wide. The muzzle is slightly narrowed, ending in a wide lobe with wide, round nostrils. The color of the lobes, lips, and eye rims is black.

In terms of essential characteristics, the Rottweiler Doberman mix can inherit some interesting traits from both parents. These include:

A Rotterman is a sturdy and resilient dog. However, they are at increased risk of suffering from certain diseases during their lifetime. Unfortunately, Parents can pass their medical history on to their offspring. Possible diseases include:

How Do I Raise a Rotterman Mix?

Some mixed breed dogs come from the animal shelter and are only given to dog owners who are experienced in their breed. If necessary, the adoption is linked to certain templates.

It should be noted that Rottweiler Doberman mixed dogs are strong dogs that can also develop a distrust for strangers. The following tips are helpful in raising Rotterman Puppies:

Future adopters can  look forward to joint activities such as bikejoring, jogging, or swimming. It is important that the Rotterman and young dogs refrain from dog sports that could damage their joints.

A Rotterman is ​​likely to inherit a keen sense of smell. Therefore, sniffing games in the garden through to demanding mantrailing are ideal to use its outstanding nose.

Since this type of mongrel is a medium to large-sized dog, a house with a yard is beneficial. But living in an apartment is also possible under certain conditions.

If its family spends several hours outdoors with it every day, a Rottweiler Doberman mix will be completely relaxed and satisfied. Time with its family will always be more important to a Rotterman than a garden.

Rottermans do not live long at home. Usually, this period is no more than 7-8 years. But if they are provided with a high-quality lifestyle, then they can live for 10-12 years.

The lifespan of Rotterman is independent of gender. External factors influence the pet’s condition much more. Often this breed is taken for protection. But Rottweilers cannot be kept on a chain or in a cramped enclosure. This can lead to weight gain and muscle wasting.

Important! According to statistics, the lifespan of Rotterman in sunny regions is 5-7 years.

The Rotterman is not the healthiest of dogs. But the life expectancy of these dogs is influenced not only by poor heredity and acquired diseases. Owners often shorten this period by improper care of the dog. Therefore, it is so important to know the peculiarities of keeping a Rotterman, as well as the predisposition of the breed to a number of diseases.

Nutrition seriously affects the health of the dog. The Rotteerman can be fed both dry food and natural food. In the first case, the owner does not have to spend time developing a diet and preparing it. But it should be borne in mind that representatives of this breed eat a lot, and high-quality food is not cheap.

When feeding naturally, it is important to give the Rotterman protein. Their content in one serving should be at least half of the total weight. The basis of the dog’s diet can be:

The rest of the diet of Rottermans is made up of vegetables and cereals (20 and 30%, respectively). In addition, vitamins and mineral complexes should be given, but only after prior consultation with a veterinarian.

Proper training of the Rottweiler and proper education of the dog are prerequisites for keeping representatives of this breed.

Unfortunately, the Rotterman dog has a number of genetic diseases. And it is beyond the power of man to change this. However, proper nutrition, proper care, and regular check-ups by your veterinarian can significantly increase your pet’s lifespan