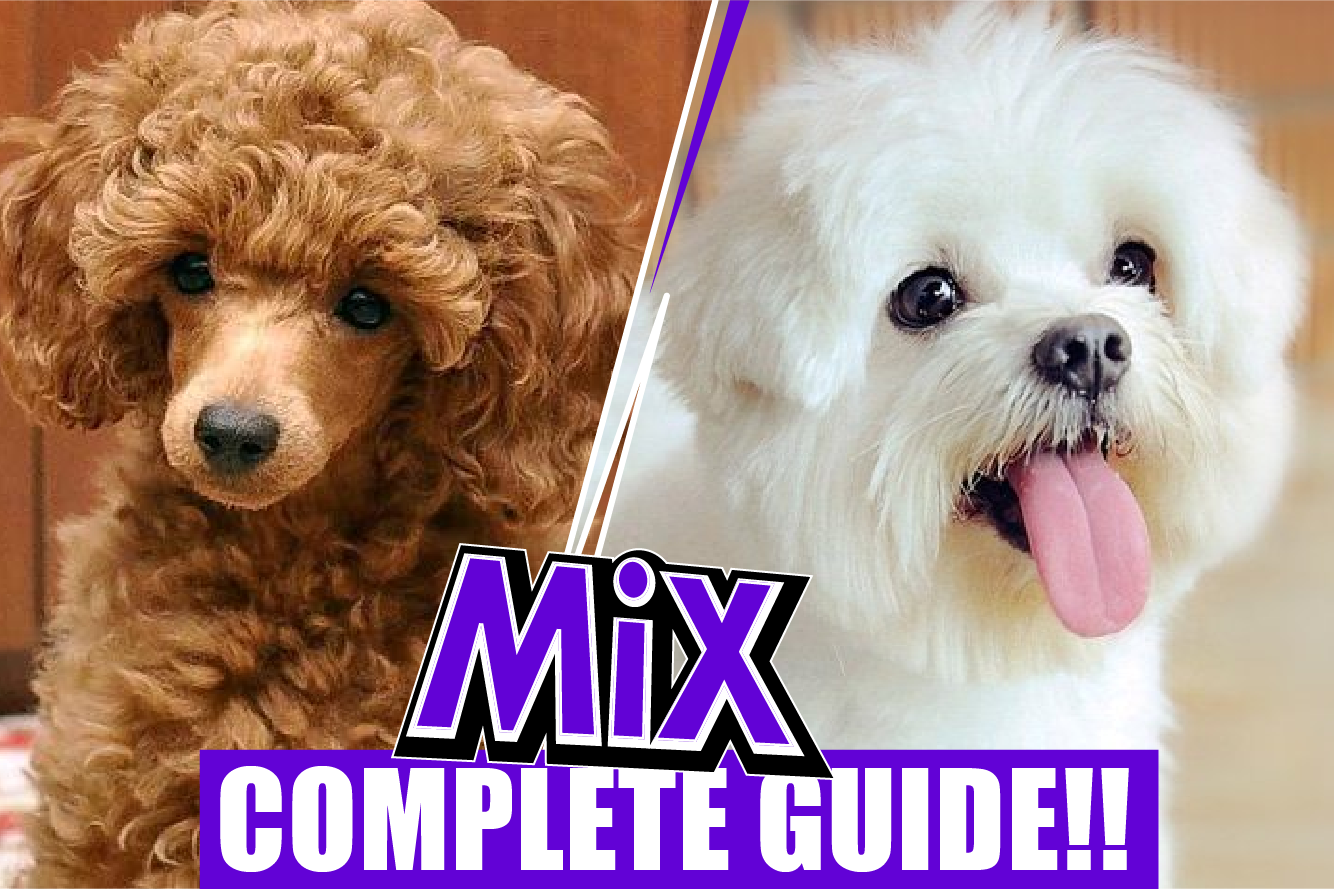 What is a Maltipoo?

Cute, cuddly, and popular as they are, the Maltipoo is not considered a breed. Bodies like the AKC recognize the Poodle and the Maltese as a breed.

However, they do not acknowledge the offspring of such a pairing. For this reason, the Maltipoo is called in kennel parlance as a crossbreed.

However, this has not discouraged Maltipoo owners from all over the United States, the United Kingdom, and other parts of the world from loving and adoring their pets, or by organizing themselves into clubs that specialize in this crossbreed, whether it is to buy, sell, or rescue.

It has also not stopped dog breeders from further experimenting with combining Maltipoo genes with that of other dog species to come up with even more crossbreeds.

Before we delve into the history of the Maltipoo, you should know that while the majority of dog owners call them Maltipoos, they are also called different names by different owners and even various dog clubs.

The North American Maltipoo/Maltepoo Club and Registry uses both spellings. These dogs have also even been called Multipoos and even Moodles. However, please do not be confused; they are all the same. To eliminate confusion, we shall be referring to the dogs as “Maltipoo” in this guide.

The truth is it can no longer be traced who first decided to cross a poodle with a Maltese. There are many documents and records about both the poodle and the Maltese, but not their resulting crossbreed.

What can be confirmed is that these two species were first bred in the United States around 1990 after dog breeders wanted to produce a species that was small and did not shed so excessively.

However, this idea quickly caught on, and before long dog breeders were breeding Maltipoos. If anyone claims to be the first to have thought of this wonderful idea, then that claim should be taken with a grain of salt.

With that said, there is also no single breeder who can claim to be the sole source of Maltipoos. So if someone tells you that you cannot get “original” Maltipoos other than from him or her, you should know this isn’t true.

There aren’t different types of Maltipoos per se, but there are different colors of Maltipoos. And for their owners, a color also serves as a type. Before we proceed, you should be familiar with some color terms.

In dog breeder or dog enthusiast parlance, a changing of the coat is called “fading” or “clearing,” while the retention of a particular color throughout a dog’s life is called “holding.”

Some dog breeders may have claimed to have crossbred the Maltipoo with another breed. This should be taken with a healthy dose of skepticism. You might hear about the following crossbreeds but always beware if they try to sell you any of them.

Who isn’t familiar with the Chihuahua? Like the Maltese, the Chihuahua also goes way back in human history. Originating from Mexico, the Chihuahua was believed to have descended from the Techichi, a type of dog preferred by the Toltec civilization.

The resulting offspring of a Maltipoo Chihuahua mix isn’t well established in the marketplace at the moment, and this mix may need more time to develop before its traits can be formalized.

The Yorkshire terrier, or Yorkie for short, is another small dog that is excellent for breeding with a Maltipoo. As per the standards of the AKC, Yorkies should stand no taller than 8 inches (20.32cm) and weigh no more than 7 lbs. (3.17kg).

They have a very long coat that reaches to the ground, even when measured from their head or back. Like the Maltese, these small dogs rooted out rodents and rats, but they didn’t do this in the sun-drenched Mediterranean; they did it in the mills of Yorkshire in northern England.

Eventually, they would also become the favorite of Victorian ladies because of their appearance. Yorkies are described as affectionate, feisty, tenacious, and brave despite their size.

There is also no such thing as a healthy “Teacup Maltipoo.” If someone offers you a teacup Maltipoo, it will most likely be a poorly bred puppy of dubious lineage.

While it is true some Maltipoos may fit the size of a teacup in their early weeks, they will grow in size eventually. Spare yourself the heartbreak, and don’t encourage these practices, which only harm the dogs involved.

So, you have made up your mind to get a Maltipoo? Where do you get one? The good news is that there are many breeders who can provide you with one. The bad news? Some of these “breeders” may not be reliable or trustworthy.

This is why it’s essential to make sure you only get from a genuine breeder who knows what he or she is doing.

How Much Does a Maltipoo Cost

Speaking of which, how much can you expect to spend on a Maltipoo? Expect one to cost between $500 to $2,000. A puppy from a breeder with an established reputation can also fetch from $700 to $800.

If you are offered a Maltipoo that is way below this price range, you should be wary; it may be a poorly-bred animal or a dog of dubious pedigree.

The first thing you have to remember is that your Maltipoo will need different amounts of food at various stages of its life. Before you implement any feeding regimen, it will still be best to consult your veterinarian.

The puppy might be more similar to either the Poodle ancestry or the Maltese ancestry, and the veterinarian might be able to identify some issues that come with this.

However, the rule of thumb when it comes to feeding Maltipoos is that a Maltipoo puppy will require more food as it grows from being a puppy into an adult. And, adults will require less food than a growing puppy.

Caring For Your Maltipoo

Your Maltipoo will have needs that go beyond just food, water, and shelter. As a companion animal, it will also need a lot of love and affection from you. The good news is there are many ways you can ensure this.

Caring For Your Maltipoo (Complete Guide)

Grooming and Bathing Your Maltipoo

The Maltipoo isn’t a breed recognized by the major kennel organizations, so it can’t be considered a show dog.

However, it’s still one of the cutest dogs around and has to maintain its looks to stay that way. Grooming and bathing also have a practical purpose; a well-groomed dog will be happier and less susceptible to diseases, illnesses, and other health issues.

How to Train Your Maltipoo

Performing tricks is one of the ways dogs entertain their owners. There is a sense of achievement in watching a dog do something that has taken a long time to practice.

However, training your Maltipoo isn’t just about teaching it tricks. A dog should be able to recognize its name. It should be able to identify and obey specific commands like “sit,” “stay,” and “come.” With more training, you should also be to train it to stay off particular furniture, stop jumping on people, and also keep off the bed.

It’s your responsibility as a dog owner to make sure your Maltipoo is healthy. A healthy dog is a happy dog. And a happy dog can make its owner smile even more.

There is no doubt a Maltipoo is one of the best dogs you can get not just as a pet, but also as your loyal companion.

Its size makes it ideal for whatever kind of house you have, its attitude makes it suitable for children and adults alike, and its friendliness makes it the perfect companion for any other type of animal.

Do we even have to mention how cute it looks? The process of taking care of a Maltipoo won’t be a walk in the park (although sometimes this may become part of the process), and you may have your patience tried at times during training.

You will also have to clean up after it, make sure it gets bathed, gets fed, stays healthy, and is groomed.

As with any task that bears long-term fruits, taking care of an animal requires commitment. There is no quitting halfway, no throwing in a well-chewed white towel.

The path to success will be marked by sweat, maybe some tears, and a whole lot of treats and worn-down chew toys.

However, you don’t have to face that challenge alone. You can turn to others like your own family members, veterinarians, and like-minded dog owners for help. You might be surprised how owners of dogs are willing to help other owners and dogs as if these were their own.