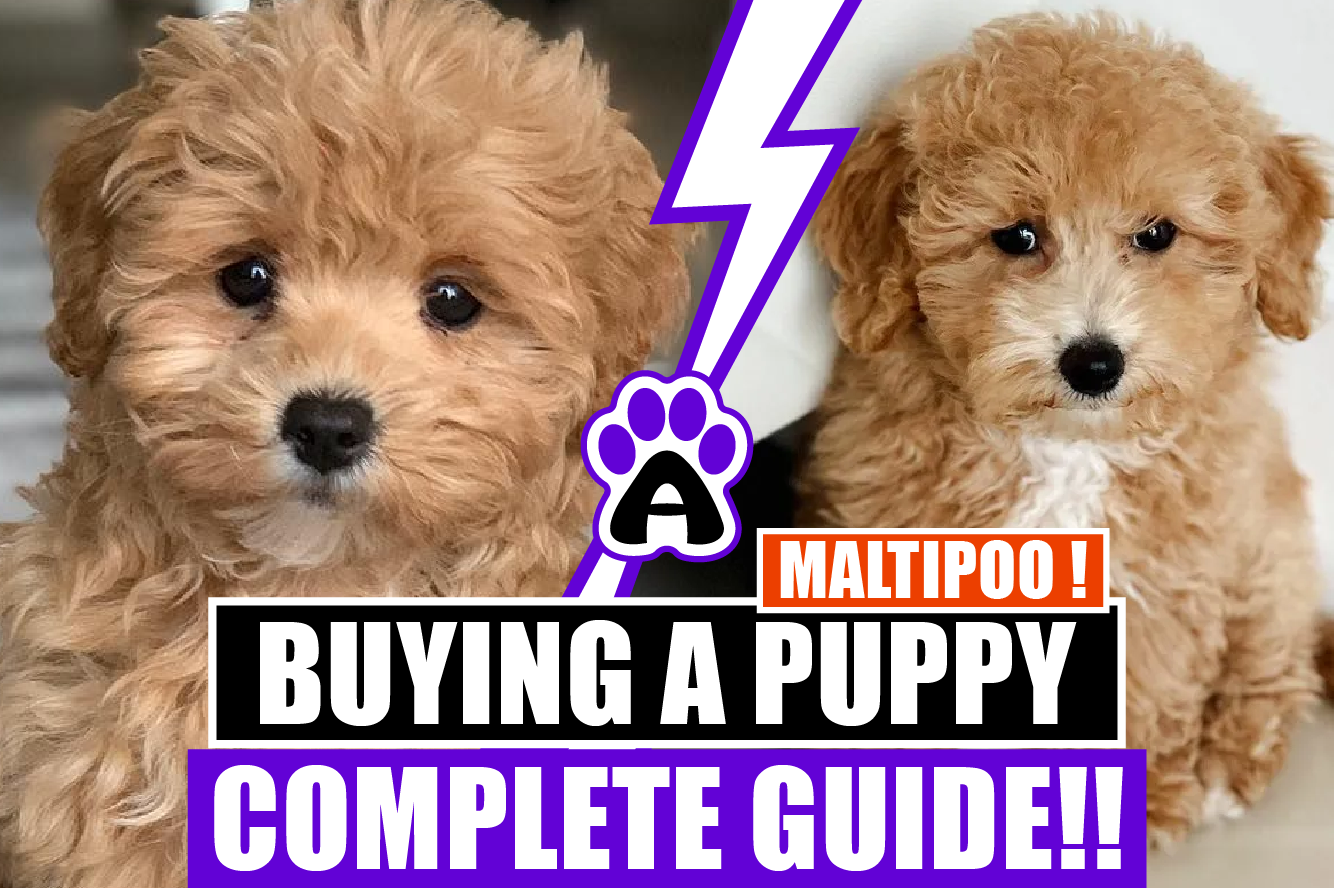 So, you have made up your mind to get a Maltipoo? Where do you get one? The good news is that many breeders can provide you with one.

The bad news? Some of these “breeders” may not be reliable or trustworthy.

This is why it’s essential to ensure you only get from a genuine breeder who knows what he or she is doing.

Where to Get a Maltipoo?

Before we get to the part where you look for a Maltipoo, let’s first talk about where you should not get a Maltipoo. Going to your local pet store may seem like a good idea. They might even have a “Maltipoo” already waiting for you. After all, why not?

The problem is that it’s never apparent where some pet shops get their animals from. They can come from puppy mills or obscure backyard breeders, for all you know. So you can’t be sure if that Maltipoo they say they have for you is a Maltipoo at all.

The pet shop may not even have enough documentation to prove the pedigree of the animal you want. These are just some reasons you should not deal with pet stores.

These are great places to get pet food and other supplies you might need to take care of your pet. However, it would be best to source your Maltipoo from elsewhere.

What about the Internet? You can buy almost everything online nowadays, so why not buy your Maltipoo online?

Again, this is a bad idea if you do the entire process online without human interaction or without getting an idea of how your new puppy has been brought up.

Furthermore, you can’t be sure what you will get is a genuine Maltipoo, and chances are unscrupulous online sellers may only be after your money and will disappear after they get it. The best way to get a Maltipoo is to buy from a reputable breeder. How do you find one? There are several things you can do.

People in this profession are likely to know the who is who in the pet breeding business. This is because the people who work in these two fields share some common interests. Your veterinarian might happen to know the perfect breeder for you.

Do online research followed up by human interaction.

Yes, we warned you against going online looking for puppies. However, it would help if you went online to look for breeders.

A reputable breeder should at least have an established website and preferably allow you to speak to a few of their past clients. Another great place to look for reliable breeders is in our best Maltipoo breeders list. Many of them have affiliated or recognized breeders.

As for online sourcing, there is no shortage of discussion boards, forums, and groups you can ask in your search for a breeder who can provide you with a Maltipoo. You should never be afraid to do this. There may be interest groups in your community that you can consult about breeders.

A critical criterion for coming up with a list of Maltipoo breeders should be how far they are from where you are. They should be within reasonable driving distance.

Indeed, you don’t want that dog shipped from across the country, nor do you want to drive a very long distance just to pick up a puppy.

How Much Should A Maltipoo Puppy Cost?

Speaking of which, how much can you expect to spend on a Maltipoo? Expect one to cost between $500 to $2,000. A puppy from a breeder with an established reputation can also fetch from $700 to $800.

If you are offered a Maltipoo that is way below this price range, you should be wary; it may be a poorly-bred animal or a dog of dubious pedigree.

Should You Get a Puppy or an Adult Maltipoo?

Let’s say you have already decided a Maltipoo is for you. You also already found a reputable breeder you want to buy from; the next question should be, should you go for a puppy or an adult Maltipoo?

Getting a puppy means you will likely become that dog’s first owner. Many dog owners think the bond is stronger between owner and pet if the owner is already there in the earliest stages of the pet’s life. However, this also means you will have to train it from the start to do everything.

On the other hand, getting an adult dog means you no longer have to go through all that training. It will already know how to go potty and have some obedience training as an adult.

It might have even learned some tricks already. First-time dog owners or people who have never taken care of dogs on their own would be best served to go for adult dogs.

Those who have had dogs before or taken care of dogs on their own will usually be able to take care of Maltipoo puppies.

We can define temperament as the general attitude one has towards others. This can be applied to humans as well as dogs. So, what are the attitudes you can expect in a Maltipoo?

Maltipoos will get along with everyone, whether an adult, child, or another animal.

This dog is not the kind to lazily hang around the house when there is playtime to be had. Because Maltipoos are eager to please, this makes them very easy to train.

Maltipoos are smarter than they look and are easy to train. They have also been found to repeat a specific behavior if they find a positive response to it.

Aside from this, a Maltipoo will always be curious about anything new. Expect your Maltipoo to go sniffing at a new dog, a new cat, or a new person they have been introduced to.

Don’t let its small size fool you, a Maltipoo is an animal that requires constant stimulation. This little dog is a bundle of energy, and that energy needs to be burned off. It will enjoy playtime and walking time a lot.

Maltipoos love attention and will respond to love with loyalty. It will constantly want to be near its owner.

Given their temperament, Maltipoos are great to have around others.

All dogs have a pack mentality. This instinct was from when their ancestors used to hunt, survive, and thrive in packs before they got domesticated. Their wild counterparts still practice this in remote regions of the world.

Give the proper introductions and allow adequate time to adapt or get used to them; a dog will come to regard other dogs as part of his pack.

There is no doubt that there may be some competition between dogs in the same living space when it comes to getting your attention or getting food.

However, you should be able to get things under control as the pack leader.

If you already have a cat in the house and are concerned that a Maltipoo isn’t likely to get along with it or, worse, somehow end up hurting the cat, there is no need to worry.

Since Maltipoos are naturally sociable dogs, it is likely they will get along with a cat and will soon even consider it to be part of the pack.

Also, because Maltipoos are primarily small, they will likely respect a cat around their size or bigger.

How do you introduce the cat to your Maltipoo?

You do this the same way you introduce cats to each other. Start slowly by letting them see each other with a door separating them. After they have started getting used to seeing each other, have them both in the same room.

They don’t have to be in the same space or close together but in one room just the same. They will eventually get used to each other.

As Maltipoos are playful by nature, it might sometimes be a little too much for your cat. This is particularly the case if your cat happens to be older. Make sure your cat has places where the dog can’t reach it for when it wants to be alone.

A Maltipoo loves to play and will thoroughly enjoy playing with children. There is a warning, however. Maltipoos are not recommended around very young children.

Children under six years old may not yet be able to discern between playing with the dog and putting it at risk.

Many Maltipoos have suffered fractures after little children picked them up but dropped them after they could not hold on to them.

Rough play from children can also injure a Maltipoo. If there is no way you can’t have one without the other, make sure you are always there to supervise when they are playing together.

It doesn’t matter if you are a person living alone or if you have a huge family. As already mentioned, the dog’s pack mentality will kick in.

And the dog’s concept of a pack also extends to humans. That pack can be as small as just you and the dog, but it can also be as big as you and the dog plus several others.

It will come to consider you and the humans it associates with you as part of its pack. It will come to trust and love people it realizes belong to the pack.

Pros and Cons of a Maltipoo

We all know that everything in life has advantages and disadvantages. What are the pros and cons of owning a Maltipoo?

Is it Easy to Care for Maltipoo?

This is perhaps the biggest question on the mind of anyone who wants to get a Maltipoo.

The truth is that the Maltipoo is just as easy to care for as any other dog. It will require love, attention, care, and the occasional trip to the vet. Also, Maltipoo owners have to remember the following.

You may find less time for other things if you get this kind of dog. So if you can’t commit to taking care of a Maltipoo, then you shouldn’t get one at all.

However, what is certain is that if you dedicate enough time and care to your Maltipoo, it will provide you with endless hours of entertainment and affection.

You will soon find that all the time you devote to caring for your dog will be worth the time lost doing other things.