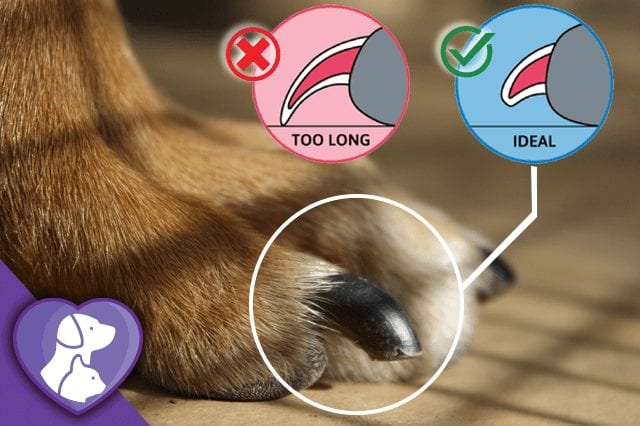 Although dog nails do not usually require any special care, at most cutting them from time to time, in some circumstances they can get damaged or even break.

Those of the dewclaws or those of the fifth paw are the most prone to accidents. Below we will explain what you should do in these cases and what is the proper care for our dog’s nails.

Dogs have a foot with four toes on their front legs, plus a fifth that is located above the footpad. In contrast, the hind legs have only four toes. All of them will have a corresponding nail. In addition, some dogs also have spurs, single or double.

The dewclaws are vestiges of a fifth toe that are located on the inside of each leg. Dog nails grow continuously, so it is not alarming that they break. In general, they wear out with the dog’s usual activity, but those of the dewclaws that do not contact the ground may need trimming.

Dog nails can be black, white, or transparent. Except in the first case, at its base, we will see a pink portion that corresponds to the vascularized area. The nerves and blood vessels are located in it. That is why if the nail is cut or broken in the vascularized area, bleeding will occur.

What is the difference between claw and nail?

The claws are in fact nails that have the particularity of being pointed, sharp, and hook-shaped, while the nails are traditionally flat, curved, or rounded at their end. We thus speak of cat’s claws and dog’s nails, even if the name “dog’s claws” is still commonly used.

Many animals, such as mammals, birds, some reptiles, and even arthropods such as spiders and beetles, have either nails or claws or both (for example, some species of monkeys have a claw and four fingernails on each hand). In birds of prey, we speak of a greenhouse, and in equines such as horses, we speak of a hoof.

Unlike the nails, the claws are retractable in certain species, that is to say, they can be entered into a fold of the skin and be released only as needed. With a few exceptions ( cheetah, raccoon cat, and flathead cat ), felines all have retractable claws.

Finally, the claws play a different role from that of the nails: they allow animals to defend themselves or to attack ( cat scratches ), or to cling to a surface to climb. Nails, on the other hand, protect the fingers, help walking and improve the grip of the paw or hand.

The Anatomy Of The Dog’s Nail

The dog’s nail is made up of two elements:

When we say that the nail grows, we are mainly talking about the horn part. However, when the nail is long for several months, the living part also ends up growing and spreading into the dead part: thus, a large part of the nail can become sensitive over time.

How Fast Do a Dog’s Nails Grow?

Like those of humans and other mammals, the dog’s nails grow continuously throughout its life, in order to compensate for natural wear and tear and any breakage associated with movement and walking.

The speed of nail growth is of the order of one millimeter per week, or 3 to 4 mm per month. Each label is therefore completely renewed in 6 to 10 months on average. As in humans, this speed of growth varies in particular according to the level of activity of the dog, because the micro-shocks that occur at each step stimulate growth. Age also plays a role, as growth is faster in the first two years, and then slows down over time.

The Natural Wear And Tear Of The Dog’s Nails

There is no real rule concerning the wear and tear of a dog’s nails because it depends almost exclusively on the activity of the dog and the type of ground on which it evolves. Thus, nails wear out much more quickly in very active dogs or those spending a lot of time outdoors, such as hunting dogs: their nails therefore rarely reach a critical size, even if they grow a little faster than those of others.

Conversely, the nails of an animal that is not very active and/or living indoors need to overcome the problem of non-natural wear, there are now small mats and coatings made of abrasive material (for example sandpaper) which promote natural wear and tear of the nails when the dog comes to scratch its paws on them.

Anyway, as soon as they get long enough to go beyond the pads, a cut of the dog’s nails is necessary.

My dog ​​has broken a nail and is not bleeding

The nails that are most likely to break, along with those of the dewclaws, are those of the fifth toe of the front legs, but any nail can suffer an accident. They are not very common but blows, snags or some fights would explain broken nails.

If the injury occurs outside the vascularization zone, the nail will break but it will not bleed. In this case, we do not need to intervene, as the nail will grow back.

But if the nail is hanging or with an irregular edge, you have the option of trimming it with a special nail clipper for dogs and be very careful, especially if it is black, because you will not be able to see the vascularization. If you do not dare to cut it yourself, a visit to the vet is a must.

My dog ​​has broken a nail and is bleeding

If your dog breaks a nail in an area that is vascularized, bleeding will occur. In a short time, it should subside thanks to clotting, but sometimes this does not happen. It shouldn’t be serious, the dog is not going to bleed to death, although it may upset your dog.

To stop bleeding you can use a cloth or a gauze, to apply pressure directly on the nail. If after a few minutes the blood continues to flow, a hemostatic product must be used to stop the bleeding. If you do not have one at home, you will need to visit the vet.

If, in addition to the bleeding, the nail is in a poor condition, with a hanging fragment or a sharp edge, it is possible to trim it to make it blunt and even. It is advisable to leave this task to the vet.

How to prevent your dog from breaking Its nails?

We have already said that we must monitor those nails that do not wear out enough or those that belong to fingers or spurs with a greater risk of breakage. In these cases, it is recommended that you cut them as soon as you see that their length is excessive.

For cutting we must take into account the following points:

How Long Do Yorkshire Terriers Puppies Live? How to Extend Their Life? | Latest Updates
Dachshund Lifespan: How to Protect Your Pet From Premature Death
My Dog ​​Ate Plastic: what do I do?
How Long Do Caucasian Shepherd Dogs Live And How To Extend Their Life
Can I give Tramadol to my dog?