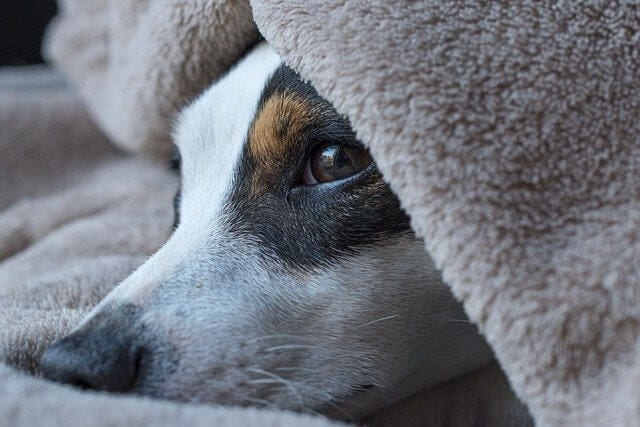 The Jack Russell Terrier is a small dog known for its boundless energy and communicative good humor.

A globally robust breed, the Jack Russell Terrier remains susceptible to certain diseases, some of which are more serious than others.

Do you have or plan to adopt a Jack Russel? Learn about common dog health issues, symptoms to look out for, and steps you can take to protect your pet throughout their life.

Like all breeds of dogs, the Jack Russel Terrier is a breed with its own unique physical traits and character. Recognizable among all, here is what makes the charm of this unique and lively little dog:

A small dog with a compact and rectangular body, the Jack Russel Terrier is 9 to 11 inches at the shoulder and 8 to 14 pounds on average.

It’s dark almond-shaped eyes and movable V-shaped ears that give the Jack Russel that breed-typical lively and intelligent expression.

All three coat types are predominantly white with tan or black markings, or both.

The Jack Russell Terrier first appeared in England in the 1800s and was bred to hunt foxes and small game.

It is therefore hardly surprising that this little dog is lively, curious but also a runaway.

Because Jack Russell Terriers are the kings of escape and love to climb, jump or dig under fences.

A hunter by nature, the Jack Russel Terrier has an instinctive tendency to pursue tracks and hunt all the small preys that pass in Its path.

Fun and friendly, this breed with a strong personality is perfect for families, as long as they are full of energy.

The Jack Russel Terrier is indeed tireless and needs a lot of exercise.

A lack of mental and physical stimulation can cause behavioral problems ( destruction, hyperactivity, separation anxiety, etc.)

With a life expectancy of 12 to 14 years, the Jack Russel Terrier is a robust and generally healthy breed.

Despite everything, the Jack Russel is predisposed to certain health problems that are good to be aware of.

Being aware of the breed’s common illnesses and knowing how to recognize worrying symptoms will help you protect your Jack and act quickly if necessary.

Here are the common health problems in Jack Russels:

Dental infections are very common in this dog breed.

Among the common signs:

Dental disease usually develops from a buildup of tartar on the teeth and can quickly progress to a painful infection of the gums and roots of the teeth.

If a dog has poor oral health, they can end up losing their teeth and developing other health problems with their kidneys, liver, heart, and even their joints.

The regular cleaning of your dog’s teeth is extremely important (at least three times per week).

A daily check of your hand using dental products to help keep a healthy mouth.

The Jack Russell is a breed known to have dental abnormalities.

A veterinarian may recommend the use of braces or the extraction of problem teeth to correct these abnormalities.

Unfortunately, Jack Russell’s can inherit or develop a number of eye conditions, some of which can lead to blindness if not treated immediately, and most of which can be extremely painful!

Glaucoma is one of them.

This extremely painful disease, characterized by increased pressure in the globe, quickly leads to blindness if left untreated.

The signs of this disease are as follows:

In advanced cases, the eye may appear enlarged or swollen, as if it is bulging.

Glaucoma is a medical emergency, so if your dog exhibits one or more of these symptoms, be sure to see a veterinarian immediately

Another common cause of blindness in old Jack Russell is cataracts.

Monitor the appearance of your Jack Russell’s eyes.

If they lose their clarity, a gray haze appears on the eye, and your dog is losing their vision, see a vet.

Dislocation of the lens is an inherited disease, common in Jack Russell, which causes the tiny fibers that keep the lens suspended in the eye to break down and break.

When this happens, the lens can break off.

If the lens falls forward, it can block normal circulation in the eye and cause glaucoma.

A surgical procedure to remove the lens may be necessary.

Dislocation of the lens is particularly likely to develop in old age, but blindness can be avoided if treatment is prompt.

If you notice any changes in your Jack Russell’s eyes, see your vet.

In addition, a genetic screening test is available for Jack to detect carriers of the mutation.

In particular, a Jack Russell is more likely to suffer from a liver disorder known as a congenital portosystemic shunt, which robs the liver of the blood flow it needs to grow and function properly.

An ultrasound of the liver and surgery may be necessary.

Some liver problems can be treated with a special diet and medication.

Cushing’s syndrome is a condition in which the dog’s adrenal glands produce too much steroid hormone and is quite common in older Jacks.

Treatment includes an oral medication and close coordination with your veterinarian to get the correct dosage and follow-up.

This disease occurs when the immune system begins to attack the platelets or red blood cells of the animal.

Your pet’s gums will look whitish or yellow instead of the usual bright pink color.

If the immune system destroys the platelets, the blood will not clot properly and your Jack will also have abnormal bruising or bleeding.

To slow down or stop the destruction of cells by the immune system, your vet will prescribe treatment with steroids and other immunosuppressive drugs .

The Jack Russel needs to be lean and muscular, have a high energy level, and get plenty of exercise to stay in top shape.

Unfortunately, obesity is a common health problem in these dogs and can cause or worsen joint problems, metabolic and digestive disorders, back pain, and heart disease.

To avoid being overweight, don’t give your Jack leftovers, overfeed him with treats, and give him the exercise they need.

Have your dog weighed between exams if you are worried.

Kidney or bladder stones are a common health problem in Jack Russel Terriers.

Veterinarians recommend doing regular urine tests (6 to 12 months) to check for any signs of presence.

If your dog has blood in Its urine, cannot urinate, or shows abnormal effort to pee, make an appointment with your vet.

These stones are extremely painful!

Another common health problem for Jack Russell is a luxating patella.

Among the signs of dislocation of the patella:

Surgery may be recommended to treat this problem and weight control of your dog is essential to avoid complications.

The hip dysplasia and elbow dysplasia is a common problem in dogs and causes poor development of joints in puppies.

Your Jack Russell’s stiff elbows and hips can become a problem, especially when It’s an adult.

Among the signs of dysplasia, lameness, or difficulty getting up.

This health problem can also lead to early arthritis.

Arthritis cannot be treated, but it’s best to deal with it as soon as possible to minimize discomfort and pain.

Overweight dogs can also develop arthritis years earlier than those of normal weight.

It is therefore essential to adhere to a balanced diet and a strict exercise program to avoid the problems associated with obesity.

Some Jack Russell puppies may be prone to a hip condition called Legg-Calve-Perthes disease, which is a painful and degenerative genetic condition.

The exact cause is not yet fully understood, although it is believed to be a problem with the blood supply to the hip, which leads to weakening and easy fracture of the femoral head.

Hereditary deafness was found in some strains of Jack Russell, so if your dog does not seem to respond when you call it, a more thorough hearing test may be necessary.

If you think your dog is not hearing as well as he should, see your vet right away, as the problem could also be due to a serious ear infection.

Dogs can suffer from different types of seizures.

They can be linked to the brain’s reaction to a metabolic problem such as hypoglycemia, organ failure or a toxin, or the result of a brain tumor, stroke, or trauma.

Lifelong treatment can be used to manage severe cases, along with periodic blood tests.

This genetic disease results in poor formation of the pulmonary artery or valve, which causes a partial obstruction of blood flow from the heart to the lungs.

The signs of this disease include:

If the condition is severe, your dog may faint or show poor exercise tolerance.

When diagnosed, your vet will listen for heart murmurs and abnormal heart rhythms.

Detecting heart disease is often a quick way to intervene and prolong your pet’s life.

The surgery may be an option for severe cases.

The Jack Russell Terrier is a very intelligent dog with boundless energy.

It is essential to offer this breed with a strong character sufficient physical and mental stimulation, in order to prevent behavioral problems, such as:

Proper socialization and early training via positive reinforcement are the keys to a balanced and happy Jack Russell.

Cerebellar ataxia is a common inherited disease in burrows that leads to disorders of the nervous system.

The Jack is therefore not spared.

This disease affects the nerve fibers of the central nervous system and indicates a lack of coordination in movements.

Other symptoms can be:

Unfortunately, there is no cure for this genetic anomaly.

Depending on the severity, the dog can live relatively normally.

Euthanasia is however recommended in severe cases of ataxia.

How To Massage Your Dog? Tips and Guide
The Life Expectancy Of A Pekingese & How To Prolong Their Life?
My Dog Ate Fish Bones
How To Comfort a Dog With a Fever?
can a spayed female dog still mate