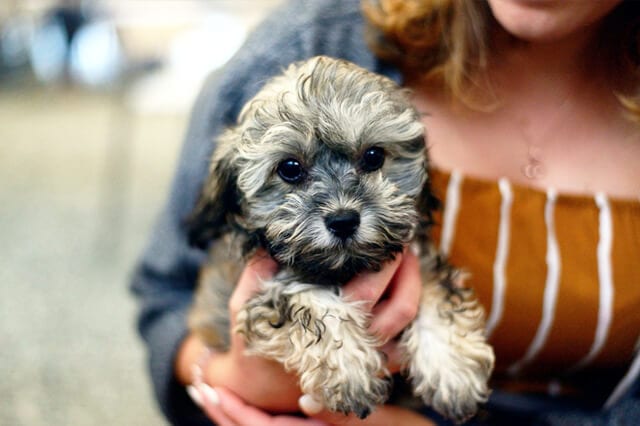 Each dog has its own character, its specificities. This is what makes it unique. However, although breed and size alone do not determine an animal’s characteristics. Small-sized companion dogs have a few common traits and their small temper. Is It compatible with yours? Are its characteristics in line with what you are looking for? We help you to better understand them.

In most cases, small dogs are full of vitality, sometimes a little more nervous than their larger counterparts, they do not lack courage and can be possessive and dominant. They consume less food, but sometimes they run into their bowls and ask for too many treats. To help you choose, Shelter a Pet offers you its test to find out which dog is right for you.

Here are some famous small breed dogs, the Cavalier King Charles, the Yorkshire Terrier, the Boston Terrier, the French Bulldog, the Chihuahua, the Dachshund, the Jack Russell Terrier, the Coton de Tulear, the Maltese, the Havanese, the Pekingese, the Shih Tzu, the Pug or the Miniature Pinscher. The French Bulldog is the heaviest dog breed in the small dog category (30 pounds max).

The benefits of owning a small dog

These dogs are all loved for their adorable, cute appearance, as well as the little physical space they take up. These little animals do not need large living space. Some are all just apartment dogs and are therefore more suited to your pace of life if you live in an apartment unlike a sheepdog for example.

Placing their beds is quite easy, as is their transport. They can be taken anywhere without difficulty, especially on public transport. In the car, their small cage fits easily into the passenger compartment.

The economic aspect of such a choice is also often put in mind. The kibble budget is, of course, lower than that of a large dog, but other major expenses may be necessary, such as for grooming.

Besides, it’s, of course, easier to brush, wash, handle, and care for a small dog than a large one. A task which can however become complicated if the animal is agitated, uncooperative.

Behavior and education of a small dog

Generally speaking, small dogs are known to be a bit more nervous than their larger dogs. They are also very active, intelligent, and often tend to be dominant. They are also quite cuddly.

This is a global observation and there are, of course, exceptions, such as Coton de Tuléar, Bichon Havanais, and Bichon Maltais which are renowned for their calm. Small dogs are also players, full of happiness and sometimes even a little “clowns” at the edges, like the French Bulldog and Boston Terrier. They are therefore perfect companions for children.

For all of these reasons, small dogs need to be educated that is both gentle and firm. They also need to be socialized from an early age. In addition, we tend to want to spoil them by offering them a little too many treats, which can only harm their behavior and their health.

The dietary needs of a small dog

This brings us to the topic of feeding small dogs. It’s clear that Its food needs are different, especially because of Its high activity, Its accelerated metabolism, Its small stomach, and Its small mouth. Not to mention that small dogs live longer and are therefore more exposed to the effects of old age, including oxidative stress.

Energy needs are thus greater and the intake of antioxidants must be properly ensured. Small dogs eat less than large dogs, but the quality of their food is better.

Its stomach is smaller than a large dog. However, its energy need is quite high. It will therefore be necessary to respond carefully to this equation which is to make your dog eat enough without giving It too large quantities each time. The solution: increase the frequency of meals, not doses.

Small dogs should normally eat 2 to 4 meals a day, compared to just one on average for a large dog.

Also, be careful not to water your dog with treats or food that It might not digest well. Its digestive system is more fragile than a large dog. If you start to give It treats too easily, It may become finicky and pickier. Maintain Its routine throughout a life that is usually longer than that of a large dog.