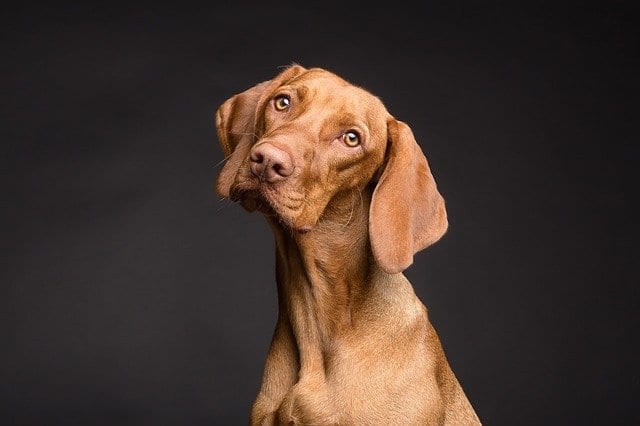 Has your dog been acting differently recently? Does it stare into space, seemingly without looking at anything or facing an empty surface? Let’s take a look at the possible reasons why your dog is staring at the wall.

A dog that occasionally looks at the wall (or a corner) is not a concern for dog owners. However, if the dog is facing the wall all the time or is pressing its head against the wall, this is not normal behavior!

If it’s an older dog staring at the wall, the possibility of canine dementia should be considered.

If you have a problem with a dog staring at a wall then it is understandable that you are concerned about his well-being.

We begin our investigation by looking at similar behavior, but the one that requires more immediate action: the head resting against the wall (head pressing) .

Contents hide
1 Head resting against the wall in dogs
2 The ‘ head pressure is an emergency
3 Forebrain disease in dogs
4 Canine dementia
5 Do you have a depressed dog?
6 Vestibular disease in dogs
7 My dog ​​is staring at the wall or is head pressing

Head resting against the wall in dogs

If you notice that your dog’s head is leaning against the wall, this behavior should seem strange to you.

I’m afraid that this action of resting your head against the wall usually indicates that something is wrong with your pet. This also applies to a dog that walks or collides with walls or doors.

This behavior, known as ‘ head pressing ‘ is a sign of various canine conditions. These include brain tumors, head trauma, encephalitis, nervous system infection, exposure to toxins or poisons, and metabolic problems. Head pressing could also be the result of a vascular accident, better known as a stroke.

Having a stroke isn’t as common in dogs as it is in people, but there are risk factors for dogs. These include metabolic problems such as Cushing’s disease or kidney failure. If your female takes prion or phenylpropanolamine for incontinence, she has a higher risk for stroke. In fact, this drug is no longer available for human use due to the risk of stroke.

The ‘ head pressure is an emergency

Get your dog to the nearest emergency veterinary hospital immediately if you see your dog pressing its head against a wall.

The vet will likely have the dog undergo an MRI.

An eye exam is also conducted.

Head pressing in dogs is only a symptom of forebrain disease.

Other symptoms include seizures, vision problems, and no longer responding to known training cues. If the dog also begins to run in circles or compulsively, suspect the disease of the forebrain.

For some dogs, a diagnosis of forebrain disease probably means that the best option is euthanasia. Other dogs may respond to aggressive treatment. Your vet will advise you on alternatives for your pet.

If treatment is an option, it could consist of surgery and/or drug therapy. Your dog may need a veterinary neurology specialist. Dietary and management changes are also likely.

But what if your dog isn’t head pressing the wall, it’s just staring relentlessly?

Just like people, older dogs can develop dementia. The term used is Dog Cognitive Dysfunction Syndrome, or SDC. A dog staring at the wall or nothing has symptoms of this disorder.

Dogs with CSD can appear disoriented, lost in familiar settings. Affected dogs may roam the house or yard aimlessly. The dog may wander into a corner or behind furniture and appear “stuck”.

Dogs with dementia may forget their training. The dog may want to go outside to go to the bathroom, but then seems to forget why he is there. However, it’s worth remembering that while starting urinating or defecating inside may indicate a mental problem, it can also have a physical cause.

If you are concerned that your dog may have dementia, take it for a checkup. Your vet will perform a physical exam on the dog, along with diagnostic tests to rule out underlying medical conditions. Fortunately, there are medications available for canine dementia. It eases many symptoms and improves the quality of life for you and your pet.

Do you have a depressed dog?

If your dog sits facing the wall day after day, it may be suffering from depression. Again, dog depression symptoms are no different from those that plague humans. Look for less activity, withdrawal from people, and personality changes.

It’s not just a dog facing the wall that indicates depression. Other symptoms indicative of a depressed dog include excessive licking and chewing, changes in sleeping and eating habits, and a loss of interest in activities that one enjoyed.

If your dog is no longer thrilled with the prospect of a walk or car ride, something is wrong. Dog depression can result from physical problems, so take your dog to the vet for an examination.

The causes of depression in dogs aren’t always obvious, but sometimes they aren’t difficult to understand. Losing an owner, family member, or other pet can lead to depression. Any significant changes – such as moving to a new home or schedules that leave less time for the dog – can cause depression.

Depending on the diagnosis, behavioral therapy can help your dog return to what it always used to be. Medicines, including the types of antidepressants used to help people, also lift the spirits of dogs. Yes, depressed dogs can be prescribed Prozac or Paxil and these drugs can make a difference in your dog’s mood.

If you notice your dog colliding with a wall along with other strange symptoms, it may be suffering from vestibular disease. The vestibular system maintains balance. When it doesn’t work, things go wrong. The condition is so common that it has earned the nickname, “old dog’s disease”.

In addition to disorientation, symptoms of vestibular disease include tilted head and loss of balance. The eyes begin to snap, a condition known as nystagmus. Overall, it’s a scary scenario.

The vet will perform a clinical evaluation of the dog. A blood and urine test will be conducted. If a tumor is suspected, an MRI is done.

Treatment depends on the diagnosis. A dog with a middle ear infection receives antibiotics. Sedation can help dogs that fall or collide with walls.

Try not to panic, as there is good news on most cases of vestibular disease.

Most dogs recover within a few weeks, as long as the causes are not cancer or life-threatening disorders. Once they recover, dogs return to normal, although some may maintain a head tilt.

My dog ​​is staring at the wall or is head pressing

If your dog is staring at the wall, there are various possible reasons, ranging from dementia to dog depression.

But a dog that does head pressing (presses its head against the wall) is even more serious.

Knowing that this is a neurological problem allows you to take quick action and possibly save your dog’s life.

This article is purely informative, at Shelterapet we do not have the right to prescribe veterinary treatments or make any type of diagnosis. We encourage you to take your pet to the vet in case It has any kind of discomfort.

10 breeds of Small dogs Toy, Dwarf, Miniature
The Chocolate Labrador
Choosing a Female Dog
Choosing Your Dog's Gender: Male or Female ?
10 Questions to Ask Yourself Before Adopting a Dog