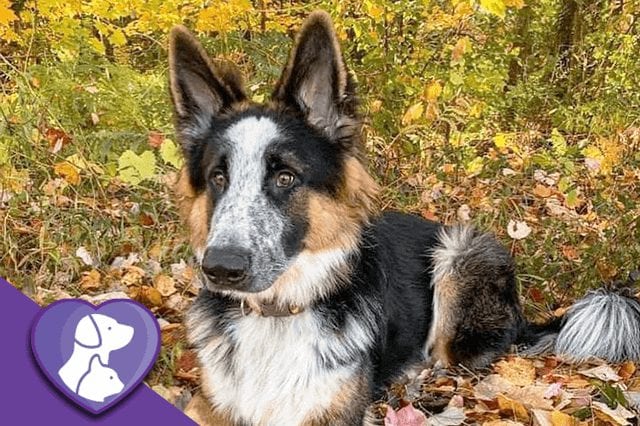 The panda German shepherd dog is a beautiful species whose genetic mutation gives rise to one of the most beautiful and sought-after animals since 1 out of every thousand German shepherd dogs has this peculiarity, which is why it is one of a kind: a true beauty of nature.

Normally there are many doubts around this breed, so those who search for the term “panda shepherd” tend to conclude that panda herders carry a white gene of the S locus (which normally causes dogs to have white markings ).

However, that’s not true. Much of what you see online is misinformation. So what is the truth about this incredible breed?

Franka was the first German panda shepherd. Both of Its parents were pure German Shepherds and they were given a blood test to be Franka’s parents. Its parents had job titles that meant they were tough, watchful police dogs.

It goes without saying that the breeder was shocked when observing this very different puppy, so UCDavis (in charge of doing studies) proceeded to do tests on Franka’s DNA.

UCDavis discovered that Panda is a result of the KIT gene mutation. The KIT gene controls cellular functions, and this gene inadvertently affected color. There are no known health problems associated with the gene, and it is known to occur in other species and races.

What is the KIT gene?

KIT mutations are known to cause blue eyes and always cause random white markings. White often resembles Irish White or Piebald White, which appears at Locus S in other dog breeds.

Scientists have so far known which genes a dog has at the S locus, which allows us to determine what causes the coloration in the dog.

Mutated KIT dogs cannot “carry” the gene without expressing it. The gene is dominant as well, making it very easy to trace it into lineages. Unless a cub has randomly mutated the KIT gene, a parent MUST have a visible KIT mutation to produce panda offspring.

So these factors are important in determining whether there is any chance that parents will have a chance to have a German Shepherd Panda puppy.

Because any white marking is regarded as a fault of marking, many German Shepherd enthusiasts have found that this color is a crossbreeding with Colles or similar breeds.

Many traditional breeders also believe that this color is a poor resource (stock) and that many breeds of this color violate the GSDCA Code of Ethics. Many argue that pandas should not be bred or allowed to breed.

There seems to be an increasing acceptance of the color within the pet community. Many people who are looking for uniquely colored German Shepherds are looking to adopt panda shepherds.

This spice has characteristics very similar to those of the common German shepherd, and they are:

The temperament of the panda german shepherd

They are very familiar dogs

This means that they love being around their families, but maybe wary of strangers. This breed needs its family and should not be isolated for long periods of time. They only bark when they deem it necessary.

Due to their audacity, they are often used as police dogs, the Panda Shepherd has a very strong protective instinct and is extremely loyal to its handler, so aggression and attacks on people are due to poor handling and training, for what should be watched this aspect.

Difficulties That Could Arise Regarding Its Personality

Almost everything is good with these beautiful puppies, but problems arise when an owner allows the dog to believe that It’s the leader of the group over humans or the dog is not given the mental and physical exercise it needs to remain stable.

This breed needs an owner who has a natural authority over the dog in a calm, but with firmness, confident and consistent manner, so they must be firmly trained in obedience from an early age.

This dog breed will be happy just lying in the living room or locked out in the backyard. This breed is so intelligent and learns so easily that it has been used as a sheepdog, guard dog, in police work, as a guide for the blind, in search, rescue, and in the military

The German panda shepherd is one of the most prominent breeds,  and its nose can even detect frogs.

Do you have one?  if you do, be a good caregiver and train It very well and you will see the benefits of these beautiful dogs

Adopting An Adult Dog
Choosing a Male Dog
Why Should You Adopt a Small Dog Breed?
10 Tips for Traveling With Your Dog
6 Fact About The Red Fox Lab (Pictures included)