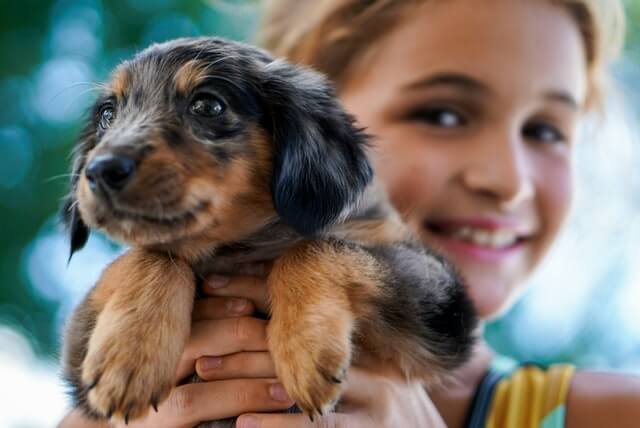 Some dogs have a character much more suited to cohabitation with children. Breed alone is not enough to determine an animal’s ability to behave well with younger people. Children must also be prepared by their parents to live with the dog. Just as precautions are to be taken so that this great experience takes place in the best possible way.

Having a dog in the family can be beneficial for children in more ways than one . Being around such loyal, intelligent, and endearing animals helps them build their personality and acquire real principles of life : respect, friendship, sharing, among others.

Most children themselves express their desire to have a dog in the house. Tender, playful, and protective, they are first-rate companions for them. However, it should be remembered that adopting a dog for your child, among other things, must be a carefully considered act.

You have to take into account that having a dog can be a bit of a problem early in its education.

Teach your child to respect the dog

As much as the education of the dog, that of the children must also prevail when one envisages making them cohabit. It is essential to explain to your child that the dog is a living being in its own right and that he/she must therefore treat It as such. In other words, respect it. Usually, a child is able to understand this concept only from the age of 7 or 8.

Make him/her understand that the animal is not a toy, that it has feelings and needs. The dog can be happy, sad, jealous, confident, suspicious, terrified. It needs to love, to feel loved, to have reference points, to feed Itself, to be quiet, to sleep, to rest.

All of this must be developed with the child. Also, prepare him/her for the idea that they will one day have to take care of it.  Letting your child brush the dog, taking It for a walk, and giving It Its meals helps to empower the child and make him/her feel valued

Children’s organisms are vulnerable to bacteria and microbes. The presence of a dog can cause some concern at the level of hygiene, you must pay particular attention to this aspect.

The dog must, of course, be potty trained from an early age. It will take several months to fully integrate it, which means that some accidents will occur in the meantime. Hence the importance of deworming the animal and explaining to children that it is not necessary to touch its droppings.

Also, teach your little ones not to put their hand in their mouth after playing with the dog or with the objects it has touched. Try to keep the house clean at all times and to remove the dog’s hair as much as possible, as it is potentially dangerous for the health of the youngest.

Keep an eye on them

Despite an excellent education and a very good character, it can happen that a dog has an unexpected reaction in certain situations. The young child (between 2 and 6 years old) can, for example, pull on its tail or step on its paw, causing in the animal a brief outburst of anger, but which can have unfortunate consequences.

Stay alert and remind your child to be careful not to rush the dog. Also, avoid leaving them alone, especially if your child is young.

Some breeds are known for their kindness towards children

The breed does not by itself determine the behavior of the dog towards children, we must also stop thinking that small dogs are less dangerous than large dogs. On the contrary, small breeds more often resort to violence. However, some varieties have traits that make them more apt to mix with them.

misconception to ban: a small dog is less dangerous than a large dog.

Small dogs include the Cavalier King Charles, Pug, French Bulldog, and Coton de Tulear. These little balls of vitality and intelligence are great companions for children.

For medium-sized breeds such as Boxer, Labrador Retriever, Golden Retriever, Australian Shepherd, Collie, and Brittany Spaniel, all of which are very kind.

As for their large congeners, including the Leonberger, the Newfoundland, the Bernese Mountain Dog, the Cane Corso, and the Saint-Bernard, they combine patience and the ability to bring a sense of security to their little ones.

5 Important Things To Teach Your New Dog When It Arrives Home
How To Choose a Dog For Apartment Living?
6 Fact About The Red Fox Lab (Pictures included)
Why Should You Choose a Medium Dog Breed?
10 breeds of Small dogs Toy, Dwarf, Miniature