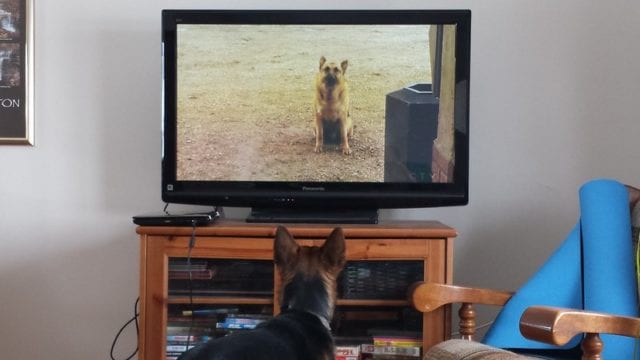 Although it is not their favorite hobby, the truth is that some dogs are very interested in television and are able to watch it for a long time, beyond reacting to certain sounds.

So much so that there are specific shows for dogs. But can dogs really watch TV as we understand it?  we are going to review how dogs see and what they can do in front of the television.

Contents hide
1 How dogs see
2 Why do dogs like to watch TV?
3 Television for dogs
4 Can my dog ​​watch TV?

As far as vision capacity is concerned, dogs have some similarities and certain differences with ours. Thus, although the idea that they can only see in black and white is widespread, the truth is that they do appreciate colors and in a similar way to that of people suffering from color blindness.

Most people are able to distinguish red, green, and blue. Dogs only differentiate between blue and yellow. On the other hand, they are good at distinguishing shades within the shades of gray. This allows them to see better than we can when the light is dim. That is, at dawn and dusk, which are its most active moments of the day.

In addition, their field of vision is greater than ours and they appreciate moving objects better. This characteristic is much more important for dogs than differentiating colors, which is of interest to us. This fact, together with the fact that they capture images faster than we do, helps explain the attention that television on can arouse.

Considering the characteristics of canine vision, it is not likely that they will spend hours in front of the screen as we can, since they will not get hooked on an argument or understand what is happening. But there are specific moments in which almost all dogs can draw attention to the television on.

In addition, modern high-definition televisions offer more frames per second. As they are faster than us at capturing images, these state-of-the-art devices will be more attractive to them. Especially when animal images, chases, stampedes, barks, or any other animal sounds are broadcasted.

That is to say, they fixate on moving images, which they easily detect, and, furthermore, on noises that they capture with one of their most developed senses: hearing. Today it is also claimed that they are able to recognize their peers on the screen. It has also been proven that some breeds are more sensitive than others to the attraction of television.

In 2013 in the United States, a specific channel for dogs was developed. It is also possible to access different videos through the internet, theoretically designed for them. Given the success achieved, dog television has spread to different European countries such as Germany or France.

The canine channel broadcasts 24 hours a day. It is based on the reproduction of different images that are said to be designed, colored, and adapted so that, together with background music, they attract the attention and interest of the dogs. A stimulating and relaxing effect is sought.

They are short videos that are broadcast continuously, without interruptions for advertising, since the dogs cannot maintain their attention for long. Putting the TV on for some specimens can help them pass the time when they have to be alone. We can try, but the interest in television will depend a lot on each dog.

Before leaving our dog alone with the TV on, it is convenient to check that it does not react negatively. Some dogs get very nervous with sounds they do not know where they are coming from and could bark, howl and even throw themselves on the TV, causing a real mess.

The TV can also suffer an accident if our dog is one of those who are dedicated to looking behind the screen for the origin of sounds. Other specimens of those who like television, get too close to it and try to participate in what they are watching, fidgeting and moving from one side to another, which is another risk factor for the integrity of the television.

Therefore, if we want them to watch TV, it must be located in a place that they cannot access. Be careful because dogs are not cats, but they can also climb on furniture. Finally, it only makes sense to leave the TV on or subscribe to a canine channel if it brings any benefit. If your dog is completely ignoring the TV, don’t force it either.

5 Important Things To Teach Your New Dog When It Arrives Home
How To Choose a Dog For Apartment Living?
Which breed of dog to adopt for the first time?
Choosing a Female Dog
Why Should You Adopt a Large Dog Breed?