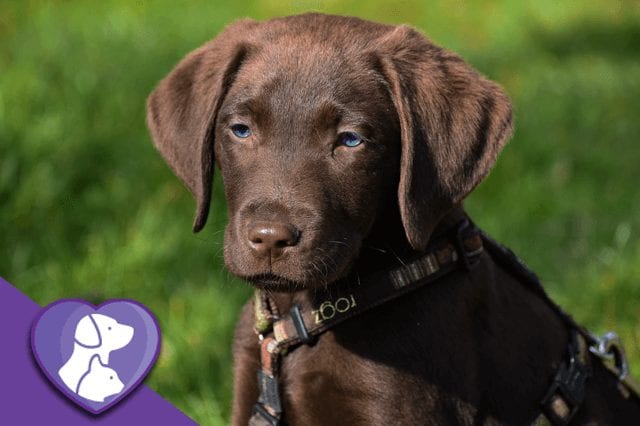 This is one of the most frequently asked questions labrador lovers ask. Many people look for it as if it were an advantage on the contrary it is an undesirable genetic defect in breeding.

In the Labrador the color of the eye must be dark in the shade of brown (never black) and not even light (blue), this applies to all the colors of the coat.

However, genetic and pigmentation problems in blue-eyed Labradors can play a major role in health.

The chocolate Labrador Retriever, initially known as the “ugly duckling”, is now among the most sought after colors of the breed.

With Its captivating personality and willingness to please; the chocolate Labrador, together with the yellow, the red fox, and the black Labrador, have conquered the first place among the hearts of millions of dog lovers.

In fact, the Labrador Retriever has been and still is the most famous dog in the United States for the past 28 years, according to data from the AKC ( American Kennel Club ).

History of the Labrador Retriever breed

The chocolate Labrador Retriever was accepted into the breed standard long after the yellow and black Labrador.

It was only in the 20th century that this color was recognized in the United States. Up until then, both chocolate and yellow were considered to be out of standard.

These two colors, compared with the black Labrador, were not considered suitable for reproduction and above all not suitable for beauty tests.

The brown color in Labrador is not a simple recessive gene. It is a much more difficult color for breeders to properly select and have chocolate labrador puppies with the same dark shade and intensity of color.

The temperament of the chocolate labrador

Like all Labradors, the chocolate-colored ones have a friendly and sweet disposition, their eyes are the part that communicates the most and the tangible proof of their gentle soul.

Bred as a hunting and water retriever dog, this breed has innate recovery and energy abilities, making it an excellent working dog.

The Labrador is easy to train through positive reinforcement and small rewards – this leads to It being an excellent dog in field trials, agility trials, and obedience.

Stable and reliable, this breed is well known as a rescue dog, rubble search, assistance dog for the disabled, and as a guide dog for the blind.

Its intelligence, kindness, and adaptability have made It very popular as a family pet: in fact, the Labrador today is one of the most popular breeds in the world.

Blue Eye color in the Labrador

There are only over 300 dog breeds and each can have a different color which mainly depends on genetics.

According to the breed standard in Labradors, eyes must be brown or hazel,  eyes that are too light are considered a defect.

So to clarify the standard of the Labrador Retriever to everyone, It specifies that the color of the eyes should be brown in black and yellow Labradors (not black) and brown and/or hazelnut in chocolates which is usually reached around 2 years of life. as the development of the melanosomes that determine the color of the iris in chocolate is slower than in black and yellow.

The Structure Of The Dog’s Eye

Dog’s eye, also known as the eyeball, is a spherical organ that plays an essential role in the dog’s sight.

It is made up of a gelatinous substance called the vitreous body, surrounded by three protective envelopes: the inner coat, the middle coat (also called the uvea or vascular layer), and the outer coat. The latter is the most resistant layer of the eye: it maintains its structure and protects it from shocks.

These three layers are themselves made up of several elements that work together in the reception and processing of images. We can cite among them:

The eyeball is housed in the orbit, a bony cavity in the front of the skull and covered with a protective membrane. Oculomotor muscles connect it to the bottom of the orbit: it is they who, as their name suggests, are responsible for eye movements. Just above the globe, at the level of the orbit, is the lacrimal gland: its role is to hydrate the cornea by producing tears.

Finally, like several other animal species, the dog has three protective eyelids: an upper eyelid, a lower eyelid, as well as a third transparent eyelid called the nictitating membrane. Depending on the shape and size of the eyelids, dogs have rather round or almond-shaped eyes, rather small and sunken or on the contrary big and protruding.

The Color Of The Dog’s Eyes

At birth, all puppies have blue or gray-blue eyes. The final color of the dog’s eyes does not appear until after two or three months, thanks to pigments located in the eye. Traditionally, the eyes of an adult dog are brown in color, but certain genes can influence the action of the pigments that color the iris and give rise to variations.

These differences in coloring have no impact on the dog’s vision. On the other hand, they can be the consequence of eye diseases or genetic abnormalities which can have the effect of degrading eyesight. Certain colors may also be considered an eliminating defect by the standard of the corresponding breed.

Blue eyes are often considered the most beautiful. There are currently four factors that can lead a dog to maintain blue eyes in adulthood.

The most frequent case is linked to the presence of the merle gene, responsible as its name suggests for the merle color of the coat of certain dogs

This gene randomly dilutes parts of the pigmentation of the coat, eyes, and nose, which is why such dogs often also have small spots on the nose. The gene can also alter the formation of the ear during the puppy’s prenatal development and cause congenital deafness.

When the cells responsible for coloring the hairs are unable to produce melanin, they appear white respectively. This is, for example, what occurs in individuals with wholly or partially white coats.

When such dogs develop in their mother’s womb, it sometimes happens that these cells unable to produce melanin accidentally migrate from certain areas of the coat to the eyes or nose. This then causes a local pigmentation deficit: the nose can appear pink, and the eyes can remain blue, even in adulthood.

This very particular and still poorly understood case remains very rare: it seems to be able to occur only in dogs with very white coats or with numerous white spots around the eyes.

Canine albinism is an inherited genetic disease that causes a severe deficit or even an absence of melanin production: as a result, the skin and hair are very light or even white, the nose is pink and the eyes are blue.

Due to melanin deficiency, such dogs are very sensitive to light and sunburn and are also predisposed to certain skin cancers. Cases of albino dogs are very rare; the Dobermans seem predisposed, but even in this race, the disease is exceptional.

A gene unrelated to the coat

Finally, the last case that can cause an absence of pigmentation in the eyes is linked to a gene that is unrelated to the color of the dog’s coat, unlike the previous cases. This rare gene is common in Siberian Huskies , but it can also be found in representatives of other breeds.

It is assumed that this is a recessive gene, that is to say, that both parents would have to pass it on to their little one so that it has blue eyes. Such dogs can have a wide variety of coats and do not necessarily have a pink nose.