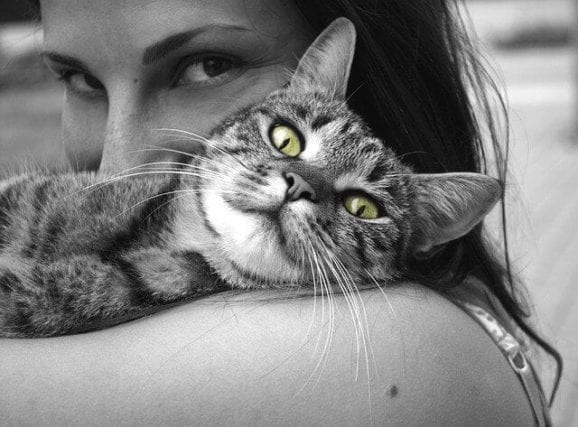 While some cats can’t stand being touched on the lower back, others love it. Indeed, it is enough to scratch their buttocks a little to make them completely hammer. But why? What can do them so good? And does such gesture have a sexual character for them? Answers!

Before attempting to understand what cats can feel when they are stroked at the base of the tail, it’s necessary to clear up one point.

Contrary to what we hear regularly, our feline friends are not the independent and asocial creatures that we believe. Indeed, they actually need interactions with their owners and affection just as much as dogs.

Thus, when a cat is left alone for several hours locked in an apartment, it’s good to know that it’s not indifferent to It. And this even if, on the return of its owner, it does not show any outpouring of joy. This does not in any way mean that It’s not happy to see the owner again. Indeed, felines have a very particular language, much more subtle than that of dogs.

And for good reason, a cat can show its affection to its human simply by rubbing against them, blinking gently, or sleeping next to them.

A gesture that releases pheromones

Now that the basics have been laid, it is necessary to understand what lies at the base of cats’ tails. There are scent glands there that release pheromones when stimulated. However, pheromones are the most common means used by cats to communicate.

Indeed, these substances give off an odor that only animals can perceive. And which gives a lot of information about the cat that issued them. When sniffed by another cat, they can indicate several things. It could be Its age, Its sex, Its state of health, or even Its sexual state (if It’s in heat).

These are the pheromones that cats use to demarcate their territory. Indeed, since the smell of these pheromones is unique to each cat, it’s an excellent way for them to recognize each other, even from a distance.

All it takes is for a cat to rub against a tree to release pheromones and indicate to the cat who will pass that spot several hours after that tree has already been tagged.

So when you stroke your cat at the base of the tail, you release its pheromones. Therefore,  you cover yourself with its scent. However, for cats, it is very important that all the elements of their territory (furniture, humans, animals…) have the same odor. This allows them to immediately recognize the members of their group. In addition, it gives them a feeling of security.

Note that cats also have pheromones behind the ears, on the cheeks, or between the pads.

A gesture that reminds them of their mother

There is another reason that could explain why many cats love to be stroked on their buttocks. When they were kittens, their mother used to lick their anus regularly. Why? To help them pass their stools, quite simply.

Therefore, instinctively, when you stroke your cat’s buttocks, your cat remembers the soothing sensations It experienced when It was little. Even if it’s completely independent in terms of cleanliness!

In addition, your cat has a much more developed nervous system than yours. Which makes It more sensitive to caresses. In fact, felines have no less than 19 million nerve endings, located all over the body. Against 5 million for humans!

It’s for this reason that the sensations caused by caresses can quickly become unpleasant for them, pushing them to bite or suddenly scratch their human’s hand.

Black Munchkin Cat | Genetics, Price, Breeders...(With Pictures)
Can Cats Understand English & Other Languages!?
Teach your cat to stop scratching the sofa in 7 days (or less)
Diabetes in cats: symptoms, causes, treatment and prevention
Maine Coon Cat 5 Mix Kittens | All What You Need To Know (With Pictures)