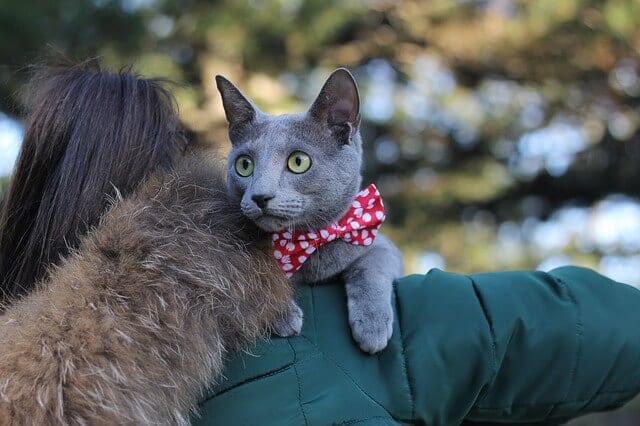 Cat eyes are all beautiful and enchanting. Let’s find out together the cat breeds with green eyes.

Contents hide
1 Cats with green eyes: That’s What They Are
1.1 Persian Chinchilla
1.2 Havana brown
1.3 The Nebelung
1.4 The Oriental
1.5 The Korat
1.6 The Singapura
1.7 The Russian blue
2 Breeds of cats that can have green eyes
2.1 Related posts:

Cats are all special, whatever the color of their eyes. Many people wonder if felines can also have green eyes.

If you are wondering too, the answer is yes! Many people who have a cat also consider felines that have yellow or green eyes.

Let’s see together what are the breeds of cats that have green eyes.

Cats with green eyes: That’s What They Are

Kittens, when they are born, have all their eyes closed, in fact, the first days of life they live in darkness. When a kitten starts to open its eyes are they will be a blue color.

At 6 weeks the cat’s eye color begins to change and is established when the cat turns 6 months, some blue, some green. Here is a list of cats with a green color.

These are cat breeds in which the green color of the eyes is preferred , but which, in theory, can also have irises of other colors:

The Persian Chinchilla cat is a long-haired, medium-large, and robust breed of feline. The color of Its eyes is usually green while Its eyelids are black.

The Havana Brown is a cross between a Siamese and a domestic black cat. This cat breed has deep green eyes.

The Nebelung is a very rare breed of cat, which features a semi-long coat. This cat species also has eyes of an emerald green color.

The Oriental cat is a very elegant feline breed that features a slender body and large ears.

This breed also has light green eyes, but the White Oriental can also have one green and one blue eye.

Originally from Thailand, the Korat is seen as a lucky cat. It’s a breed of cat that despite having short hair, Its hair is really soft. It also has shiny green eyes.

The Singapura is a cat breed that has a rounded head and pointed ears. This species of feline also has green eyes, and also has two almond-shaped eyes.

The Russian Blue cat is a medium-sized feline with a wedge-shaped head and large ears. This species of feline has almond-shaped eyes that are green in color, except the Russian Blue which has a white coat, which has blue eyes, or one blue and one green

Breeds of cats that can have green eyes

In this case, we are talking about cat breeds in which the breed standard does not specify a particular eye color, so it means that they can also have green eyes:

What Is The life Expectancy Of a Cat?
Do Cats See In The Dark: Interesting Facts, Features Of Cat Vision
This Is Why Cat Eyes Glow In The Dark?
Why Don't Cats Always Cover Their Poop?
Black Turkish Angora Cat | Genetics,Price,Breeders...(With Pictures)