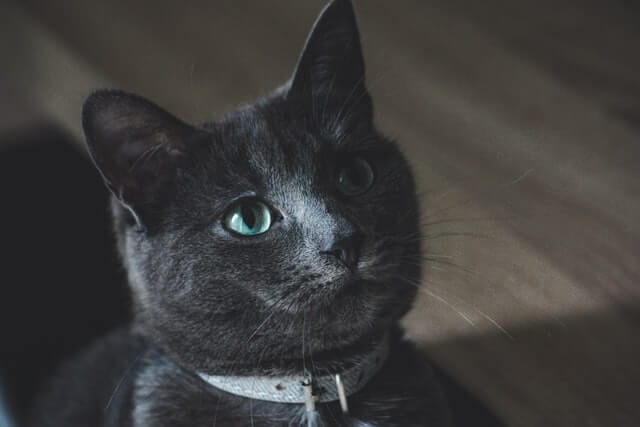 Black cats rarely have blue eyes. Except for the blue-eyed mutation of one breed, the Ojos Azules. A blue-eyed wild cat of tortoiseshell color was discovered in Mexico in 1984 and was named by the nickname Cornflower.

Later, the breed was subjected to multiple crosses, as a result of which a variety of mutations of black color was obtained. Blue-eyed blacks cannot be crossed with cats of the same characteristics, since the offspring is not viable.

Why are cats born with blue eyes?

All cats are born with blue eyes, and this is because their young eyes, or more precisely the pigmented cells contained in them, have not yet begun to produce melanin, responsible for the coloring of the iris.

The blue color of the eyes is not created due to a blue pigment, but the iris appears in this color when the pigments are absent or present in small quantities.

The blue we see is therefore the effect of light reflecting on the iris and dispersing it.

At what age do kittens’ eyes take on their final color?

Kittens’ eyes begin to color around 5-7 weeks of age. Within 12 weeks this pigmentation process stabilizes, resulting in the final eye color. However, it is not uncommon for some cats to show their final color a little later.

If an adult cat has blue eyes, it means that this pigmentation process has not occurred or has occurred less markedly.

A blue-eyed cat is therefore a cat whose eyes actually lack pigments!

Blue eyes, a question of genetics

The blue eyes of cats are almost always associated with two particular coat colors: the white coat and the colorpoint coat (ivory / brownish hair with darker shades of color on the face, tail, and legs) typical of the Siamese.

The blue eyes of white cats

The gene responsible for blue eyes in white cats is the White gene. It is a dominant gene, which masks the expression of all other colors, in a more or less severe way.

When this is expressed in totality, we speak of cat albinism.

The White gene, responsible for the blue coloration

The mechanism of action of the W gene affects the entire coat of the cat, but not only. The embryonic cells that determine the skin pigment also generate the pigment of the fundus of the eye and the pigment cells of the inner ear.

If the action of the gene, in the phase of initial cell separation, also involves the cells responsible for the formation of ocular tissue, the inhibition of pigmentation results in the fact that that eye will have, at the end of growth, a blue or blue color clear.

This pigmentation process by the W gene can be more or less severe: it can happen that one eye is depigmented and the other not, giving rise to fascinating uneven eyes.

This phenomenon is called heterochromia of the irises. If the action of the gene also affects the ear tissues, you may have malfunction or deafness, mono, or bilateral.

The blue eyes of Siamese cats

Siamese cats however have poor three-dimensional vision, probably due to a different conformation of the ocular membrane, known as tapetum lucidum

What is tapetum lucidum used for?

The yellow/green reflection typical of cats’ eyes (which can be seen well in photos taken with flash) is determined by an ocular membrane called tapetum lucidum.

In blue-eyed cats, this reflection appears red in color, just like in humans. The glossy carpet works as a reflector. It reflects light in the direction of the source, with the least possible dispersion. Thanks to it, the cat’s vision does not lose clarity or contrast.

In Siamese cats, there is an alteration of this membrane which results in reduced three-dimensional vision.

The first Siamese cats were often cross-eyed, to compensate for the visual gap: with the selection, this defect was removed.

The hereditary tendency to be deaf is always linked to the dominant White gene, so it can affect white-coated cats and albino cats.

There is no hereditary deafness in Siamese and Oriental cats (and all other colorpoint-coated breeds).

When to suspect deafness in cats?

The first thing to observe is whether the white-haired puppy has colored spots on its head: in this case, the probability that it is deaf is around 30%, while it rises to 50% if there are no spots.

The possible explanation is that if some hair pigment cells have arrived at their destination, it is plausible that the same has happened for those of the inner ear, sometimes sufficient to avoid deafness.

The second correlation is given by the color of the eyes.

Based on a series of studies conducted in various countries, we can say that:

Note that when it comes to deafness, it can be both mono and bilateral.

To check if your cat is hearing impaired, stand a few feet behind him and clap your hands or make a loud sound. If the cat reacts and looks in your direction, it means that it can hear.

For the test to be meaningful, the cat must not notice that you are in the room: cats are very sensitive to vibrations and deaf cats also react to them.

It was said that if one of the parents had the blood of a Siamese cat, a blue-eyed kitten would occasionally appear. All Siamese have blue eyes, and long-haired cats such as Siamese ragdolls and Birman also have blue eyes.

Blue-eyed black cats are not limited to short-haired and long-haired cats, but they seem to be found in both, but they do not seem to be established as species.

The blue eyes of black cats are rare because of the inferior gene. Among kittens, they have blue eyes called “Kitten Blue”, but when they grow up, they change to yellow, orange, or green.

Purebred cats with blue eyes: here are all the most beautiful!

Are you fascinated by sapphire eyes? Here are a few blue-eyed cat breeds, all of which are beautiful – you’ll be spoiled for choice!