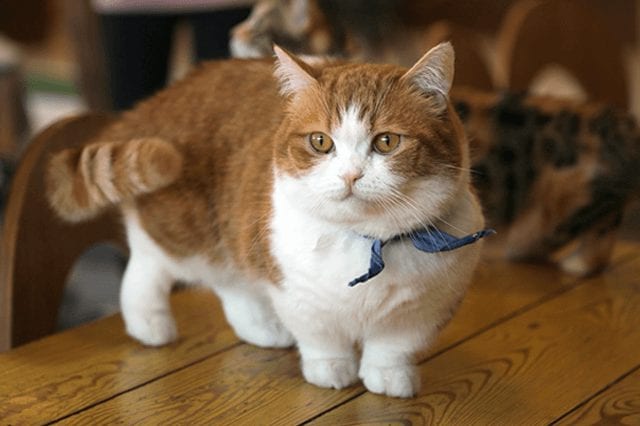 Let’s introduce the characteristics, history, and personality of short-legged cat species such as the munchkin.

The short-legged Munchkin also called the Dachshunds are called so because, compared to other breeds of cats, they have shorter and smaller legs due to a genetic mutation maintained over time by farmers.

Recognized as an official breed, the controversy is still open on this breed, even if the public loves its small size, which makes its physiognomy sweet and nice.

In fact, there are many such short-legged cats other than munchkins. It is basically a mixed breed of munchkin and other cat breeds.

Let’s take a closer look at the history and personality of each short-legged cat, such as the characteristics of each cat and which cat species it was born from.

History Of the Munchkin

Short-legged cats were reported to exist in 1944, but not as a cat species, but as a mutation.

Short-legged cats disappeared after World War II, but after that, they were reported again in various places, and breeders started breeding short-legged cats.
Munchkin’s coat and coat color are diverse because they were born by crossing with various cat species, which is one of the attractions of Munchkin.

At that time, there seemed to be controversy due to various problems, but in 1995 the Munchkin was certified as a new cat breed.

The munchkin is a relatively popular cat species, so many of you may know it.
The characteristic of such a munchkin is its cute short legs. However, there are actually long-legged munchkins as well as short-legged cats.

Munchkin short-legged cats are said to account for about 20% of the total, and it seems that there is a higher probability that long-legged munchkins will be born. However, it is said that there is no difference in personality and nature even if the length of the legs is different

Registered in the Guinness Book of Records

The short-legged munchkin is said to be the smallest in the cat world, and in 2014, a 5-inch tall munchkin was registered in the Guinness Book of Records as the lowest cat in the world.

It is said that the Munchkin is named after the dwarf “Munchkin” who appeared in The Wizard of Oz.

Munchkin with a playful personality

Munchkins are curious and play-loving. It is also said to be a kind of cat that is friendly and can get along with other animals.

Although it is a short-legged cat, It’s a cat species that is very good at exercising and can easily jump and climb trees.

The minuet is a cat species born from the crossing of Munchkin and Persian cats.
Characterized by the short legs of the Munchkin and the fluffy long hair of Persian, the minuet has short legs but looks gorgeous and elegant.

The skeleton is solid, similar to the Persian, with small ears and rounded tips.

Cat breed created by a breeder of short-legged dogs

Minuet was first born in 1996, and it is said that a breeder named Joseph Smith, who likes short-legged dogs, was fascinated by the existence of short-legged cats.

This cat used to be called “Napoleon”, and in 2015 the name was changed to “minuet”.

Minuet with a friendly personality

Minuet’s personality combines both Munchkin’s curious personality and Persian’s spoiled personality. It’s not very cautious, so it has a friendly personality that makes It feel nostalgic for visitors.

Kinkalow is a mixed breed of Munchkin and American Curl, and is a kind of short-legged cat that is said to have been born around 1990.

Some kittens have short limbs and curled ears like the American Curl, and because they are short, their tails are longer. It has a soft, silky coat, and the color and pattern of the coat vary.

Origin of the Kinkalow name

Kinkalow has a strange name that is not so familiar. The name Kinkalow is said to have been extracted from “kinky” which means curly and “low ” from the short legs.

Kinkalow with a wise personality

Kinkalow is a lively and playful personality. In addition, It has a clever side like a dog, and It can learn tricks!

Skookum is a type of short-legged cat born by mating a Munchkin and a LaPerm.  They sometimes call it the “Skukuma”.

It was born in 1990 as a result of a certain thought of an American breeder, and that thought was “I wanted to create a cat with short legs and curly hair.”

Skookum the cat that does not meow

Skookum has a cheerful and lively personality and is a friendly sweetheart.
It is also suitable for condominium owners because it has a calm side that is less likely to meow and is called a “cat that does not meow”.

Many short-legged cats look cute, but Genetta is a type of cat that is both cute and cool.

Genetta is a cat species born from the crossing of Munchkin, Bengal, and Oriental Shorthair. Although it is a short-legged cat, it has a wild pattern of Bengal.

Genetta was born in 2006, and it seems that it is a cat species made to resemble African Genette.

The feature is that it inherits the Bengal spots, the marble pattern, and the long torso of Oriental Shorthair on the short legs.

Lambkin is a  short-legged cat born by a Munchkin breeder who is active in the United States by crossing Munchkin and Selkirk Rex.
By the way, this breeder is also famous for creating the Kinkalow.

Lambkin was born in 2003, and of course, it’s a short-legged cat, even as an adult cat, it looks like a “fluffy kitten”.
It is said that it was named “Lambkin” because it resembles a lamb because of its fluffy curly hair and small body appearance.

It weighs only 5-8 pounds and is curled up to the beard.

Lamkin’s personality seems to be either a curious munchkin or a calm Selkirk Rex.
However, it is considered to be an easy-to-keep cat breed because it does not make a lot of noise.

Bambino, a short-legged cat, was born from a cross between a munchkin and a sphinx.
The new cat breed was certified in 2006 as a cat breed.

The name Bambino means “baby” in Italian.
The combination of the hairless sphinx and the short limbs of the munchkin makes it a good idea to name it the baby.

Bambino that greatly inherits the characteristics of the Sphinx

A major feature of Bambino’s appearance is that it does not have the coat of other cat breeds. The skin with a few downy hairs is sometimes referred to as the surface of a peach.

It also has sphinx-like large ears, slim physic, and slightly raised eyes. The abdomen is soft and chubby.

A personality that gets along with other cats and children

Bambino has a cheerful and energetic personality and likes to exercise. They tend to have the flexibility to make friends with small children and other animals.

In fact, there is a short-legged cat called Minskin a cat breed that is older than Bambino.

It is similar to a Bambino in that it is a cross of Munchkin and Sphinx, but Minskin is also mixed with Devon Rex, Birman, and Siamese.

Minskin with more hair than Bambino

Bambino is a short-legged cat and hairless, but Minskin is also characterized by having Farpoint.
Some parts of the face, ears, tail, legs, etc. have hair, and the other parts are hairless or thinly haired.

It weighs 4-6 pounds, which is the smallest of all cat breeds. Some call it the “Corgi of the cat world” because of its chunky body shape.

Minskin is lively, agile, and smart. It has a loving personality and loves Its owner.

Some short-legged cats have athletic ability and leg strength that cannot be imagined with their short limbs, and other short-legged cats that were basically born by mating with a munchkin seem to be friendly and play-loving. ..

There are various charms depending on the cat breed, so please find your favorite feline!