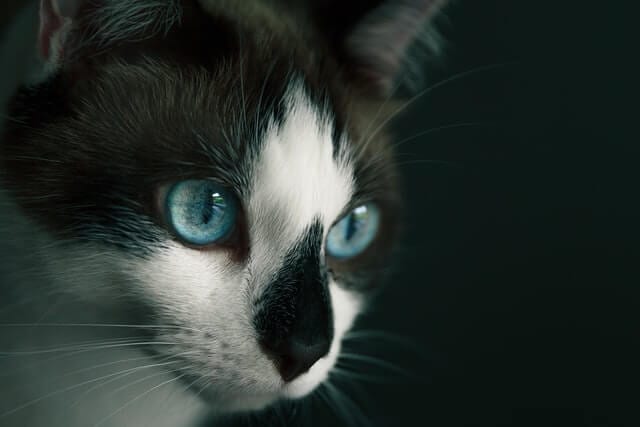 Cat and dog owners often mistakenly think that our animal friends see the world in black and white. However, that’s not the case! A cat is a hunter and if Its eyesight is not as good as ours, it is sufficient to allow It to catch its prey without worry. Experts claim that cats are color-blind animals that perceive only yellow, green, and blue colors.

How Does a Cat See The World Around It?

Do cats see colors? First of all, it is virtually impossible for your four-legged friend to distinguish between red and green. True color blind, the cat has a global vision that could be described as pastel.

Thus, red and green appear dull to It, tending more towards pale yellow. This is normal since the feline has much fewer cones than the human. It is the latter that allows the eye to see all the colors that surround us.

How Is The Cat’s Vision Different FromThat Of Humans?

To compare it to human vision, that of a cat is similar to that of a presbyopic and myopic man. Clearly, your cat sees rather badly from near and not very well from a distance!

So that It can see you correctly, stand about 1 to 3 feet away so that It realizes that you want to capture Its attention. But even if the cat sees blurry, it remains a real hunter, and It’s far from being disadvantaged by Its vision.

A vision necessary for survival

Cats are, without a doubt, natural predators. They have always had to learn to hunt in the wild. And if vision is important, it is not the cat’s main asset. It makes much more use of Its other senses, such as hearing and smell, which are highly developed.

This is why, over many years of evolution, Its vision has adapted to work in a team with the other senses.

A broader vision adapted to movements

The cat has a field of vision of 200 degrees, while that of humans is 180 degrees. In addition, the animal has an excellent retinal refresh rate, which allows it to have a vision totally adapted to catch moving objects. Add to that his ability to run fast and you now understand why your pet is a real living tiger!

It is not a legend, the cat sees very effectively at night since it is a nocturnal and twilight hunter. Its night vision is between six to eight times better than that of humans. Light-sensitive receptors, more commonly known as rods, line your pet’s retina.

Thus, its ability to open the pupils much wider allows it to let in more light rays, and therefore, gives it an almost perfect night vision.

How To Best Protect Your Cat’s Vision?

To preserve your cat and ensure Its health, it is important to have Its eyesight checked every year during the veterinary check. Finally, if you notice an anomaly in the behavior of your animal (It stumbles and/or bumps everywhere) which may be linked to a drop in Its eyesight, do not hesitate to contact a specialist who can take it in charge as soon as possible.

If you notice dryness or deposits in your cat’s eyes, equip yourself with a small cleaning product for its eyes. Certain food supplements also make it possible to prevent the appearance of eye diseases in cats.

In summary, a cat does not see all colors, but only certain shades of color. Its visual acuity is, therefore, five times weaker than ours, and It’s only sensitive to the wavelengths of blue, yellow and green: a cat is a dichromate animal. To live well, the latter does not need to visualize a large range of colors, because Its other senses are there to take over!

What is the temperature of a cat?
My cat is coughing: the 7 causes of cough in cats
Why Does My Cat's Butt Stink? 7 Reasons
How Long Do Persian Cats Live? | How To Extend Persian Cats Life? (Complete Guide!!)
How Long Do Sphynx Cats Live | Life Expectancy of Bald Cats at Home