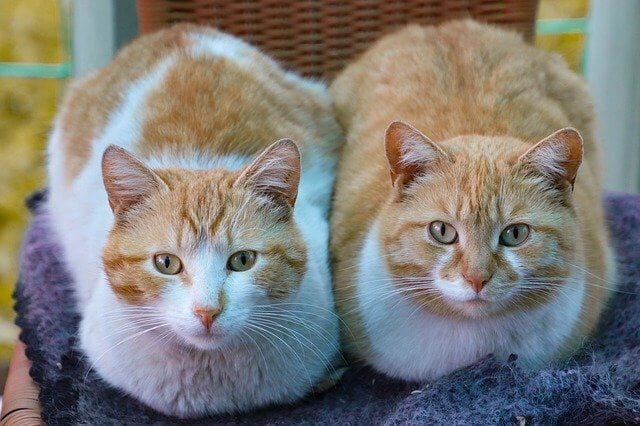 Cats often play and sleep together, and they do it to each other with wonderful tenderness.

Some owners of multiple cats sometimes notice ” ambiguous sexual attitudes ” towards cats of the same sex.

This can lead to some doubts and often ask if: can cats be gay?

Knowing if a cat can be homosexual or gay is more complicated than you think and it is very difficult to answer.

To date, no research has been conducted to prove whether cats may or may not be gay.

However, some feline behaviors can be noted that can be interpreted as gay or homosexual.

Reasons Behind Such Behavior

Although homosexual behavior appears to be common in the animal world (observed among 1500 species and, especially among social species of birds and some mammals), survival and reproduction are the basic instincts of an animal.

Thus, a homosexual orientation, if we can speak of cats, does not seem to be very rare.

When observing some animals, including cats, there are two things that need to be taken into consideration: one is behavioral, and the other is motivation.

All possible explanations for defining homosexuality in cats are made from a purely behavioral point of view, which is genital contact, stimulation, courtship, and affection between cats of the same sex.

However, the motivation and implication behind this behavior is still unknown.

The cat may simply mistake the neutered cat for a female and attempt to reproduce.

When two male or two female cats come into contact sexually, it is all for a display of power, and not for sex, and usually occurs when another is introduced into the house or when the cat is stressed and wants to demonstrate something.

To establish a hierarchy, the stronger cat mounts the other cat.

This is because male kittens produce a different smell than adult cats.

It often occurs when a new male kitten is introduced into the family, and already has an adult, healthy male cat.

For example, when two lionesses take care of cubs together.

It’s simply an excess of sexual activity in conditions of extreme frustration: in fact, it was possible to observe that the animals that had behaved in this way, later mated normally if they were with the right mate.

Although there are different theories and motivations around the idea that cats may or may not be gay, to date, there is no scientific evidence for cats’ different sexual orientations.

So, are there gay cats?

It is possible, but it is not scientifically confirmed

Why is my cat's fur changing color?
My Cat is Sneezing What Are The Most Causes?
Why Does My Cat Smell Like Urine? 5 Reasons
Why Is My Cat Attacking Her Kittens?
My Cat Cant Urinate: What Can I Do?