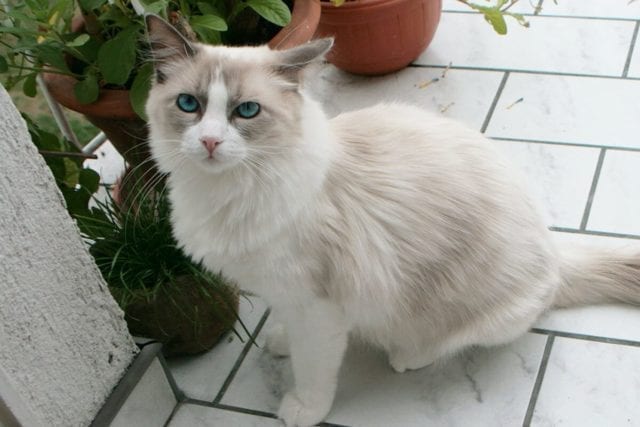 The Ragdoll cat is a particularly calm, patient, and docile animal. It’s also characterized by a formidable faculty of adaptation which allows It to acclimatize to most lifestyles. However, It greatly prefers quiet and secure environments.

Never aggressive, of legendary gentleness, the Ragdoll is a breed of relatively recent creation and which soon became very popular, first in the United States, then with families in the rest of the world, especially in Europe.

Thanks to Ann Baker, breeder of Persian cats in Riverside, California, that we owe the creation of the Ragdoll breed in the early 1960s. She had obtained it by crossing a Persian Angora cat and a Sacred cat from Burma,  giving birth to a companion of exceptional sweetness. Ann Baker gave her the name Ragdoll.

She then registered several of her Ragdoll cats with the National Cat Fanciers’ Association. Ann Baker also ceded representatives of the new feline breed to Denny Dayton and his wife Laura.

The couple played a fundamental place in the development of the Ragdoll.

Very popular in the United States, the Ragdoll began to be recognized by various major American feline authorities during the 1970s, notably the TICA (The International Cat Association).

The first exports then took place, first in the United Kingdom, then elsewhere in Europe,  France in particular in 1986.

The sweetness of the Ragdoll is one of its main character traits. This cat does not emit or manifest any form of aggression. It’s also known for Its extreme patience, which makes It an ideal companion for children. Very calm and discreet, It constantly seeks peace.

It doesn’t appreciate solitude either and spends most of Its time with Its master. The Ragdoll is primarily an indoor cat, preferring the tranquility, comfort, and safety of a home to the hustle and bustle outside.

Although It’s calm and patience allow It to adapt to all family structures and most environments, the Ragdoll is more of an indoor cat than a feline destined to explore the surroundings of Its home.

Its needs, in terms of output and activity, are much lower compared to other cat breeds. It’s better to keep it safe as it is not good at defense if it were to be attacked, including by a congener. Apartment life is therefore perfect for It

The Ragdoll is characterized by generally solid health, but the breed can be affected by 2 diseases which also concern many other feline varieties HCM and PKD.

The HCM or hypertrophic cardiomyopathy (Hypertrophic Cardio Myopathy-) is a heart disease that affects both those alley cats with pedigree. The most affected individuals are young adults (around 2 years of age).

It gives rise to symptoms of acute congestive heart failure: pulmonary edema, pleural effusion, arrhythmia… There is a DNA screening test for HCM.

The PKD ( polycystic kidney disease – Polycystic Kidney Disease) is a kidney disease. It corresponds to the formation of more or less numerous cysts in the kidneys, leading to renal failure.

The life expectancy of a Ragdoll is between 12 and 17 years.

Being endowed with a mid-length coat and a moderate density undercoat, the Ragdoll is not a tedious maintenance cat. Brushing it regularly helps ensure the beauty and cleanliness of its coat and the good health of its skin.

The Ragdoll does not go out very much and therefore has less opportunity to get dirty.

Brushing the Ragdoll should be done once or twice a week to help get rid of its dead hair, and thus prevent the hair from ending up in large numbers in its intestine and forming trichobezoars(hairballs).

The Ragdoll may also need to take a bath from time to time. Dental care is essential to prevent periodontal disease caused by tartar, as is the regular trimming of the nails.

Because they are less active than many other cats, the Ragdoll can be prone to overweight. This means that Its diet must be adapted by avoiding providing It with too many carbohydrates and fats.

It’s, therefore, better to provide it with high-end kibble, offering it quality proteins and a complete and balanced range of nutrients. In addition, this form of dry eating will help It maintain Its teeth. The cat must also have fresh and regularly renewed water.

Is Ragdoll Right For You?