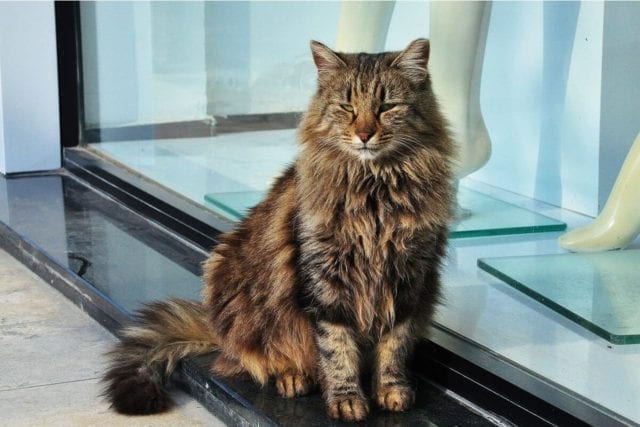 The Maine Coon Cat is, along with the Savannah, one of the largest cat breeds. Its length can easily exceed 40 Inches. The Maine Coon is also a giant with a tender heart, who prefers cuddles and tranquility to strenuous activities. It’s a  pleasant companion, including for children and Its congeners.

The ancestors of the Maine Coon cat are said to be long-haired cats who arrived with the first Europeans who settled in America. Among these animals, the most resistant managed to adapt to the harsh climatic conditions of the region corresponding to the extreme northeast of what is now the United States, and more precisely the State of Maine.

Hence the name of the breed. According to other sources, the ancestors of the Maine Coon would have been brought to the American continent long before by Viking explorers.

More and more farmers in the area became interested in the Maine Coon, which they appreciated as much for its beauty as for its ability to hunt pests. From the second half of the 19th century, representatives of the breed began to be presented during cat shows.

After a long period marked by a certain lack of interest in the Maine Coon, in particular, in favor of the Persian, the breed regained its letters of nobility in the 1950s. It was also at this time that its first club  was founded in the United States: the Central Maine Coon Cat Club.

20 years later, the Maine Coon breed was recognized by the Cat Fanciers’ Association (CFA), a major feline club across the Atlantic. The Fédération Internationale Féline (FIFe), in turn, recognized it in 1983.

Very attached to Its master towards whom It’s extremely affectionate, the Maine Coon is a cat who can even tend to be “clingy”. Very playful animal, It’s not however a great sportsman. Its peaceful character and Its patience make It an excellent companion for children, as for the rest of the family for that matter.

Calm and never aggressive, It prefers to flee rather than retaliate if It were to be pushed around. The Maine Coon also has a reputation for being a cat that expresses itself enormously through a variety of vocalizations. Easy-going and particularly sociable, they accept other cats and animals in general quite easily.

The Maine Coon adapts to all living conditions. It can thus live happily in an apartment in the heart of the city as in a large house in the countryside.

It should however be remembered that, even if this cat is not excessively active, it can happen to move away to hunt and let express its natural curiosity, exposing itself then to various risks of accident. The Maine Coon is also known to love water.

In addition, it should be vaccinated against classic diseases: rabies, typhus, leucosis, and coryza.

The life expectancy of a Maine Coon is between 15 and 20 years .

Despite its large size, as well as the length and density of its coat, the Maine Coon is not a tedious maintenance cat. Its coat is rather rustic, requiring only a good brushing every week. During the moulting period, it should be brushed more frequently, ideally every day, in order to help it get rid of dead hair.

This treatment also prevents It from swallowing too large amounts of hair when It grooms.

In addition to weekly brushing and the fact that the cat cleans itself by licking itself, the Maine Coon can be washed 2-3 times a year. The baths are done with a suitable shampoo and the cat must be well rinsed and dried.

Its ears and eyes should also be inspected regularly. The hygiene of the Maine Coon also involves the choice of its litter , which must obviously not be too small, otherwise, the cat would risk abandoning it to defecate elsewhere. Without forgetting the regular disinfection of its environment, starting with its basket.

The Maine Coon reaches its adult size around 4 or 5 years old. It must therefore eat more kitten food when young, based on kibble with a high percentage of nutrients. Subsequently, Its diet consists largely of animal protein such as meat and fish.

Sardines, for example, are to be preferred to tuna, which may contain more heavy metals. In addition, the water requirements of Maine Coon are important. Thus, it may be a good idea to combine dry (kibble) and wet (mash) foods; the first will help prevent pie formation, while the second will help hydrate the cat.

Without forgetting, of course, to leave a source of fresh, clean, and regularly renewed water at its disposal (bowl or fountain).