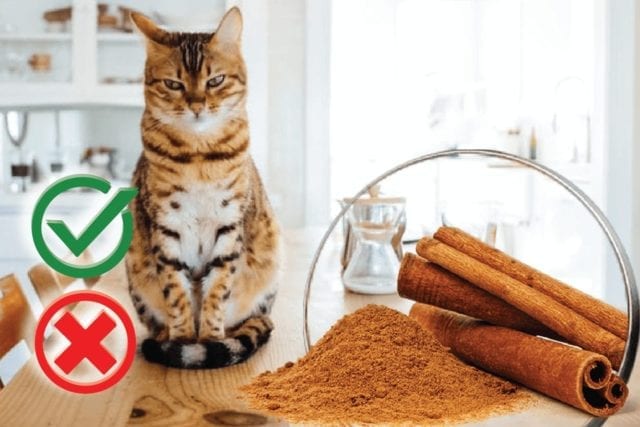 Cinnamon is known for its characteristic scent. It is one of the familiar spices used not only for cooking, but also for sweets such as cookies, drinks, and bread. It is also known as a Chinese herbal medicine under the name “Cinnamon bark”. It is also said to have a nourishing tonic, blood circulation promotion, and sedative effect, and it seems to be good for the body, but in fact, it’s prohibited to give cinnamon to cats. Introducing the ingredients of cinnamon and its effects on cats.

Cinnamon contains attractive ingredients such as calcium and iron, but given the effects of coumarin on cats, don’t give cinnamon to your cat.

A curious cat might steal its owner’s cinnamon roll. In that case, wait for a while and consult your veterinarian if your cat experiences any symptoms of concern.

Calcium not only strengthens bones and teeth, but also supports the smooth progress of nerve and muscle activity, and is also known as a “natural tranquilizer.”

Cinnamon is high in manganese. Manganese is a type of important mineral that greatly affects the formation of articular cartilage and nerve function in cats. A lack of manganese can lead to dysgenesis.

Cinnamon contains a large amount of coumarin, which has a high antioxidant effect. Some people may think that it is an ingredient that they want to take positively, but in fact, it is necessary to be careful.

Coumarin is hepatotoxic (has toxic and harmful to the liver). Therefore, for humans, the daily intake of cinnamon is about 0.6 to 3 g. You have to be careful not to overdose. Naturally, cats that are smaller than humans are more affected by coumarin. Therefore, it is not desirable for cats to consume coumarin.

Why do cats hate the smell of cinnamon?

Cinnamon, also known as the “King of Spices,” has a unique scent. While some people like this scent unique to cinnamon, there are many who say, “I don’t like that scent and can’t eat cinnamon.”

The unique scent of cinnamon makes cats feel more stimulating than humans. In fact, many cats don’t like the smell of cinnamon. For this reason, cat repellents and anti-marking sprays that use cinnamon-based fragrances.

Be careful of the essential oils used for aromatherapy

The scent of cinnamon, which is said to have a relaxing effect, is sometimes used for aromatherapy. However, the essential oil used for aromatherapy is a tightly concentrated plant component. Therefore, even if it is of natural origin, it will cause great damage to cats. Licking the essential oils that might cover your cat’s body or cooking aromas at home can make your cat sick.

Be careful when handling essential oils, not just cinnamon. Avoid using aromatherapy in your home, or, if you really want to, in a room where cats don’t go in and out.

What to do if your cat eats cinnamon?

Should a cat eat cinnamon, let’s wait for a while. If it is a small amount, it will not affect the body immediately. However, in some cases, It may be in shock, so please be prepared to go to the hospital at any time instead of taking it easy.

It is also effective to call the veterinary clinic and ask for instructions as soon as it turns out that the cat has eaten cinnamon. If your cat has any physical problems such as diarrhea or vomiting, go to a veterinary clinic immediately.

Cinnamon is a harmful spice for cats. Even if the food is tasty to humans, be careful not to drop the food waste when eating sweets containing cinnamon in the environment where cats are around.

Just because your cat swallowed food scraps does not mean that it will soon be in a serious condition. However, please observe the cat’s condition carefully and check if there is any change in Its physical condition. If It has any symptoms such as diarrhea or vomiting, see a medical institution immediately, and get treatment.

As long as you have a cat, you should avoid using cinnamon for aroma. Use other essential oils or refrain from aromatherapy itself.