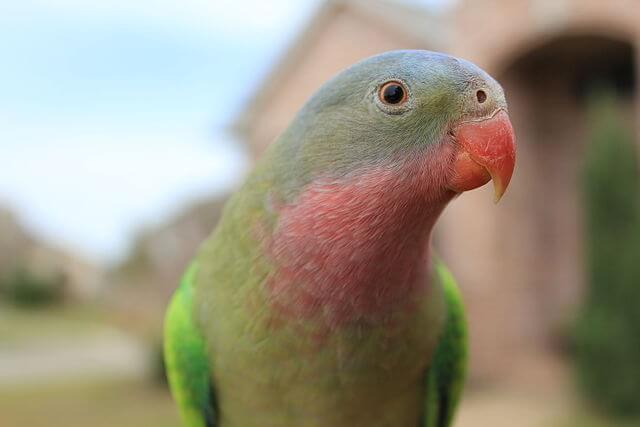 They are medium-sized parrots around 14-18 inches long and 110-120 grams in weight. Their plumage is mostly green with pink on their throats, a blue crown, and light green feathers on their backs.

They have blue backs and the tail feathers are long and thin, with more bright colors in the male than in the female. The male’s beak is coral red, the female is less colored while the male eyes have an orange iris and the female is brown. Three mutant species are known: Lutino, Blu, and Albino.

Of all the parakeets in Australia, the Queen is one of the last known because in Its natural habitat Its is very elusive. It lives in arid forests and reserves filled with plants such as eucalyptus, spinifex, and acacia and lives in small groups out of the breeding season. They prowl around the area for food and water and are parrots with disturbing behavior – in which the group turns on a predator to chase it.

If in the wild these birds tend to live in groups for long periods of time, experienced breeders recommend keeping only one pair per enclosure. They can live with other peaceful parakeets such as the Grass Parakeet family. If you keep them in a cage, it;s advisable to have a pair of birds as they are social animals and need company.

These birds need a lot of exercise so an aviary may be the best option for them. If they have to live in a cage, it’s best to get one as large as possible, as well as offering them time outside the cage for exercise. An ideal flight measurement would be 13 feet by 3 feet wide. Being very curious birds, when they are out of their cage they will discover their environment so making the rooms they can access parrot-proof is a good idea.

While not noisy birds, Parakeets can make high pitched sounds and noises, very often when they are frightened but also during the breeding season. Most of the time they are very quiet, friendly, and intelligent birds that, when hand-fed, will bond very closely with their family.

These birds won’t get wet very often but will appreciate a spray bath with a drizzle of water, particularly on warmer days .

As for health, these birds are prone to worms, so regular worming treatment is recommended to avoid any problems, usually around three months. This is because they love to rummage on the ground for food and therefore are more prone to having parasites.

A seed mix for large parakeets is ideal for these birds among vegetables, grass, and fruit. They will appreciate eggs on occasion and corn should always be on hand.

It’s also good to include pellet in the diet to make sure all nutrients are present. When they have chicks, feeding them sprouted seeds is another good option to help parents balance the baby’s nutrients. This can include sprouted beans and sunflower seeds.

A wide range of fruits and vegetables can be offered to them to see what they like. Chard, endive, broccoli, sweet potatoes, and beets but also regular vegetables such as spinach, kale, and carrots. They often like corn on the cob and apples.

Wild herbs are a great snack for these birds, but be careful where you get from them – if they are on the roadside they may have come into contact with pesticides and therefore be dangerous. Many people grow wild herbs, to the desperation of gardeners, to be sure of their origin.

In the wild, parakeets do not have a set period but are brought to breeding under the right conditions, usually when there is a large amount of food. They will nest in a eucalyptus tree or oak and lay four to six eggs. Incubation is around 19 days and they put out their feathers at around 35 days.

In captivity, i’s said that they sometimes have difficulty reproducing. First, they need a nest box of about 3.8 square inch with a height of 19-23 inches and an entrance hole about 4 inch wide. It’s best to hang the nest box in the overcast night house and at a very high point. The female incubates with the male who brings her food so that she does not have to leave the nest.

When the young are feathered, they are fed by both parents for about four to five weeks until they are completely independent. Maturity ranges from seven months to one and a half years depending on the bird, and reproduction should not be allowed until it’s two years old.

The main reason this can be a problem is that the female breaks the eggs if something scares It. For this reason, some breeders use a particular nest box to avoid this problem. These boxes contain steps to allow the birds to climb and descend to the eggs and then walk where the eggs are located. Another option is L-shaped boxes which work in a similar way.

They are intelligent and friendly birds that will be tamed with ease and that they will bond with the whole family, not just one person. They are less noisy than other parakeets and adapt to new homes. For those looking to breed them, with some changes from normal it should be relatively simple.

Parrots and Stress: Causes, Symptoms and Solutions
My canary is not singing: Why and what to do
The Guide To Bird Seeds
Cockatiels Life Expectancy And Living Conditions
25 Interesting and Fun Facts About Budgies