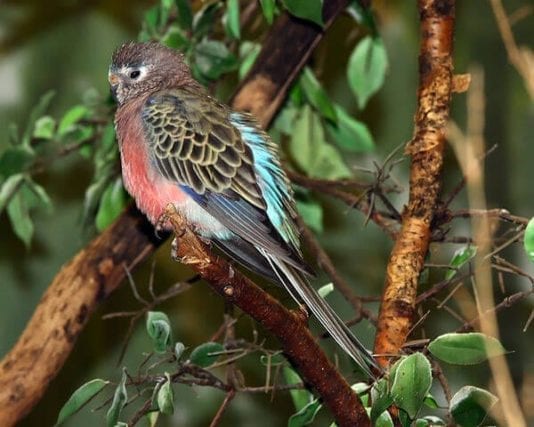 The Parakeet Bourke (Bourke’s Parrot ) is closely related to the Australian parakeet Neophema. It was named after General Richard Bourke, Governor of New South Wales from 1831 to 1837. They have been bred in captivity since 1877.

They live everywhere in the central and southern interior areas of the United States, but also in the west. They prefer to live in arid and semi-arid steppe zones and live in pairs or groups of no more than 10-30 specimens. In Australia, they are protected, but their numbers are growing thanks to this.

The wild version of the Bourke is a brown bird with a pink abdomen and chest and a blue back. The male has a blue forehead which is absent in the female. As the name implies, they eat herbaceous plant seeds and are especially active at sunrise and sunset.

These birds are called parrots, but in size, they are closer to parakeets 7-8 inches long and weighing about 45 grams. They live on average 15-20 years in excellent condition .

Their natural environment is warm and dry but Bourkes don’t usually require special heat. As with most birds, protecting them from weather excesses is always a good idea but on the other hand, they can live in a closed aviary with minimal complications.

The Bourkes have a pleasant character; they are friendly and non-aggressive. They are intelligent and also very quiet little birds, emitting delicate chirps that can drown out the sounds of zebra finches. They are great birds for anyone trying to start raising a member of the parrot family.

If they have been hand-fed, they bond very closely with the owners. But they are also able to keep busy when alone and not very active during the day, following the lifestyle of the wild. They need to spend some time out of the cage in controlled areas for exercise.

Personal experience has shown that parent-fed birds can be discreetly tamed by dedicating them time and patience and will gladly sit on your shoulder or arm or come to take food from your hand. In an aviary, they will live well with others, even with the smallest birds.

At times they can be intimidated by larger birds, but with experience, they can defend themselves when needed. It likes to climb into the aviary; trees are their favorite but unlike many parrots they are not chewers, therefore doing less damage. They also appreciate a baby bath, so they should have access to a bath and freshwater.

Remember that Bourkes often feed on the ground, so make sure the base of the cage is free of bacteria such as mold to prevent disease.

There are several mutations from the wild form of Bourke and the best known of these is the Bourke Rosa. These birds are pinker than wild specimens with little if any blue color on them and predominantly pink plumage.

There is also a rather widespread lutin mutation with all parts of the bluebird turning yellow and red eyes. Other less frequent mutations include ruby, opaline, cinnamon, Isabella, fallow and pale fallow.

Seeds, herbs, and plants make up their diet from the wild, as do fruits, berries, and insects. There are special seed mixes available for grass parakeets and Neophema, but they will gladly eat wavy parakeet seed mixes as well, with added processed seeds such as millet and saffron, fresh fruit, and vegetables.

Sprouted seeds are another highly recommended option for a Bourke’s diet. These have more nutritional values ​​than normal seeds as the fat contained in the seeds is used during germination, thus leaving only the good parts. They will also enjoy kale, spinach, broccoli, lettuce, chard, grated carrot, corn, and fruit such as pear, banana, grape, and apple. They will also appreciate herbs such as thistle, dandelion, Chickweed, and sowing herbs.

It’s also helpful to give them access to vitamins such as calcium so that they can take them on their own when they need it. For the female, it’s important during the breeding period but also for the general health of the feathers and to aid digestion.

Their ideal nesting place is in a tree hole, usually in an acacia or casuarina about one meter below the ground, typically 9 x 9 x 15 inches. They do not have a specific feeding time in captivity while in the wild it is from August to December. Because of this, they can be relatively fertile once in pairs.

In wild conditions, Bourkes lay 3-6 eggs which the female hatches for 18-19 days. During this period it’s fed by the male and occasionally moves away from the nest to exercise. The male will sit nearby and protect her, ready to defend her and the nest if necessary. The birds put their feathers at around 4 weeks, while the mother continues to feed them. Once feathered, the birds will be fed by their parents until 7-8 weeks of age and can be separated from them if required.

Bourkes are perfect birds to start with the parrot family, as they have a calm temperament and make little noise, living peacefully in various conditions. They can occupy a large cage or aviary and willingly share it with others with very little hassle. Their diet is straightforward, especially thanks to the new mixes designed for parakeets and a good balance of fresh food to help keep them healthy. There are very pleasant species that can be tamed even if not manually fed which will give you great satisfaction.