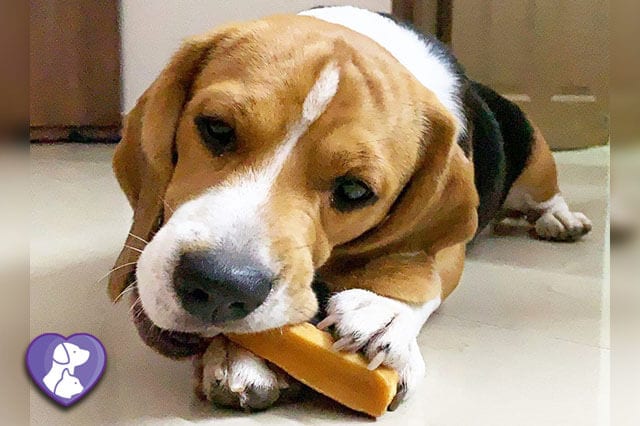 Anyone living with a dog is aware of how many strange attitudes a dog can exhibit. One among many is the tendency to not chew its food.

This behavior, even if natural for dogs, arouses much concern with the owner as there is the fear of the dog choking on the food.

But let’s see together why your dog might chew when it eats and what we can do about it.

Why doesn’t my dog ​​chew when it eats?

There are many reasons why a dog does not chew when eating its food from the bowl.

First, it must be said that this type of behavior is completely instinctive.

In fact, nature dogs living in packs,  tend to eat their portion quickly to avoid other dogs from stealing its food, and therefore they tend to eat fast and skip the chewing part.

In captivity, the dog can exhibit this behavior especially if it coexists with other dogs. A Dog could eat quickly and without chewing to prevent a “fight” with other four-legged friends.

Furthermore, even a metal or glass bowl can lead our furry friend to eat quickly without chewing. As the noise caused by the impact of the nose with the bowl or the movement of the latter can scare the dog.

Finally, another reason why a dog might exhibits this behavior is entirely biological. In fact, the esophagus of our four-legged friends is able to elongate making it possible for the dog to ingest large pieces at the same time.

However, even if not chewing food is a natural behavior of the dog, it’s not always the best behavior, especially associated with the fact that the dog eats quickly. As the dog may throw up whole food or choke.

My dog does not chew when it eats: what to do

As we said earlier, if a dog doesn’t chew and eat quickly it could be dangerous. What to do then?

To help your dog chew its food, you could first change Its bowl, a plastic one is preferable and larger so that the dog has only one layer of food.

It is also recommended to raise the food bowl so that the dog can feel more secure in his food and does not have to feel that its in a position to protect It from others.

After that, it would be wise to make sure that the environment in which the dog eats is relaxing.

You could also help your four-legged friend eat slowly and chew by moistening his food with water or giving him some wet food.

Finally, unless this behavior causes digestive problems in the dog, don’t worry it is a completely natural attitude.

How do you stop a dog from digging? 13 tips
Least effective method to retrieve a dog that has got off leash?
Understanding Dog Aggression Guide, Facts… | Everything you Need To Know
Why does my dog ​​follow me to the bathroom?
Can Dogs Be Gay? Myth or Reality