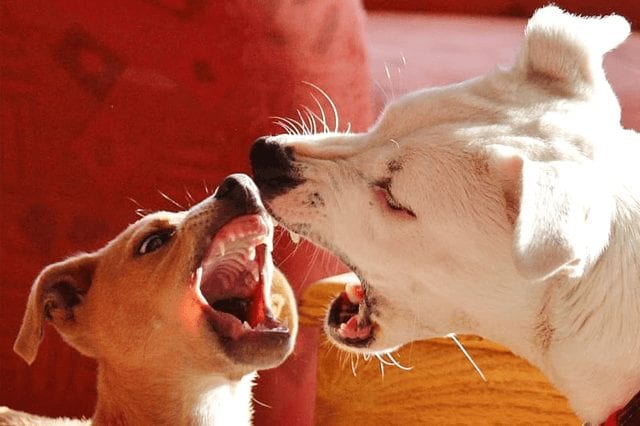 The aggressiveness of the dog is one of the most delicate subjects to deal with when it comes to training and canine behavior. Quite simply because when a dog happens to attack, whether it is a human or a fellow-creature, its emotional state is so catastrophic that it sees no other means than aggression.

This is of course disastrous and we suggest here that you understand how a dog can become aggressive, how to channel Its aggressiveness according to each situation but above all (and this is the most important) how to ensure that a dog does not come to such a point, in many cases, of inner malaise.

An “aggressive” dog is not born mean!

First of all, it seems important to us to specify that a dog will not be born aggressive. The so-called “bad” dog becomes aggressive for different reasons that we will discuss later. But know that a dog will always be aggressive for one (or more) reasons and that in many cases, it is human failures or repeated unconsciousness that leads a dog to find aggression as the only escape route.

The 8 Types of Aggression

In education and behavior analysis, we can distinguish 8 types of aggression in dogs. Indeed, the dog will always have a reason to bite. Before reaching such a point, it will emit, if it is sufficiently “coded”, a certain number of signals to prevent: such as grunting, showing teeth, licking its nose, etc. (unless the aggression is caused by fear).

However, if all these signals are not “read” or understood by the person or the dog concerned, the said “mean” dog will therefore have no other choice but to attack.

The aggressiveness of the dog by possessiveness

The aggressiveness of the dog by predation

Mainly concerning dogs which hunts for food or for those who have a very strong predatory instinct (hunting dogs and / or primitive dogs). This behavior can also be observed in dogs needing to control what is moving (a herd for example).

The aggressiveness of the “territorial” dog

This aggression concerns dogs whose mission (wanted or not by the owners) to guard/protect a space and therefore to scare away any intruders. This is part of the dog’s aggressiveness by possessiveness, mainly directed towards space.

This is called the instinct of guard, either the dog has it, or It does not have it and know that it is moreover forbidden to “mount a dog on the guard”.

However, custody should be limited to preventing and not assaulting. A guard dog is not a mean dog, it is a dog that warns and should only have a dissuasive role.

The aggressiveness of the dog by irritation

This aggression concerns dogs who are “at the end of the line” and who cannot get out of a situation that irritates them. Irritation is also often the main cause of attacks on children, for example.

This is because children rarely have the ability to read dogs’ warning signs and this causes dogs to aggress to get out of certain irritating situations for them.

Hence the importance of establishing rules of life for all members of the family with regard to contact with the dog.

The aggressiveness of the dog out of fear

In our opinion, this aggression is certainly the most difficult to manage because when a dog attacks out of fear, it generally does not warn its “victims” at all. This makes a dog aggressive out of fear a dog that can be completely unpredictable.

This aggression concerns of course mothers who want to protect their young cubs.

The aggressiveness of the dog by pain

This aggression concerns sick, injured, and/or elderly dogs. The nicest dog in the world might be aggressive following an injury to protect Itself and avoid further pain. This is clearly an attitude of protection, of survival, from the point of view of the dog and it does not mean that the dog should then be labeled as “aggressive” afterward.

The aggressiveness of the dog re-directed

This aggression is quite common and is often not voluntary. These are dogs who are irritated by a situation and who will therefore vent their emotional excess on the first individual. The goal of re-directed aggression is therefore to restore a stable emotional state, by any means.

So we’ve seen the different types of aggression, which should normally give you an idea to possibly understand your dog’s aggressive behavior (if that’s your case). But we suggest you see with us other causes that can lead a dog to be aggressive.

The Main Causes Of Aggressive Behavior

(other than the 7 types of aggression mentioned above)

These dogs are recognizable in the litter because they are the ones that will not come towards you full of spirits, they will often be hidden under furniture and will not appreciate the contact.

Know how to read and understand the signals emitted by the dog.

Indeed, naturally, a dog will seek to avoid conflict rather than provoke it. Thus, it is important to know how to decode all the signals sent by the dog, in particular, to avoid attacks on humans.

Regarding interactions and potentially aggression between dogs, this is where the importance of good socialization comes into play because a dog who will have communicated from an early age with other dogs will thus be able to know and use the canine codes to communicate with its congeners and therefore, a fortiori, avoid conflicts.

Some examples of signals that can alert you to a dog’s ill-being: It will yawn, look away, lick Its nose (be careful, if the licks are repeated and rapid, this translates to an illness such as aggression is not far away).

Then there are of course the warning signs: barking, growling, “smiling” or even quick nose licking and repeated as mentioned above.

We have partially mentioned it previously, but we would like to remind you here of the importance of good socialization to allow the dog to experience different situations. Always assume that a dog will be afraid of what It does not know.

Thus, allow your dog to meet as many dogs as possible (being almost certain that it will go well, of course, the encounters must above all be controlled ), but also a multitude of different situations and environments: the city, the forest, the market, the car, importable noises, different people, atypical objects, etc

Have a relationship of trust and mutual respect with your dog

Know that your dog must consider you as Its referent, Its “guardian”, you must therefore play this role! So, have a consistent attitude, well-defined daily rules of life, and above all: have confidence in yourself and your dog! If you are already 1000% sure that everything will go well, this will not necessarily solve all the problems, for all the situations, but believe us, the process will be different! Quite simply because you will impose a framework and a reassuring attitude on your dog.

And finally, let’s see how to resolve an already installed aggressiveness. Whether it is an aggression on humans, objects, or congeners.

It’s of course necessary to find the cause of the aggressiveness of the dog in question in order to understand it.

Avenues depending On The Various Context Of Dog Aggression

Thus, care should be taken to teach the dog indications such as walking on a relaxed leash, “fixed”, not moving, and all static indications in general. In addition, the posture and placement of the handler will be essential to work on non-verbal communication with Its dog as well.

Aggression can be caused by a genetic or medical problem! Thus, it will always be good to go to your veterinarian in case of aggressiveness that is not understood/explained. Note that for 60% of dogs who develop aggressive behaviors at the time of puberty, this is due to a genetic problem.

In addition, in many cases, these are problems related to the thyroid and treatment is available (treatment for hyperthyroidism). So don’t wait any longer and go see your veterinarian to rule out any genetic or medical problem.

Finally, to conclude, in our opinion the main thing to do when you have an aggressive dog is to really be aware of it and not see it as inevitable! There are solutions that, while sometimes failing to completely solve the problem, can alleviate it and make your life, and especially your dog, easier.

Do not hesitate to call on a behavioral dog trainer, or to ask your veterinarian for advice if It has any notions of canine behavior,  and above all do not give up! Each aggression will be treated in a different way depending on the character of the dog, the proposed lifestyle, and the attitude of the owner. So there is no magic recipe so don’t be afraid to ask for help!

Why Doesn't My Dog Chew His Food?
How do you stop a dog from digging? 13 tips
Why do dogs wag their tails?
Why does my dog ​​follow me to the bathroom?
Least effective method to retrieve a dog that has got off leash?