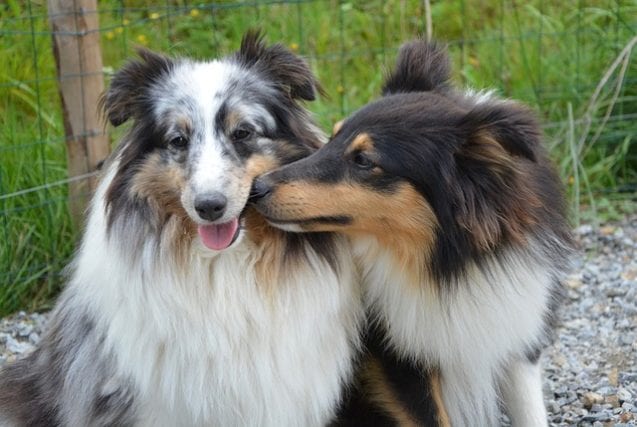 The question about the sexual orientation of dogs is likely to arise in the mind of a caregiver who has just discovered how their dog rides or is ridden by another male dog. But not all riding sequences have to do with reproduction.

And it is that, in the field of sexuality, we usually fall in the comparison of canine behaviors with humans. In other words, we humanize dogs. We resolve the doubt below.

These are sexuality, which, again the scientists, explain as the sexual appetite, and reproduction, which is defined as the action and effect of reproducing. With all these concepts in mind, let’s now look at canine behavior in this area.

Sexual behavior and reproduction of dogs

Male dogs do not have a marked heat period as it does in females, which is receptive only in certain periods that take place approximately every 5-6 months. On the contrary, males will be able to reproduce as long as they detect a female in heat. And that’s the key.

If in human beings we talk about sexuality and intimate relationships can be established at any time, regardless of reproduction and, in addition, with an emotional component, in dogs, the sexual drive is only reproductive.

In males, it is triggered only in the presence of the female’s hormones that send the message that it is receptive to mating and the consequent reproduction and perpetuation of the genes of the species.

My dog ​​rides other dogs

A male’s riding behavior over another is not synonymous with its being homosexual. It is also common to see it riding cushions, its bed, other animals, or human legs. It can even be mounted to another specimen by the head.

And it is that riding is not only a behavior linked to sexual hormones. This behavior in animals has been related to dominance, but also to the reinforcement of social relationships within the group or between individuals.

It is relatively common to observe these mounts, which can also be seen among females, in puppies with playful intentions, or, at any age, in dogs in need of releasing energy. It should also be taken into account that riding can be pleasant, which serves to reinforce the behavior and, therefore, repeat it.

What do I do if my dog ​​rides others

In principle, a punctual riding behavior is not worrisome. But if this does not stop repeating itself, the dog bothers people or other animals or is a sign of stress, it is necessary to intervene. The best way to avoid this type of riding is to stop it as soon as it starts.

Also, if it mounts our leg or that of another family member, we will have to interrupt the behavior and simply walk away. We can try to divert its attention to another game, but if it insists, you have to cut it off. After repeating this sequence several times, we will always weaken that behavior.

We can reward all its positive behaviors so it knows where to direct its energy. If the mounts indicate stress, review their living conditions and, if it does not improve, consult a canine behavior professional or ethologist. Of course, neutering is recommended as part of a responsible trend for both males and females.

How do you stop a dog from digging? 13 tips
Why does my dog ​​follow me to the bathroom?
Least effective method to retrieve a dog that has got off leash?
Why Doesn't My Dog Chew His Food?
Understanding Dog Aggression Guide, Facts… | Everything you Need To Know