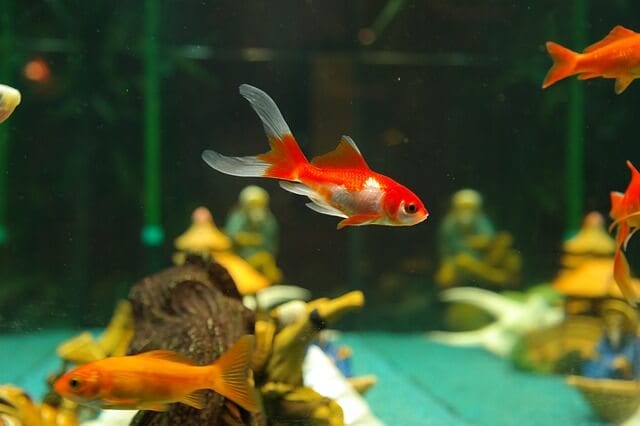 So you have discovered that goldfish cannot live in bowls and need a tank to be happy and live their life healthily.

The question arises: what size should the goldfish tank be? Glass aquariums come in different shapes and sizes, and it can become difficult to figure out which would be best for you and especially the fish. Here is a useful guide to choosing the right size tub.

Contents hide
1 Do goldfish need a large tank?
2 The golden rule of goldfish
3 Some useful tips:

Do goldfish need a large tank?

Goldfish cannot live a normal life in small containers they also need room to maneuver! Just as a person couldn’t live well in a small closet all their life, neither could a goldfish. Most people are surprised when they first learn how big goldfish can get. Fancy goldfish (the split or “double tail” type) can easily reach 6 to 9 inches in length.

Single-tailed varieties (such as the Common, Comet, Shubunkin, and Wakin) will grow more than twice as large, which is why these types do best in a 370-plus gallon tank or, ideally, a pond. If you want to promote the healthy growth of goldfish, the fish will need some space. You can’t have a tank that is too big when it comes to keeping goldfish. The bigger the better … especially from your fish’s perspective.

Contrary to popular belief, larger tubs actually require less work than smaller tubs. You see, the water in a small tub gets dirty much faster than it does in a larger tub, which means you will need to change the water more frequently with a small tub. Goldfish constantly produce a toxin called ammonia, which is very dangerous in small quantities and lethal in larger quantities.

Making water changes is the only way to keep the tank free of pollution and water changes make up most of the “dirty work” when it comes to keeping goldfish, as you will quickly discover if you don’t already do. So please don’t be intimidated by the thought of having a bigger tub if you are used to small ones. The fish will thank you for it.

The golden rule of goldfish

For fancy goldfish, the general rule is 75 liters for the first fish, then 30 liters for each additional fish. Single-tailed fish need a lot more space, and at least 150 liters per fish are required (a pond would be better).

Many of you reading this may not be following this rule at the moment. I certainly didn’t, when I was learning how to keep goldfish. As a goldfish enthusiast, I wanted almost all the goldfish I saw, and bought almost all the goldfish I wanted, and ended up owning 8 fancy fish at one time. It was a disaster for my 40-liter aquarium. I couldn’t keep ammonia in check and I could never do enough water changes to keep up with a load of waste being sucked into my filter.

Worse still, my fish were constantly sick and dying. But because I (selfishly) loved goldfish so much, I didn’t want to give up my collecting habits to fit the size of my tank. I had to learn my lesson the hard way when I lost all my goldfish one after another until there was none left which was unfair to them and stressful and depressing for me. Please don’t make the same mistakes I did! I know it sounds dramatic, but it’s really a matter of life and death for your fish.

Do things right the first time and follow the golden rule of goldfish.

If you’re not following the general rule, start doing it. Spend the money and buy a bigger tank if your fish are already in excess. If you can’t afford it or don’t have room for a larger tub, consider bringing some back or giving them to someone who has space. Sometimes the hardest decision has to be made for the greater good of the group.

1) Decide how many goldfish you want BEFORE you buy the tank. This will prevent you from getting stuck with a tub that is too small when you want to expand your collection.

2) If money is an issue when it comes to choosing a tank, try looking at flea markets or second-hand shops and get a used aquarium. This can help you save a lot and usually, you will also find aquariums that work quite well that very often also have equipment and accessories.

3) Stick to the plan. Once you’ve got your tank, don’t go crazy buying goldfish left and right. Do not keep adding fish to the tank if it’s completely full for the golden rule of goldfish. If you want to catch more goldfish, increase the size of your tank along with their number.

4) Here is the best advice so far: buy the largest tub you can afford! I’m serious! Save money, ask for a raise, mow lawns, do what you need to do to buy a good-sized tub. If you are crazy about goldfish, you will want a big family!

Remember that your goldfish will thank you for giving them enough space and reward you by growing big, strong, and healthy.

Even better, you won’t have to worry or stress about why your fish are always sick or fighting. You are doing yourself a favor when you take a big house for them.

Can I Keep Goldfish With Other Fish?
How To Tell If Your Goldfish Is Sick: a Complete List of Symptoms
The Best Floating Plants For Aquariums (beginner's guide)
Is My Goldfish Pregnant?
Can Turtles And Fish Live in The Same Tank?