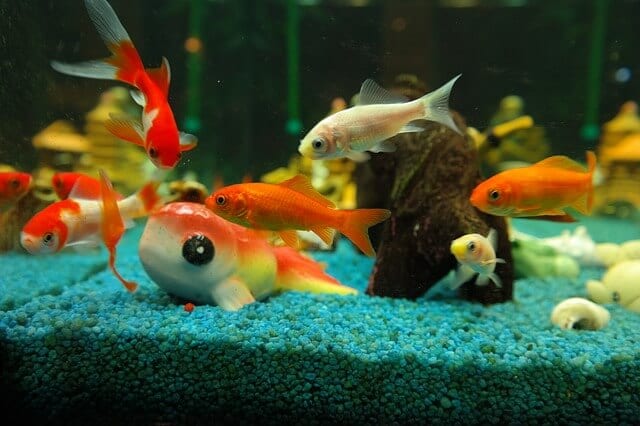 Are you considering getting some colorful guppies to add some variety to your goldfish tank? Have you fallen in love with the elegant angelfish in the pet shop at the end of the road? In this case … you should read the rest of this article which could save you (if you listen) from total disaster.

What are tropical fish?

Tropical fish are a common type of fish of both fresh and saltwater. Tropical freshwater fish include Angelfish, Neon Tetras, Gouramis, Guppies, Plecostomus, Mollies, Bettas, Oscars, and others.

Since saltwater fish would die in freshwater they obviously cannot be kept with goldfish, in this article we will focus on freshwater varieties, describing whether or not they are good companions to our beloved goldfish.

Can i keep goldfish with tropical fish?

Based on my personal experience I can directly tell you that no, goldfish and tropical fish should not be kept together for various reasons. While some might argue that they are both freshwater fish, there are other factors to consider besides salinity that cause one or the other species to be compromised.

To give goldfish the best possible treatment, you need to avoid compromising their needs. Managing all the various needs of the newly added minnows will only cause unnecessary stress overload, even if maybe for a while it might work.

The sad truth is that you may be killing your goldfish! Even with so many years of experience, protecting goldfish is already difficult at a basic level, without considering the additional challenge of keeping other fish happy.

Reasons why you shouldn’t keep goldfish with other fish:

You will probably not like this answer, but for the sake of honesty and for the sake of your fish I will list the reasons why. First of all, it is very important that you understand that goldfish are not tropical fish. I myself have tried to keep goldfish with guppies and bettas, and have learned some basic lessons.

1) Just because two species of fish are freshwater doesn’t mean they can live well with each other. Aggression often becomes a problem, as goldfish have an appetizing mucous coating that other fish like to nibble on.

The sucking fish attach themselves to the sides of the goldfish to feed! This obviously puts your goldfish under a lot of stress due to continued harassment and the loss of their mucous lining combined with severe damage to the scales can cause disease. Even if your goldfish is large, that doesn’t mean it won’t be targeted! As they are “gentle giants”, they will not defend themselves.

Indeed, once the goldfish has become big enough your little ones may be even more attracted to it and decide to have a snack! Eccentric varieties can reach 5-8 Inches while single tail fin varieties can be even larger! In contrast, tropical fish remain relatively small throughout their life.

A goldfish will eat anything that fits their mouth and even if they cannot be called “hunters”, over time the number of tropical fish will reduce as goldfish will have no qualms about eating them! Incredible how the situation turned around, right?

2) The thermal requirements for these two types of fish are totally different. Goldfish live in cold waters, being native to cold streams and ponds where winter temperatures drop quite a bit. Tropical fish, on the other hand, live in warm waters whose temperatures range from 70 to 76 ° F – far too hot for our goldfish! If these parameters are not respected, tropical fish tend to lose their vibrant colors and deteriorate in health, so it is necessary to constantly control the water temperature through a thermostat.

Even if goldfish can tolerate these temperatures for a set period of time, they will start having long-term health problems. It would be like wearing a winter sweater all year round – it’s nice in cold weather, but in the summer you’d start to feel sluggish.

3) Increase the amount of waste in the aquarium. Even the smallest fish contribute to the overall litter levels in an aquarium and if you are not insightful your water can have problems with ammonia. In addition, the small fish increase rapidly in number (especially Guppy!). If your tank isn’t big enough, you may run into problems. It is quite difficult to keep goldfish and tropical fish together as they both have different needs!

4) Feeding becomes complicated. There are no different diets for different fish species, but competition is stressful for both you and them. Watching the bigger, dominant fish gorge on all the food while the little ones get nothing is rather irritating. Who got what? And how much? These are just some of the concerns you will need to manage in this situation.

Before making a decision, first, consider your fish’s best interests. I know it can be difficult for us fish lovers to resist, but remember that your choices will affect their lives, and it’s better to follow the old saying ” an ounce of prevention is better than a pound of cure .” The damage and stress aren’t worth it.

But if you want tropical fish at all costs and don’t take no for an answer, your best bet is to get another aquarium. This way you can create a totally different environment for tropical fish without disturbing the goldfish and at the same time, you will be able to enjoy the presence of another species of fish in your home.

The Best Floating Plants For Aquariums (beginner's guide)
Can Turtles And Fish Live in The Same Tank?
What Size Should The Goldfish Tank Be?
Is My Goldfish Pregnant?
Do fish vomit? A curiosity to be discovered