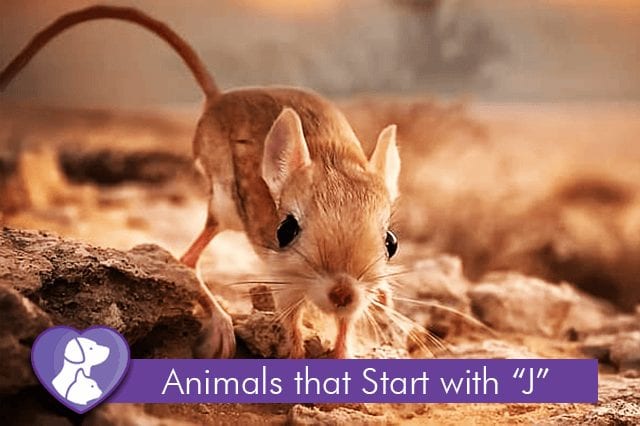 Are you looking for animal names that start with the letter J? The biodiversity of planet Earth is amazing and even tho we must mention that we do not know all the species belonging to the Animal Kingdom, although the truth is that those that we have discovered are very numerous.

That is why a good way to explore our fauna is to know the different animals by dividing them according to the letter by which their names begin, this being also a very educational activity for the children, but perfectly compatible with adults.

We encourage you to continue reading this article if you want to know all the names of animals that begin with the letter J, do not miss the selection that we have prepared for you.

If we take into account all the animals that live with us on planet Earth, we can affirm that those whose name begins with the letter J represent a true minority, however, they are worth mentioning and discovering, since you probably do not know some.

The jabiru is a large stork found in the Americas from Mexico to Argentina, except west of the Andes. It sometimes wanders into the United States, usually in Texas, but has been reported as far north as Mississippi. It is most common in the Pantanal region of Brazil and the Eastern Chaco region of Paraguay

The jacamars are a family, Galbulidae, of near passerine birds from tropical South and Central America, extending up to Mexico. The family contains five genera and 18 species.

The jacanas are a group of tropical waders in the family Jacanidae. They are found in tropical regions around the world. They are noted for their elongated toes and toenails that allow them to spread out their weight while foraging on floating or semi-emergent aquatic vegetation.

The Chilean jack mackerel sometimes called the Inca scad or Peruvian jack mackerel is a species of jack mackerel in the genus Trachurus of the family Carangidae. Since the 1970s, it has become one of the world’s more important commercial fish species.

The Pacific jack mackerel (Trachurus symmetricus), also known as the Californian jack mackerel or simply jack mackerel, is an abundant species of pelagic marine fish in the jack family, Carangidae.

The species is distributed along the western coast of North America, ranging from Alaska in the north to the Gulf of California in the south, inhabiting both offshore and onshore environments.

The Jack Russell Terrier is a small terrier that has its origins in fox hunting in England. It is principally white-bodied and smooth, rough or broken-coated, and can be any color.

Jackals are medium-sized omnivorous mammals of the subtribe Canina, which also includes wolves and domestic dogs.

The black-tailed jackrabbit, also known as the American desert hare, is a common hare of the western United States and Mexico, where it is found at elevations from sea level up to 10,000 ft

Jaeger, are any of three species of seabirds belonging to the genus Stercorarius of the family Stercorariidae. They are rapacious birds resembling a dark gull with a forward-set black cap and projecting central tail feathers.

The jaguar is a large felid species and the only extant member of the genus Panthera native to the Americas. The jaguar is the largest cat species in the New World and the third-largest in the world. Due to convergent evolution, it closely resembles the leopard but is usually larger and sturdier.

The jaguarundi is a wild cat native to the Americas. Its range extends from central Argentina in the south to the US–Mexico border in the north, through Central and South America east of the Andes. The jaguarundi is a medium-sized cat of slender build.

The Japanese macaque, also known as the snow monkey, is a terrestrial Old World monkey species that is native to Japan. They get their name “snow monkey” because some live in areas where snow covers the ground for months each year – no other non-human primate is more northern-living, nor lives in a colder climate.

Jays are several species of medium-sized, usually colorful and noisy, passerine birds in the crow family, Corvidae. The evolutionary relationships between the jays and the magpies are rather complex.

Jellyfish and sea jellies are the informal common names given to the medusa-phase of certain gelatinous members of the subphylum Medusozoa, a major part of the phylum Cnidaria

Jerboas are hopping desert rodents found throughout Arabia, Northern Africa, and Asia. Jerboas form the bulk of the membership of the family Dipodidae. They tend to live in hot deserts. When chased, jerboas can run at up to 24(14Miles) kilometres per hour. Some species are preyed on by little owls in central Asia.

John Dory, St Pierre or Peter’s Fish, refers to fish of the genus Zeus, especially Zeus faber, of widespread distribution. It is an edible demersal coastal marine fish with a laterally compressed olive-yellow body which has a large dark spot, and long spines on the dorsal fin.

Junco is a small North American bird in the New World sparrow family Passerellidae. Junco systematics are still confusing after decades of research, with various authors accepting between three and twelve species.

The jungle cat also called reed cat and swamp cat, is a medium-sized cat native to the Middle East, South and Southeast Asia, and southern China. It inhabits foremost wetlands like swamps, littoral and riparian areas with dense vegetation.

The juniper mountain vole is a species of rodent in the family Cricetidae. It is found in Afghanistan, China, Pakistan, and Tajikistan.

Names of extinct animals with the letter J

It’s also necessary to mention those animals that have already become extinct, considering extinction the death of the last individual belonging to a certain species.

In this case, the extinction of these animals is not related to humans, since all of them are dinosaurs.

What do you think of all the animal names with the letter J that we have shown you in this article? We hope that this information has been very useful for you, however, if you want to make any contribution or suggestion, do not hesitate to send us your comments as we will be delighted to receive them.