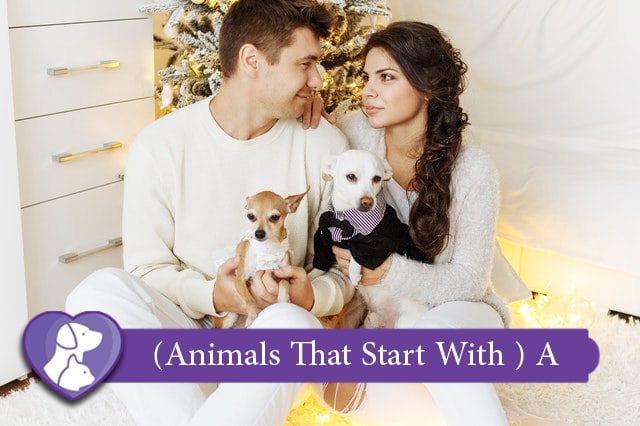 Are you looking for animal names that start with the letter A? You must bear in mind that the biodiversity of planet earth is surprising, having discovered a total of 1 million 729 thousand species within the Animalia kingdom, although it is considered that there may be many more.

In this article, you will find all the names of animals that begin with the letter A arranged alphabetically, and not only of those species that live with us but also of those that for various reasons have come to be considered extinct species.

The Aardvark, sometimes called the land pig by translation of its name in Afrikaans is an essentially termitivorous mammal of Africa, which plays an important ecological role in controlling the expansion of populations of termites. It is not, however, an anteater.

The aardwolf is an insectivorous mammal, native to East and Southern Africa. Its name means “earth-wolf” in Afrikaans and Dutch. The aardwolf lives in the shrublands of eastern and southern Africa – open lands covered with stunted trees and shrubs. It is nocturnal, resting in burrows during the day and emerging at night to seek food.

The Abyssinian also called bunny Cat ( Cat rabbit ), or sometimes Aby, is a breed of cat native to Asia. This cat is characterized by a short-haired dress with a ticked tabby pattern.

Accentors are small, inconspicuous, streaked birds, with sharp, pointed bills and a slightly robin-like, pot-bellied shape. They live mostly close to the ground, with a quick, shuffling and hopping action when feeding.

The addax, also known as the white antelope and the screwhorn antelope, is an antelope of the genus Addax, that lives in the Sahara Desert

The Adelie penguin is a species of penguin common along the entire coast of the Antarctic continent, which is its only habitat. It is the most widely spread penguin species, as well as the most southerly distributed of all penguins, along with the emperor penguin.

The Affenpinscher is a small dog, compact, wirehaired, which has the distinction of having a simian expression (which evokes the monkey) with Its hair wreath around Its head.

The African buffalo or Cape buffalo is a large sub-Saharan African bovine, The Cape buffalo, is the typical subspecies, and the largest one, found in Southern and East Africa

The African wild donkey or African wild ass is a wild member of the horse family, Equidae. This species is believed to be the ancestor of the domestic donkey, which is usually placed within the same species. They live in the deserts and other arid areas of the Horn of Africa, in Eritrea, Ethiopia, and Somalia

The African wild dog also called the painted dog, or Cape hunting dog is a canine native to sub-Saharan Africa.

The Agama is the name of a genus of small-to-moderate-sized, long-tailed, insectivorous Old World lizards, and also is one of their common names. The genus Agama includes at least 37 species in Africa, especially sub-Saharan Africa, where most regions are home to at least one species.

The term agouti or common agouti designates several rodent species of the genus Dasyprocta. They are native to Middle America, northern and central South America, and the southern Lesser Antilles. Some species have also been introduced elsewhere in the West Indies

The Akita is a large breed of dog originating from the mountainous regions of northern Japan. There are two separate varieties of Akita: a Japanese strain, commonly called Akita Inu or Japanese Akita, and an American strain, known as the Akita or American Akita

Albatrosses are very large seabirds in the family Diomedeidae. They range widely in the Southern Ocean and the North Pacific.

An alligator is a crocodilian in the genus Alligator of the family Alligatoridae. The two extant species are the American alligator and the Chinese alligator.

The alpaca is a species of South American camelid mammal. It is similar to, and often confused with, the llama. However, alpacas are often noticeably smaller than llamas. The two animals are closely related and can successfully crossbreed

The Alpine ibex, also known as the steinbock, bouquetin, or simply ibex, is a species of wild goat that lives in the mountains of the European Alps.

The American black bear is a medium-sized bear native to North America. It is the continent’s smallest and most widely distributed bear species. American black bears are omnivores, with their diets varying greatly depending on season and location

The American Tree Sparrows are busy visitors in winter backyards and weedy, snow-covered fields across southern Canada and the northern United States. Hopping up at bent weeds or even beating their wings to dislodge seeds from grass heads, they scratch and peck the ground in small flocks, trading soft, musical twitters

Anacondas or water boas are a group of large snakes of the genus Eunectes. They are found in tropical South America. Four species are currently recognized.

An anchovy is a small, common forage fish of the family Engraulidae. Most species are found in marine waters, but several will enter brackish water, and some in South America are restricted to freshwater.

The Andean mountain cat is a small wild cat native to the high Andes that has been listed as Endangered on the IUCN Red List because fewer than 2,500 individuals are thought to exist in the wild.

The Angelfish is a small genus of freshwater fish from the family Cichlidae known to most aquarists as angelfish. All Pterophyllum species originate from the Amazon Basin, Orinoco Basin, and various rivers in the Guiana Shield in tropical South America.

The anhinga, sometimes called snakebird, darter, American darter, or water turkey, is a water bird of the warmer parts of the Americas. The word anhinga comes from the Brazilian Tupi language and means “devil bird” or “snake bird”

Anolis is a genus of anoles, iguanian lizards in the family Dactyloidae, native to the Americas. With more than 425 species, it represents the world’s most species-rich amniote tetrapod genus

The Anteater is a common name for the four extant mammal species of the suborder Vermilingua commonly known for eating ants and termites.

The term antelope is used to refer to many species of even-toed ruminant indigenous to various regions in Africa and Eurasia. Antelopes comprise a wastebasket taxon within the family Bovidae, encompassing all Old World ruminants that are not bovines, sheep, or goats.

The archerfish form a monotypic family, Toxotidae, of fish known for their habit of preying on land-based insects and other small animals by shooting them down with water droplets from their specialized mouths

The Arctic fox, also known as the white fox, polar fox, or snow fox, is a small fox native to the Arctic regions of the Northern Hemisphere and common throughout the Arctic tundra biome. It is well adapted to living in cold environments and is best known for its thick, warm fur that is also used as camouflage

The Arctic hare is a species of hare highly adapted to living in the Arctic tundra and other icy biomes. The Arctic hare survives with shortened ears and limbs, a small nose, the fat that makes up close to 20% of its body, and a thick coat of fur

The Arctic tern is a tern in the family Laridae. This bird has a circumpolar breeding distribution covering the Arctic and sub-Arctic regions of Europe, Asia, and North America.

Armadillos are the only living mammals that wear such shells. Closely related to anteaters and sloths, armadillos generally have a pointy or shovel-shaped snout and small eyes. They vary widely in size and color, from the 6-inch-long, salmon-colored pink fairy armadillo to the 5-foot-long, dark-brown giant armadillo.

Arowanas are freshwater bony fish of the family Osteoglossidae, also known as bony tongues. In this family of fish, the head is bony and the elongated body is covered by large, heavy scales, with a mosaic pattern of canals.

The Asian black bear, also known as the Asiatic black bear, moon bear, and white-chested bear, is a medium-sized bear species native to Asia that is largely adapted to an arboreal lifestyle

Auks are medium-sized seabirds with barrel-shaped bodies, short tails, small wings and short legs set far back on the body.

The Australian magpie is a medium-sized black and white passerine bird native to Australia and southern New Guinea. Although once considered to be three separate species, it is now considered to be one, with nine recognized subspecies

Is a large, slender shorebird with a long, upturned bill, a long neck, and a round head. Its oval body sits atop long legs.

Extinct Animal Names That Begin With The Letter A

An animal species is considered extinct when the last individual belonging to its species dies, this fact occurs on numerous occasions for causes directly linked to humans, however, on other occasions, environmental phenomena are the cause, as is the case of dinosaurs.

The list that we will show you below contains the names of extinct animals that begin with the letter A, some of them have recently become extinct, but as you can see, we will also cite names of dinosaurs, and in this case, we are talking about extinction that took place millions of years ago.