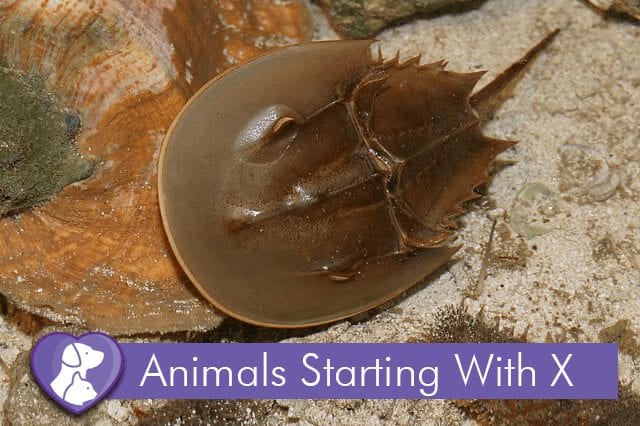 Are you looking for animal names that start with the letter X? Perhaps you have started this search by initially thinking that there was no animal that began with this letter since it is not the most common or used in the Latin alphabet, but you will be surprised to know that there are species whose generic name begins with the letter X.

If you want to find out what are the names of animals with the letter X, be sure to read this article.

Currently, there are only 9 animal species whose generic name begins with the letter X, of course, there could be many more (we do not know the totality of the biodiversity of our planet), but they have not yet been discovered and consequently, they have not been named.

Xiphosura is an order of arthropods related to arachnids. They are sometimes called horseshoe crabs. They first appeared in the Hirnantian. Currently, there are only four living species. Xiphosura contains one suborder, Xiphosurida, and several stem-genera.

The Xoloitzcuintle , or Xolo, also known as the Mexican hairless dog, is one of several breeds of hairless dog. It is found in Standard, Miniature, and Toy sizes. The Xolo also comes in a coated variety and coated and hairless can be born in the same litter. It is characterized by its lack of hair, wrinkles, and dental abnormalities.

Xenops is a genus in the bird family Furnariidae, the ovenbirds. The genus comprises three species of xenops, all of which are found in Mexico, Central America, and South America, particularly in tropical rain forests.

Xenarthra is a major clade of placental mammals unique to the Americas. There are 31 living species: the anteaters, tree sloths, and armadillos. Extinct xenarthrans are the glyptodonts, the ground sloths, and the aquatic sloths. Xenarthrans originated in South America during the Paleocene about 59 million years ago.

Xantus’s hummingbird is a medium-sized hummingbird endemic to the Baja California Peninsula. It is 8–9 cm long, and weighs approximately 3-4 grams

Pristella maxillaris is a species of characin in the genus Pristella, and is commonly known as the X-ray fish or X-ray tetra because of its translucent body.

Sabine’s gull, also known as the fork-tailed gull or xeme, is a small gull. Its generic placement is disputed; some authors treat it as the sole species in the genus Xema as Xema sabini, while others retain it in the genus Larus as Larus sabini.

The xantic sargo or white seabream is a species of seabream native to the eastern Atlantic and western Indian Oceans. It’s found from the Bay of Biscay southwards to South Africa, including Madeira and the Canary Islands, the Mediterranean, and (rarely) the Black Sea.

Occasionally individuals are found off the Indian Ocean coasts of South Africa, Mozambique, and Madagascar, and they are very rarely found elsewhere in the Indian Ocean, such as off Oman. An active fish, they inhabit the surf zone, but they may be found down to 50 m.

All extinct animals whose name begins with the letter X should also be mentioned in this article, fortunately, in this list, we will not find any animal whose disappearance is directly linked to the activity of human beings.

This is because all these animals are genera of dinosaurs, obviously, they did not coexist with humans and the causes of their extinction were environmental, specifically the impact of a meteorite that fell in the area of ​​the Gulf of Mexico.

Here are the names of extinct animals that begin with the letter X.

What did you think of the animal names that start with the letter X that we have shown you in this article? As you may have seen it’s a tiny selection, so if you want to make any contribution or suggestion, do not hesitate to send us your comments as we will be delighted to receive them and they will also help us improve.